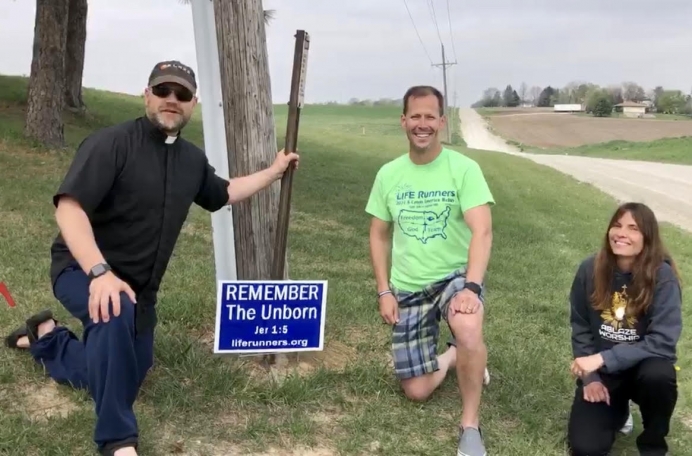 Fr. Michael Voithofer at the Ablaze House of Prayer, along with Pat Castle, and Bernadette Costello and the Life Runners "REMEMBER The Unborn sign" that helped baby Waylon's mother choose life Pat Castle

A sign in the right place and time with a message for life made the crucial difference for a pregnant mom who was at risk for abortion.

LIFE Runners is a ministry that seeks to be heroically pro-life by carrying the message, “REMEMBER the unborn” as a public witness. It is their goal to display the joy of the Lord on t-shirts, signs, and banners at running events and through other public pro-life witness as a testimony to Jesus, the author of life.

“We seek to activate pro-lifers to be vocal because it matters,” said Pat Castle, founder and president of Life Runners. “Our energies are targeted on equipping our team to translate what their shirt means. Not just speaking up, but doing it because it makes a difference.”

“Students for Life research found that 78% of women experiencing an unplanned pregnancy state that if one person had encouraged them, they would choose life,” Castle said. “So, through signs, t-shirts and encouraging our team members to be bolder and more courageous, we seek to be that one person.”

The story of baby Waylon is just one example of the effect the “REMEMBER the unborn” message can have on a pregnant mom.

Jessica was one such pregnant woman.

While taking her RV to a storage facility located at Ablaze House of Prayer, which raises funds by parking RVs at their location, she encountered a LIFE Runners sign and it prompted her to make a choice for life.

Ablaze founder Fr. Michael Voithofer had placed the LIFE Runners “REMEMBER the unborn” sign at the entrance of the Ablaze location where Jessica was headed.

Jessica’s unborn child had been diagnosed with Down syndrome and the child’s father threatened to leave unless Jessica aborted their child.

In her own words:

“I saw that sign. I was contemplating aborting my child because he was diagnosed with Down syndrome and the dad told me if I didn’t abort him, he would leave me.”

Jessica chose life for her baby and the baby’s father made good on his threat to abandon her and their child.

This child and his life have value regardless of any diagnosis - however, in this case the diagnosis was wrong, and Waylon Joseph was born - saved because someone was willing to advocate for him as an unborn child.

When this news was posted on the LIFE Runners Facebook page it included an invitation to contribute toward support for baby Waylon. People donated in response, and they were able to send Jessica a $300 gift card and team gear so now she and Waylon are official team LIFE Runners members.

Those who join LIFE Runners become part of a team of over 18,000 people in over 2,200 cities across 41 nations. Castle declares it to be the largest pro-life “team” in the world.

In November LIFE Runners participated in the Indianapolis Monumental Marathon. LifeSiteNews coverage of the event detailed the witness the “REMEMBER the unborn” banner had to thousands (13,000 runners and additionally spectators) of people.

The LIFE Runners team was asked to remove the banner by directors of the event. They respectfully refused noting it was public property and they were within their rights to display it.

In addition to seeking to intervene and defend children in the womb, the LIFE Runners group prays for the healing of the hearts of post-abortive women and men.

“Post-abortive teammates find wearing the message ‘REMEMBER the unborn’ very redemptive and hope to help others to not choose abortion,” noted Castle.

“Remembering so they don’t abort again and remembering the one who was aborted,” he said. “The child is named, mourned and remembered. That is the message.”

He remarked how healing is also necessary to stop the cycle of abortion.

“Healed people don’t go back to abortion facilities,” Castle said. “But hurt and wounded people are more likely to return to abortion again.”

“We believe if they receive healing before considering abortion again, they won’t choose it again if they have found healing and peace,” Castle told Pregnancy Help News. “So, we are always reaching out with compassion and praying for healing.”

Tweet This: We believe they won’t choose abortion again if they've found healing & peace. So we always reach out w/compassion & pray for healing.

A third of LIFE Runners are students. As part of a local team, they may be a remnant in their school, or some schools have had nearly every student and all staff members as part of the team.

“A student LIFE Runner has the chance of ever choosing abortion greatly reduced by being part of the team,” Castle pointed out.
The team cheer is “All in Christ for pro-life!” Members receive a monthly reminder to wear their team shirt the first Wednesday of each month.

“If you’re willing to be a public witness, join the team,” Castle said. “Go to the website join page. You would become a walking billboard for life. We will send you an email or text message reminder to wear the shirt each month.”

Running is actually optional for being a LIFE Runners member.

“If you would like to be a LIFE Runner, half the team never runs,” stated Castle. “Everybody wears the witness in the form of a shirt or jacket.”

The effect of this messaging can be seen across many communities, for example West Point, Nebraska, which has a population of approximately 3,300. If you visit there on the first Wednesday of the month, you will likely encounter the LIFE Runners message as this small town has over 500 members.

Castle earned his PhD in nano-analytical chemistry from the University of Illinois and is a board member at the Institute for Theological Encounter with Science and Technology.

He taught chemistry at the Air Force Academy and developed the ethics curriculum during his tenure. Castle also coached the marathon team.

These past experiences have inspired and informed his pro-life work.

“The most horrible thing imaginable is a child being starved to death,” he stated. “A medical or so-called chemical abortion (the abortion pill) starves a child to death. Equally horrific is the death of a child through surgical abortion which is the dismemberment of the child.”

Castle said the group’s approach is to make life attractive to the world, their actions reflecting the truth that life in Christ is victorious and that it is a gift.

“When we’re grateful, then things like suicide and abortion become less likely,” he said.

There have been times that the group has gotten into a bit of trouble for exuding too much joy.

“At a Life Chain event we were told we were too joyful,” Castle commented. The event is supposed to be a solemn, silent witness.

“But we respectfully disagree,” he said. “LIFE Runners choose to reflect that life is victorious in Jesus’ name.”

Looking ahead to 2022, LIFE Runners will hold coordinated 5k events across the U.S. in what Castle calls, “The largest spanning pro-life run in the world. Held from July 4 to August 7, in over 5,359 miles.”

There is more information about this event, team membership and other events at the LIFE Runners website.

Castle hopes to continue to grow the team and utilize social media with #RememberTheUnborn and other unifying opportunities to see more babies like Waylon born because of Jesus’ followers utilizing their public witness.