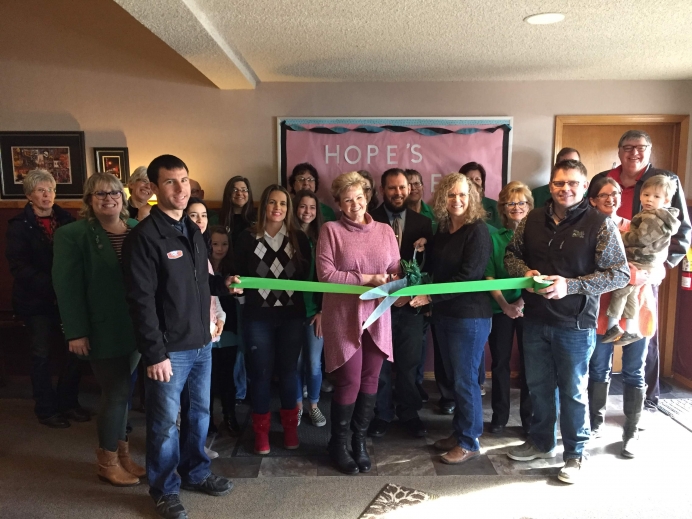 Hope's Place board members, Kansans for Life steering committee members and others at the Hope's Place ribbon cutting January 18

It was 1978 when Donna Swager first felt the call to help women facing an unexpected pregnancy.

That year, her sister had come home from college, concerned about a friend whose parents had abandoned her when they found out she was pregnant. Swager’s parents took the young woman under their wing and helped her through the experience.

Despite a nurse at the college who pressured her to abort, the young woman saw the pregnancy through and gave birth to her baby.

But after learning of the nurse’s insistence on an abortion, Swager’s mother felt compelled to do something more.

“My mom was like, ‘Okay, we've got to counter this somehow,’” Swager said. “And so she started a helpline.”

That’s why the pro-life community of Goodland, Kansas—a town about 40 miles west of Colby— rallied to open a brand-new pregnancy help center this January.

And four decades after her mother started the pregnancy helpline, Swager is the executive director of the new hub, known as Hope’s Place Pregnancy Support Center.

Now, the center, which was once a far-off dream for the local chapter of Kansans for Life, has become a reality thanks to Swager’s leadership, the supportive energy of the local community, and—last but not least—the major boost of a $30,000 matching grant from Heartbeat International designed to serve disadvantaged communities just like Goodland.

Not so good in Goodland

Nestled near the state’s western border with Colorado, Goodland is an agricultural community of about 4,400. There, people spend a lot of “windshield time” in search of shopping, entertainment and medical care.

The last item, medical care, is of the most concern to Swager. The nearest hospital that delivers babies is some 40 miles away, and if people are seeking specialized care, they will have to drive to Denver to find it.

“Unfortunately, if your income is very low or if you don't have reliable transportation, it's very crippling because we don't always have all of the services necessary,” Swager said.

Not only is the community isolated from maternity and prenatal care, it is also isolated from other pregnancy help centers, organizations designed to support women and men through the experience of an unexpected pregnancy.

That’s one of the reasons Hope’s Place was chosen as a candidate for a $30,000 grant by Heartbeat International in December. The program, known as Life Launch, is designed to inspire a new season of pregnancy help start-ups in under-served parts of the U.S.

Swager first came face-to-face with the dearth of pregnancy support services while working as the administrator of an assisted living center. There she employed a number of women who needed assistance navigating their pregnancies.

“There was just nothing out here to help,” she said. “We really scrambled to try to help them find even the state resources that they could use because so many of them aren't located in Goodland. And I just thought, ‘This is ridiculous. Why is it so hard?’ So in the back of my mind, I kept thinking, ‘Our women deserve to have more than this. They really deserve to have a positive message and a loving environment to be able to go into.’”

Swager was soon on her way to building exactly that for the women of Goodland and the surrounding communities.

A good goal for Goodland

After retiring from her job at the assisted living center a year and a half ago, Swager became the leader of her local Kansans for Life group. Driven by goals, she asked her fellow members for ideas for actionable items to help save lives.

One member said the group had always wanted to open a pregnancy center.

With that, the group set about determining the logistics of opening such a center with a feasibility study and prayer.

Every morning, Swager would go to her Catholic parish and pray, “Lord, show me how I can serve you today.” The recurring response that God seemed to be giving her was to open the pregnancy center.

“This kept coming up in my mind, and I said, ‘No, Lord, I want to retire and eat bon bons—I don’t want a project that’s that big,’” she said with a laugh.

But as big as the project seemed, it became more and more manageable with the faithful work of the group’s steering committee and the support of the Goodland community.

“When we started doing all of this, it's amazing the people that came forward,” Swager said. “It's amazing.”

At a harvest fundraiser, farmers would come out to buy dozens of meals for their crews. Different community members offered building space for the pregnancy center’s location. Folks began donating baby and maternity items for parents.

That faith became crucial when the group decided to apply for Heartbeat International’s Life Launch Grant.

In the beginning, Swager’s fellow Kansans for Life weren’t so sure about applying for the grant. Swager was. After all she had seen of God’s provision, she was convinced the grant could be theirs.

“It was just clear as a bell to me,” Swager said. “I didn't even know what all was involved in the grant. It's just something that jumped off the page and said, ‘Do it.’”

After much prayer, the group decided to go for it. In December, Swager received the answer they’d been praying for.

“Praise the Lord, we received the Heartbeat grant and it has been absolutely the most wonderful thing in the world,” she said. “It’s lifted the weight of the world off of our shoulders… I'm just so overjoyed and grateful to God for putting all of this in front of us, and making it possible to have this so that we can have a productive and fruitful experience.”

Tweet This: “Praise the Lord, we received the Heartbeat grant and it has been absolutely the most wonderful thing in the world”

“We were struck by their love for their Goodland community and the positive response received by local organizations and agencies,” she said. “While Goodland may be a smaller town, their community outreach can serve as an inspiration for the greater pregnancy help movement.”

In addition to in-person trainings, Life Launch recipients have access to resources such as Heartbeat International’s Pregnancy Help Starter Kit, fundraising webinars, and two years’ worth of web services.

Already, Swager has been inundated with manuals offering samplings of policies and procedures for her new center. Next month, the center will undergo a board training with some of Heartbeat’s pregnancy help experts.

So far, Swager has been most impressed with Heartbeat’s “LOVE Approach,” a manual which “teaches the principles of service in a life-affirming organization so that helpers feel more confident when they work with women in need.”

“It has just been phenomenal,” Swager said. “I am so impressed with that program and how well it has helped us relay to our volunteers the mindset… I have learned so much from this manual and in teaching other people, have just grown exponentially to be able to really step-by-step know what else to look for, what else to ask, where else to turn. So we have used that extensively, so that's wonderful.”

Right now, the center is open from 1 p.m. to 4 p.m. Monday through Friday. In the future, Swager says she plans to extend the hours from 10 am to 7 pm as they offer free pregnancy testing, options consultations, and parenting classes.

Down the road, the center will also offer post-abortion counseling services and obstetrical ultrasound scans. Swager is already anticipating the donation of an ultrasound machine from the Knights of Columbus later this spring.

In the meantime, Swager is continuing to build relationships with the local medical community, as well as the local college. She attributes the center’s success to the direction of the original Kansans for Life steering committee, as well as the board for Hope’s Place.

Going forward, she continues to count her blessings, grateful for the quiet assurance God has given her over the last several months.

“I just knew with all the confidence in God that this was our grant and we were going to get it,” Swager said. “And I know the naysayers were like, ‘This is an international company. Why in the world would they give it to Goodland?’ And I said, ‘Why would they not? It’ll come to Goodland. I just know this is our grant.’ And I have never, I don't think in my life, ever had that kind of quiet confidence in anything before.”

“But I know that this whole plan is God’s plan and I just felt very strongly that He was saying, ‘This is fine. It'll be fine,’” she said. “And it was. I just love it when things like that happen because I know it was all God. And the peace that He gives me in trying to direct this is just phenomenal. Just phenomenal.”