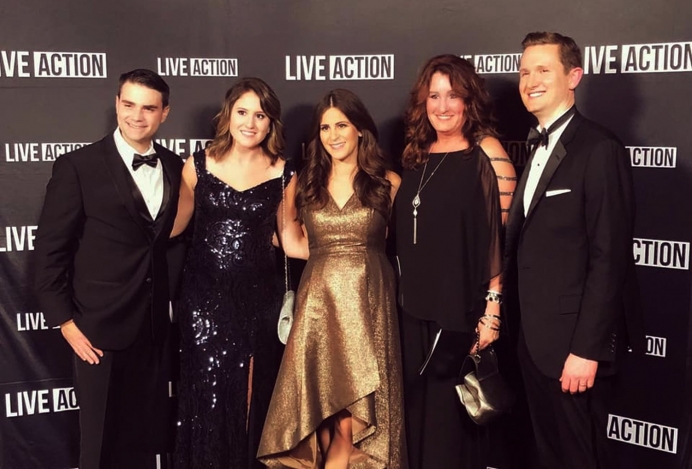 Alexis Helenbolt with Lila Rose, others at Live Action's Gala

A young Wyoming educator is taking her passion for life to the next level and the national stage, part of the ongoing wave of young people committed to defending sanctity of human life.

Today’s youth and young adults have become known as “the pro-life generation.” With a Gallup poll showing an increasing number of young people shifting to pro-life, elementary school teacher Alexis Helenbolt counts herself among that group, and her life reflects that change. Part of the millennial generation and once pro-choice, Helenbolt said two significant occurrences took place that caused her to reconsider her stance.

“After I had my first son and after New York passed that extreme abortion law, I began to question,” she said. “I was totally shocked by what happened in New York. I remember crying that night after I heard the news. So, I began to research. The more I found out about abortion, the more passionate (about pro-life) I became.”

That passion led her to pro-life causes, locally and nationally.

During her research, Helenbolt learned about pregnancy resource centers. She discovered True Care Women’s Resource Center, located about 50 miles from her community.

“Things like that aren’t spoken about in my circle, in my town,” she said. “I didn’t know True Care existed until I learned about pregnancy centers online.”

She attended a Vision Tour, a free, one-hour behind-the-scenes look at the ministry and signed up to volunteer. She spent part of her summer vacation serving as a patient advocate, meeting with women who experience unplanned pregnancies and educating them on their options. The work further stirred her pro-life passion.

Helenbolt didn’t stop there. In December 2019, she became the new chairperson for Natrona4Life, a pro-life organization that helps bring awareness about abortion, in the Casper and surrounding areas. Her group held a local March for Life on Saturday, January 18.

“It went very well, especially considering the weather,” Helenbolt said. “We believe there were more people attending than any other year, about 120.”

She led the March and spoke.

“We are a pro-love movement, not just pro-life,” Helenbolt said of Natrona4Life. “We care for the moms as well as the babies. I wanted to make that clear during our event. I also pointed out True Care and what the organization does for women – it’s amazing!”

Tweet This: “We are a pro-love movement, not just pro-life. We care for the moms as well as the babies.”

Helenbolt doesn’t limit her pro-life work to Wyoming. Last year she became an ambassador for Lila Rose’s organization, Live Action, and in the fall she attended Live Action’s gala in Los Angeles. She met Rose as well as others on the national pro-life stage, including Ben Shaparo.

“It was incredible!” Helenbolt said. “Lila was so sweet and loving, and I made many connections.”

As an ambassador, Helenbolt communicates the pro-life message and learned how to respond to pro-choice arguments.

“We have our own Facebook group and we help each other out,” she said.

Being a vocal pro-life supporter has cost her some friendships.

“It’s an unpopular opinion in my generation,” she said. “I’ve been unfriended (on Facebook), and other friends simply don’t want to talk about it. However, I do have great support with other friends, and my family is super supportive. In fact, my mom went with me to the Live Action gala, and she and I are going to Washington together.”

Pregnant with her third child due in April, Helenbolt had plans to attend the March for Life in Washington, DC last week as part of the Live Action group, with whom she’ll march.

She and her mother also planned to tour the nation’s capital, attend speeches, and visit the Women’s Expo. She wanted to meet with vendors and pro-life organizations in order to bring back ideas to implement into Natrona4Life.

“I want to find ways to grow Natrona4Life,” she said. “I want it to be known throughout Wyoming, to move the organization forward to include more than Natrona County. I want to partner with churches, True Care and other pregnancy centers, and the Students for Life group at the university (located in Laramie). Casper is centrally-located in our state, so it makes sense our group could make a big impact, including raising funds for True Care and other pregnancy centers and helping to direct women to those centers.”

She believes Natrona4Life can make a large, positive impact on the state, which has less population than a major U.S. city.

“I think we have a lot of opportunity to help pro-life become more known in our state,” Helenbolt said. “Wyoming is so rural … there’s not many people speaking out about abortion. The more knowledge you have on this issue, the more you can speak for life, for the dignity of the unborn and their mothers.”