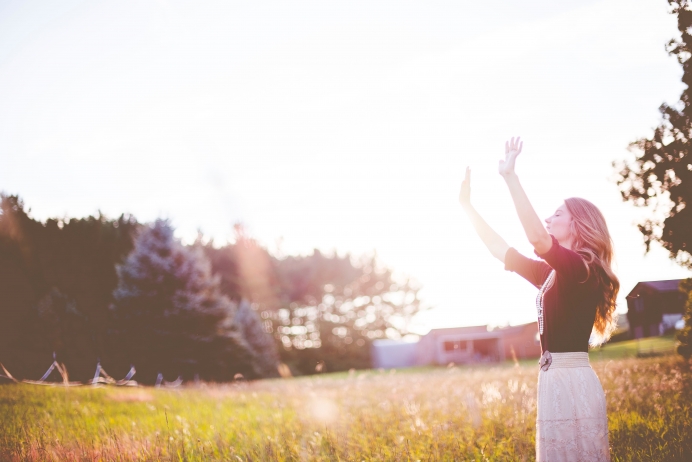 The theme of the pregnancy center fundraising banquet where I had the privilege of speaking recently was “Broken to Beautiful: Life is Messy.”

Table centerpieces featured Mason jar tea lights decorated with colorful mosaic pieces. Each jar was placed on a square mirror to further reflect the light inside.

As the center’s executive director addressed the audience, she described how miraculous it is to see God put broken pieces together in the lives of clients, how exciting it is to watch the light of Christ shine through gospel presentations, and how faith-building it is to see messy lives become lovely as we do this great work.

This broken-to-beautiful process is true for the people we serve—and it applies equally to those of us doing the serving.

They say there are two kinds of people in the world—tossers, and keepers.

In our household, I’m the tosser. I’m never happier than when I’ve just cleaned out a closet and taken a load to the thrift store.

My husband, on the other hand, is the keeper. Over the years, he’s put together many collections…butterflies, baseball cards, vinyl albums and so on.

Once, we held a garage sale and Scott sold one of his two nearly identical drills. After the sale, he felt regretful, because one never knows when a second drill could come in handy (whereas I was elated at the extra space in our workshop).

In the practical realm, we “tossers” can build a good argument for getting rid of excess items. However, in the spiritual realm, the nature of a keeper better reflects the character of God.

What a relief to know God doesn’t toss what’s broken!

At one time, every one of us was an enemy of God—yet God values human beings so highly that He created a plan to rescue us before we ever committed treason against Him in the Garden of Eden (Genesis 3).

The beauty of the gospel is best seen in its proper context. Jesus didn’t start valuing human beings when He came to earth and went to the cross for us.

No, He was in on the conversation that took place when we were first created, when God decided, “Let us make man in our image, according to our likeness (Genesis 1:26).”

Jesus has always known what human beings are worth.

The Psalmist David writes, “When I observe your heavens, the work of your fingers, the moon and the stars, which you set in place, what is a human being that you remember him,
a son of man that you look after him? You made him little less than God and crowned him with glory and honor.” –Psalm 8:3-5

We are the crown of creation, created just below God (some versions say “angels”), different than any other creature in the world.

We are also damaged and tainted by sin.

You’ve seen the effects of sin in the lives of your clients—the devastation, the consequences, the wreckage.

Whether it’s an abortion (or several), or drug use, or compulsive lying, or a staggering number of sexual partners, you’ve seen the brokenness.

You’ve heard the stories of how one poor choice led to another, how the victim becomes the abuser, how the curses cycle from generation to generation.

You’ve also seen the power of the gospel—the breakthroughs, the transformation, the ripple effect as a new pattern of wiser choices begins.

You’ve seen God collect the shards of human lives and fashion them into a breathtaking work of art.

Here’s the beautiful thing: in the world of pregnancy help centers, we not only get to witness God doing this in the lives of our clients—we get to testify to what He is doing in our own lives as well.

As you put your hand to this great work, remember who you are.

“For we are his workmanship, created in Christ Jesus for good works, which God prepared ahead of time for us to do.” –Ephesians 2:10

You are God’s image-bearer, the crown of His creation, and His poema  (Greek for “workmanship”). God is the poet, and you are the poem He is writing!

He pre-planned those sessions you have in the client room. He ordained which life skills class your client takes on a particular day, and where that conversation goes.

He ordered the steps of that young mother to come in for an ultrasound so she could connect with her very real baby for the first time as you show her the screen.

You are one player in the grand story of God, and your role is unique. No one else can do what you do, because you are God’s special masterpiece.

Tweet This: You are one player in the grand story of God, your role is unique. No one else can do what you do because you are God’s special masterpiece

(Never mind the Sistine Chapel, the Mona Lisa, or Hamlet. They don’t begin to compare with you!)

That voice belongs to the accuser of the brothers and sisters (Revelation 12:10), whose goal is to discourage you. Why?

Because of what you’re accomplishing with your daily, small acts of faithfulness.

You’re getting in the way of the enemy’s sinister plans to lie, to steal from, kill and destroy human beings. You’re co-laboring with Jesus, offering truth and restoration and abundant life.

So if you feel like a bit of a target these days, take heart. It’s because your ministry is effective, no matter what outcomes you may see at the moment.

God is polishing and perfecting you, His masterpiece—even as He works on other masterpieces through you.