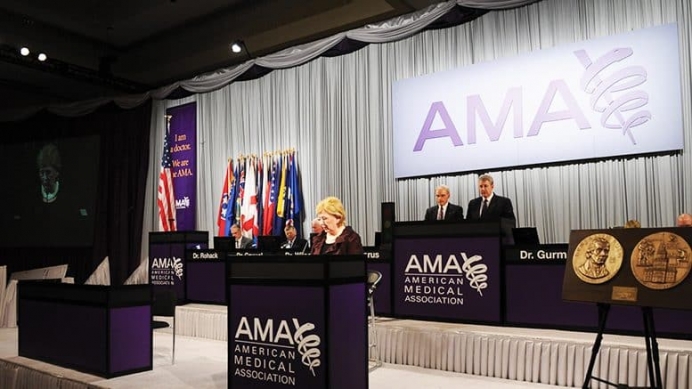 Hobbs at Washington Examiner: American Medical Association Has a Lot to Learn About Pro-Life Centers

Why is the nation’s largest group of physicians and medical students shilling for the lethal, failing abortion industry?

As Hobbs points out, an article in the April edition of the American Medical Association’s Journal of Ethics attacks pro-life pregnancy centers that offer alternatives to an abortion industry that relies on ending lives to stay afloat financially.

The article, “Why Crisis Pregnancy Centers Are Legal but Unethical,” which was written by two so-called “Family Planning” professors from University of North Carolina, repackages long-standing, yet unfounded slander from Planned Parenthood and NARAL Pro-Choice America to slam pregnancy help centers as “fake medical clinics.”

Out of 2,750 pregnancy help centers throughout the U.S., six in 10 offer free limited obstetric ultrasounds under the direction of a qualified physician for a total of just under 250,000 free ultrasound scans each year.

As Hobbs, who also serves as communications director for Heartbeat International, writes:

Without bothering to provide a single instance to back up any of their claims — par for the course in attacks on pregnancy centers — [the authors] Bryant and Swartz go so far as to say that it’s abortion businesses, not pro-life pregnancy help nonprofits, that live up to the ethical guidelines for the four principles stemming from the Hippocratic Oath’s “do no harm” promise.

That would be news to women like Katrina, whose boyfriend shuttled her off to an abortion business near Orlando in early 2017. The minute she walked into the clinic, Katrina knew she was making the mistake of her lifetime. “It was an eerie, chilling feeling once I walked in,” she said. “I just felt completely lifeless.”

Disregarding her misgivings, the abortion clinic staff gave Katrina a dose of mifepristone, the first of two pills in the chemical abortion pill regimen known as RU-486 or euphemistically as “medication abortion.” Katrina, as so many women before her, found out firsthand that abortion clinics care not one iota for notions like “beneficence, nonmalfeasance, respect for autonomy, and justice.” But, amazingly, Katrina got a second chance just 24 hours later at the life-saving pregnancy center right next door.

Today, Katrina is a college graduate and a happy mother who’s also pursuing a career in business — not because of the abortion clinic, but because of the pregnancy center next door to it. Even though her story contains more than just a little bit of the miraculous, her experience does point to larger trends.

While 99 percent of women who visited a pregnancy center gave high marks to the center for its staff, volunteers, information and ongoing help, the photo negative is true of highly profitable abortion mills like Planned Parenthood.

Just last year, over 1.5 million women and men visited a local pregnancy center in the U.S., according to Heartbeat International’s 2018 LifeTrends Report—far more than the 926,190 abortions last reported by the Guttmacher Institute.

Perhaps that’s why abortion advocates are calling upon friends in high places at the AMA to back their failing, lethal agenda.