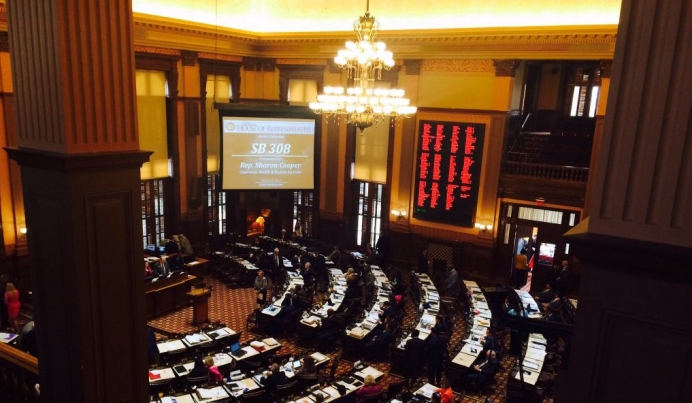 Georgia's House of Representatives approved a bill Friday to would send up to $2 million to pregnancy centers in upcoming fiscal budget Photo Courtesy: Kristina Twitty

A Georgia bill that would channel up to $2 million per year to the state’s pro-life pregnancy help centers cleared a major hurdle Friday, clearing a vote in the state’s House of Representatives.

While a minor change to SB 308 requires it to return to the state Senate for a final approval before hitting the desk of Republican Gov. Nathan Deal, the two remaining steps look to be formalities ahead of the bill taking effect in a new fiscal budget starting July 1.

The 70 pregnancy help centers throughout Georgia—including over 40 offering free medical services such as ultrasound and STI testing—served over 26,000 women in 2014, according to Georgia Life Alliance, a major backer of the bill.

Once signed into the budget, centers in the state could apply to receive an allotment of the $2 million budget item to pay for medical services, any one of an eight-point services list within the legislation. According to the bill’s language, the funds cannot be used for “political or religious purposes.”

“This is a very positive move for the Georgia legislature,” Robin Mauck, executive director at Pregnancy Resource Center (PRC) of Gwinnett in Lawrenceville, Ga., said. “We want to thank Sen. Unterman and Rep. Sharon Cooper for supporting quality medical services and life-affirming resources for women in an unplanned pregnancy.”

After Sen. Unterman saw the bill through the state Senate Feb. 11, the state House Health and Human Services Committee approved the bill this Tuesday. The committee’s chairman, Rep. Cooper, a Republican representing Marietta, then introduced the bill in Friday’s floor session.

Calling Rep. Cooper’s presentation of the bill through Friday’s floor session “masterful,” Georgia Alliance for Life’s director of operations, Kristina Twitty, attributed much of the bill’s success to pregnancy centers in the state, which have made a concerted effort over the past two years to educate lawmakers on their work—often bringing clients to tell how the centers have served them.

Similar efforts to introduce pro-life pregnancy help organizations and the clients they serve to lawmakers take place in many states, as well as at a national level through initiatives like Heartbeat International’s Babies Go to Congress.

“A big part of the educational process was getting the center directors and their former clients in front of lawmakers to tell their story and set their work in context,” Twitty said. “These centers have no financial incentive to serve women and families. This is a huge contrast to abortion clinics that charge for everything they do and have a financial motivation to see that every one of their clients choose abortion.”

Legislation directing funding to pregnancy centers for material support and help has previously been adopted in Indiana, Pennsylvania, Michigan, Texas, Minnesota, Oklahoma and several others. GOP presidential candidate John Kasich and former candidate Jeb Bush have both played a role in funding pregnancy centers through state budgets in Ohio and Florida, respectively.

While the bill’s approval on the House floor is no doubt a positive for pro-lifers and pregnancy help organizations, not all the state’s eligible centers will be applying for the grant.

Daphne Nicely, executive director at Atlanta Pregnancy Resource Center, said she’s encouraging other center directors to consider the potential costs before applying. Pointing out that a religious organization running without government funding can expect more freedom from government intrusion, Nicely said she would be hard-pressed to yield her position as an entirely community-supported center.

“There is the potential that the grant could enable us to rescue more babies and their parents from tragedy of abortion,” Nicely, whose center offers free ultrasound services, said. “Maybe a center would be able to convert to medical or add STI testing. That would be wonderful. But, when you’re receiving government money, there’s strings attached.”

Meanwhile, Donna Perry, executive director for Life Resources of Georgia—a coalition of pregnancy centers in the state—thanked Georgia Life Alliance for its work on the bill, saying she was “glad and grateful for the opportunity to use these additional resources to better serve our clients and patients.”

But, like Nicely, Perry also noted the tension between funding and freedom from government influence the new revenue stream would represent for a religious nonprofit.

“We realize with blessing comes responsibility,” Perry said. “We must be wise stewards of this opportunity as we extend our outreach without compromising our mission.”