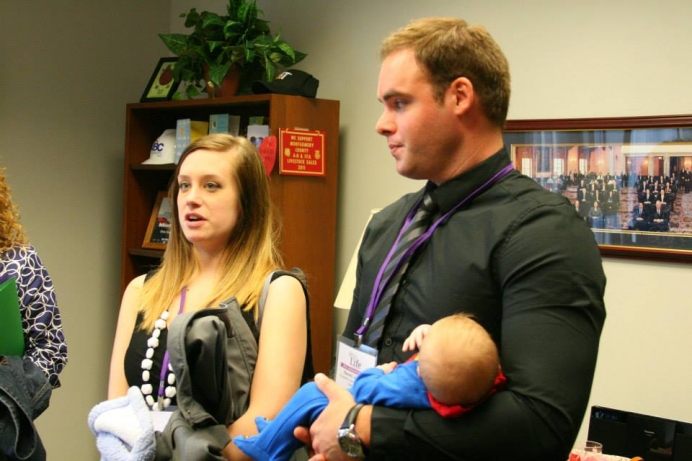 Karlie, Steven and Jackson Jones at the Ohio Right to Life Legislation Day

A year ago, when Karlie Jones found out she was pregnant, it seemed her world was ending. She was unmarried, between relationships, and financially unstable.

But, the baby that wasn’t in her plans was resting in her arms—and the arms of his daddy—when Karlie and her husband, Steven, visited their Ohio state representative Tuesday in downtown Columbus.

The Jones family, 9-month-old Jackson included, traveled from Dayton, Ohio as part of a group from Elizabeth’s New Life Center, one of 10 pregnancy help organizations represented at Ohio Right to Life’s Legislative Day.

Karlie and Steven had a chance to tell their story, of how Elizabeth’s New Life Center, a six-location pregnancy help organization that rescues over 2,000 babies every year, has changed their lives for the better while rescuing their son’s life from abortion.

“[Elizabeth’s New Life] brought Jackson here for us,” Karlie said. “We got to hear his heartbeat because of the work they do, and it changed my opinion from abortion to carrying out the pregnancy. That’s why Jackson is here today. I can’t thank them enough for what they do and what they’ve done for us. They’ve made us a family."

Tweet This: "@ENLC changed my opinion from abortion. They made us a family." @OhioLife

Over 150 staff, volunteers, and clients from the 10 pregnancy centers and statewide chapters of Right to Life participated in the event, which takes place while both the State Senate and House of Representatives consider legislation that would continue funding to pregnancy help organizations as part of the state’s Pregnancy and Parenting Support Program.

The day was also scheduled in conjunction with Ohio's Pain-Capable Unborn Child Protection Act, the national version of which is scheduled to be voted on Wednesday by the U.S. House of Representatives.

“For decades, Ohio’s pregnancy centers have stood as resilient reminders to mothers that they are not alone,” Stephanie Ranade Krider, executive director of Ohio Right to Life, said. “They challenge our communities to lead with more loving, sustainable, and giving practices that help women and their children rather than write them off. We are proud to stand with them and support them this Legislative Day.”

The day continued a “show-and-tell” theme that has been developed at a national level by Columbus-based Heartbeat International with its Babies Go to Congress, which has brought 107 moms and babies to Washington, D.C. to visit over 240 congressional offices since 2009.

Jackson Jones was one of two babies on-site whose families were helped by Elizabeth’s New Life Center, along with 20-month-old Louis.

“To think of how many babies Elizabeth’s New Life has saved is huge,” Steven said. “Just this past year, it was over 2,000 babies. They saved our baby. There’s nothing better than being a father. We’re married now, and it’s a perfect success story of what the center does.”

Tweet This: "@ENLC saved our baby. There's nothing better than being a father."

For Koob, who founded Elizabeth’s New Life Center in 1989, the chance to tell her center’s story, and the sampling of the lives they have touched, was well worth the two-hour drive from Dayton to the state capitol.

Along with the other guests, Koob was also treated to a special address from Heartbeat International President Peggy Hartshorn, Ph.D., followed by a keynote from Ohio Secretary of State Jon Husted.

“It was an awesome day,” Koob said. “I really learned a lot, plus I really appreciated the opportunity to talk to our representatives and some of our senators. It has been great to see the work of Ohio Right to Life from behind the scenes a little bit more.

“We are so blessed in Ohio to have such strong pro-life advocates—not only Ohio Right to Life, but Heartbeat International, all the wonderful pregnancy centers, and the pro-life commitment of our representatives and senators. To me, it’s been a great day.”

To see a photo album from the day's event, click here.