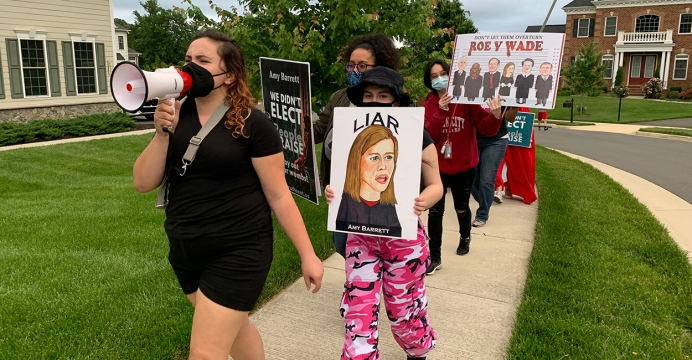 A document obtained by The Daily Signal indicates the FBI had investigative interest in, but apparently didn't act on, pro-abortion protests last summer outside the homes of Supreme Court justices. Virginia Allen/The Daily Signal

FBI had investigative interest in protests at justices’ homes, but apparently took no action, document reveals

(The Daily Signal) The FBI indicated its investigative interest in pro-abortion protests last summer outside the homes of Supreme Court justices, although the bureau apparently didn’t act, according to a document obtained by The Daily Signal.

After someone leaked the court’s draft majority opinion in Dobbs v. Jackson Women’s Health Organization on May 2,  protesters demonstrated for months outside the Virginia residences of Justices Amy Coney Barrett, Samuel Alito, and Clarence Thomas, and the Maryland homes of Chief Justice John Roberts and Justice Brett Kavanaugh.

Just days after the leak of the draft opinion that ultimately would overturn Roe v. Wade and abortion on demand, the FBI issued a report to multiple FBI field offices, Virginia State Police, and possibly other police departments, highlighting news articles of interest.

Several of the articles were about pro-abortion activists holding protests outside the homes of the Supreme Court’s six conservative justices.

After each news article listed in the FBI’s May 12 report, acronyms indicate which FBI offices have jurisdiction and an investigative interest in each event.

The report links to a Daily Mail story with the extended headline, “The left-wing firebrands backing protests at SCOTUS judges’ houses.”

After the article, the FBI notes: “WFO, BA and Multiple Field Offices.”

The article in the Daily Mail mentions the pro-abortion group Ruth Sent Us, which organized and led protests outside the homes of Supreme Court justices last year.

Another article from The Hill on Virginia Gov. Glenn Youngkin’s call for greater security at the homes of the justices is noted to be of interest to the FBI’s Washington Field Office. That article also mentions Ruth Sent Us.

The email text above the FBI report obtained by The Daily Signal was fully redacted, as was the text in other emails that Virginia State Police sent to The Daily Signal in response to a request for emails between the police agency and the federal government related to protests outside justices’ homes.

“What that FOIA revealed is that there is an FBI investigative interest in these stories. Why else would the FBI highlight them as being relevant to the Washington Field Office, the Baltimore Field Office, and multiple other field offices?” Roman Jankowski, senior investigative counsel on The Heritage Foundation’s Oversight Project told The Daily Signal. (The Daily Signal is Heritage’s multimedia news organization.)

“Unfortunately, regardless of the theoretical investigative interest in [the] political violence of such groups as Ruth Sent Us or Jane’s Revenge, the FBI has demonstrated no interest in pursuing any investigate activity that targets any persons who are proponents for abortions,” Jankowski said. 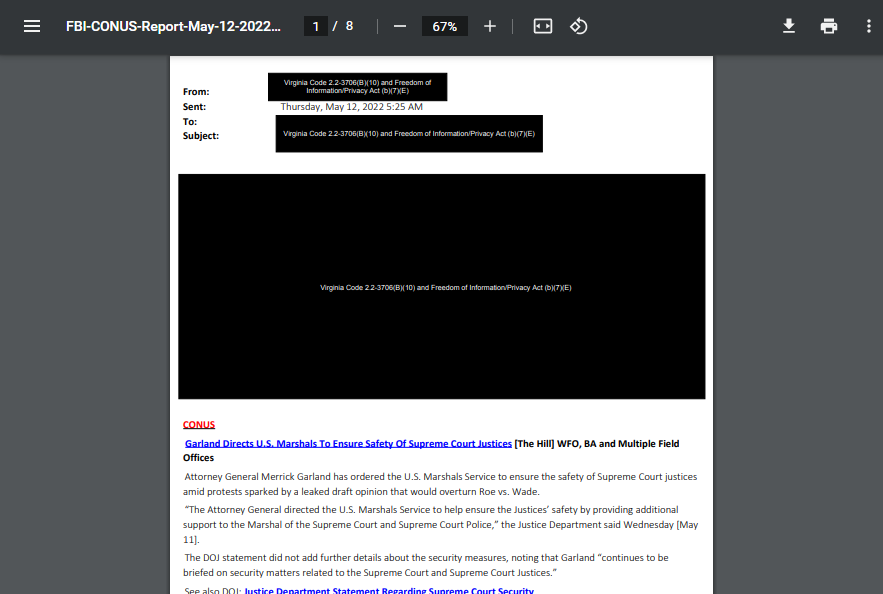 Click the image or HERE for the FBI document obtained by The Daily Signal.

When The Daily Signal contacted the FBI for comment, the bureau responded: “The FBI has no comment.”

Protesting outside the home of a judge or justice in an attempt to influence a ruling is a violation of federal law.

Although the FBI appears to have indicated an investigative interest in the activities of pro-abortion activists, it doesn’t appear to have taken action against such protesters.

The relevant federal law, 18 U.S.C. §1507, states: “Whoever, with the intent of interfering with, obstructing, or impeding the administration of justice, or with the intent of influencing any judge … in the discharge of his duty, pickets or parades … in or near a building or residence occupied or used by such judge … shall be fined under this title or imprisoned not more than one year or both.”

Cully Stimson, deputy director of the Edwin Meese III Center for Legal and Judicial Studies at The Heritage Foundation, told The Daily Signal that it is “past time for this Justice Department to arrest and prosecute the protesters who have clearly and brazenly violated 18 USC 1507 by picketing and parading in front of Supreme Court justices’ homes for weeks on end.”

“By not enforcing the law, the attorney general [Merrick Garland] is giving a green light to these protesters and others that it is OK to interfere and obstruct the administration of justice and harass Supreme Court justices and their families at their homes,” Stimson said, adding that “Garland should be ashamed of himself.”

The Daily Signal sought comment from the Justice Department  but did not receive a response.

As recently as last fall, a small group of pro-abortion activists still were holding protests outside Barrett’s home in Fairfax County, Virginia, just outside Washington.

“Fairfax County Commonwealth’s Attorney Steve Descano, a Soros rogue prosecutor, has also decided not to enforce state law, namely, § 18.2-419 of the Virginia Code, which makes it a criminal offense to engage in protests ‘before or about the residence or dwelling place of any individual … which disrupts or threatens to disrupt any individual’s right to tranquility in his home,’” Stimson said.

Stimson said Garland and Descano both had “failed to enforce the criminal law prohibiting this despicable and dangerous behavior, purely for political reasons.”

The Daily Signal asked Descano for comment, but didn’t receive a response.

What is the FBI doing?

In September, the FBI arrested pro-life activist Mark Houck at his Pennsylvania home on charges of assaulting a pro-choice volunteer outside a Planned Parenthood abortion clinic in Philadelphia in 2021. Houck later was released.

Houck’s attorneys have asked the U.S. District Court for the Eastern District of Pennsylvania to dismiss the charges against him.

In October, the FBI arrested Tennessee resident Paul Vaughn at his home on a charge of violating the Freedom of Access to Clinic Entrances Act. The Justice Department announced in October that it had charged 11 pro-life activists with violating the same law by blocking the entrance of an abortion clinic in 2021.

Tweet This: “The FBI has no comment” about a document showing it had investigative interest in pro-abortion protests at Supreme Court justices' homes

Republicans on the House Judiciary Committee released a report in November accusing the FBI of abusing its authority to further the Biden administration’s political agenda. The report details the claims of multiple whistleblowers at the FBI who shared what is happening at the agency behind closed doors.

The Republicans’ report claims the FBI is “artificially inflating statistics about domestic violent extremism” by pressuring agents to report irrelevant incidents as violent extremism and by categorizing investigations related to the Capitol riot as separate cases, not related to a single incident.

Republican staff argue that the FBI is abusing its counterterrorism authority to investigate parents who spoke out at school board meetings against specific policies.

According to the report, whistleblowers explained that, after the National School Boards Association urged President Joe Biden to investigate concerned parents, the FBI opened investigations into one mother who told a school board “we are coming for you” and a father because he “rails against the government” and “has a lot of guns.”

The report blames the FBI for protecting the president’s son, Hunter Biden, despite multiple reports about his lucrative foreign business dealings while his father was vice president. The report cites Meta CEO Mark Zuckerberg, who admitted that Facebook took “meaningful” steps to censor articles about the contents of Hunter Biden’s laptop in the weeks before the 2020 presidential election, following an FBI warning.

This example highlights FBI collaboration with Facebook and other social media platforms, which the House Republicans’ report describes as the bureau’s “helping Big Tech to censor Americans’ political speech.”

The report also faults the FBI for using its authority under the Foreign Intelligence Surveillance Act to spy on American citizens, including those associated with Donald Trump’s 2016 campaign.

Whistleblowers also claimed that the FBI is culling staff who “dissent from its woke, leftist agenda,” according to the report. The bureau is seeking to “purge” FBI employees holding conservative views, the whistleblowers said.

The FBI took retaliatory action against at least one whistleblower who spoke out, according to the report.

FBI and Justice Department leaders should be questioned regarding their arrests of pro-life activists, “as well as their lack of action against real threats,” Stimson and Hans von Spakovsky, Heritage Foundation senior legal fellow, recently wrote for The Daily Signal.

Editor's note: Tyler O’Neil and Mary Margaret Olohan contributed to this report. This article was originally published by The Daily Signal, the Heritage Foundation's news platform.