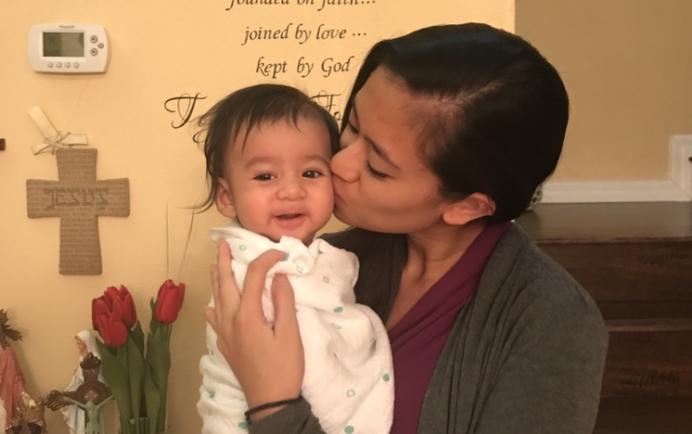 Katrina and her son, Gabriel, who she rescued through Abortion Pill Reversal in early 2017.

Once a woman has started down the road of a chemical abortion, it’s too late for her to change her mind, right? Wrong, says a study published Wednesday in the medical journal, Issues in Law and Medicine.

Conducted by George Delgado, a doctor and key pioneer behind the Abortion Pill Reversal medical intervention, the study followed 754 women who all wanted to stop their in-process chemical abortion—also known as RU-486 or euphemistically as a “medication abortion” or the “abortion pill.”

Delgado’s research is great news for pro-life advocates and the women they seek to serve with life-affirming empowerment. Up to 68 percent of women who changed their mind about an abortion and started the Abortion Pill Reversal treatment were able to give birth to a perfectly healthy baby.

“Women who change their minds after starting a medical abortion now have a second chance at choice,” Delgado, a physician and clinical professor at UC San Diego, said.

A new application of an FDA-approved progesterone treatment used since the 1950s to stop miscarriages, Delgado and another physician—Matthew Harrison in North Carolina—have both played major roles in developing the protocol, physician network and national hotline (877-558-0333) that have helped over 400 women save their babies from abortion since 2007.

The new study is the first publically available documentation since 2012, when Delgado and his colleague Mary Davenport published an article following seven women’s progress in Annals of Pharmacotherapy.

With that limited sample size, Delgado and Davenport showed a 66 percent success rate when the protocol was applied within 72 hours of a woman taking mifepristone—the first of two pills in the abortion pill regimen.

In the latest peer-reviewed research, Delgado, Davenport and five more scholars noted 261 babies rescued, including a 68 percent rescue rate when a woman takes doctor-prescribed progesterone within 72 hours of taking the first abortion pill.

While the study comes as welcome news to pro-life advocates, its impact will be nothing short of life-saving for future mothers who change their minds after resorting to abortion.

That was the case for a Florida college student named Katrina, whose boyfriend threatened to kill himself if she didn’t abort their child in early 2017. Although she took the first abortion pill, 24 hours later, she was receiving an emergency dose of progesterone to stop her abortion and save her child’s life.

Today, her baby boy, Gabriel, is approaching his first birthday. He’s one of well over 400 children whose mothers have chosen to rescue their babies through Abortion Pill Reversal—which has, nonetheless, been attacked as suspect by abortion activists.

Speaking with The Washington Post on Wednesday, UC San Francisco professor Daniel Grossman admitted the medicine and logic underlying Abortion Pill Reversal “makes some biological sense,” but renewed his call for a clinical trial that would give some women looking to stop their abortions a placebo instead, despite the obvious ethical implications of such a move.

The most vocal critic of Abortion Pill Reversal, Grossman’s concession that the protocol is very likely saving lives echoes that of Yale School of Medicine’s Harvey Kliman, a pro-choice professor who nonetheless told a New York Times reporter he would prescribe the treatment to his own daughter in an interview last summer.

Leveraging opposition to the treatment from subtly pro-abortion groups such as the American College of Obstetricians and Gynecologists (ACOG), an abortion activist working for Rewire News has pressured regulators in California into harassing groups that train nurses and others on Abortion Pill Reversal.

While the effort to stop nurses from learning about Abortion Pill Reversal has faltered thus far, opposition to the life-saving intervention is still alive and well, and so is the fight from pro-life groups to make nurses aware of the treatment.

A petition launched last month from Heartbeat International, urging California’s Board of Registered Nursing to resist pressure from abortion supremacists has gained 3,000 signatures—over 2,000 of which were delivered to the Board late last month.

As a new chapter in the fight for life begins, pro-life advocates will have far more information at their disposal thanks to Delgado and Davenport’s new report.