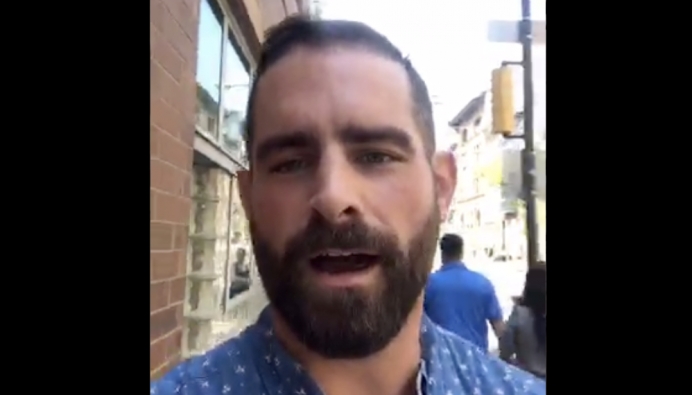 When Pennsylvania State Representative Brian Sims (D) posted a livestream of him berating a woman praying outside of an abortion center in Philadelphia, he exposed, for all to see, what those who defend abortion truly believe.

“Shame on you!” he told a quiet, unassuming woman...over and over in a vicious verbal onslaught in an attempt to raise money for Planned Parenthood. He called her a coward, questioned her faith and morality, even attempted to obtain her home address so he could harass her at home. It was harassment of the worst kind, by an elected official.

Sims’ bullying tactics caught the attention of The Daily Wire’s Matt Walsh, who plans to bring hundreds to that same Planned Parenthood location on Friday. Abby Johnson, Lila Rose and many others signed on quickly, ramping up what promises to be an interesting 11 A.M. conversation on Locust Street in the City of Brotherly Love.

This, on the heels of State Rep. John Rogers (D-AL), who recently stood in the Alabama house chamber bellowing, “Kill them now or kill them later” as he defended abortion as a means to lower the number of “unwanted” children.

This is going to sound odd, perhaps even heretical to some, but here goes: This is good news.

Why? Because the abortion lobby is so afraid, its last gasp is to show their true colors.

Five years ago, could any of us imagine a state government in New York legalizing infanticide? A governor on a Virginia radio show advocating for the same thing? And now, a state representative (a man by the way) shaming a woman for praying? Another, placing his eugenics views in the public record on a legislative floor?

So what’s changed? Why now? Why are abortion proponents so public these days?

There are plenty of reasons, but let me name a few:

This movie is making a lot of people uncomfortable. The truth usually does. Its impact is beyond anything we could have believed. Unplanned is waking up the Christian community and scaring the daylights out of those who profit off abortion.

Not only this, with dozens of abortion workers leaving the industry, its employee base is shrinking. And, there’s not a line waiting to take their places.

No one knows how Justice Kavanaugh (or Chief Justice Roberts) would rule if a challenge to Roe makes it to the Supreme Court. But a lot of groups stand to lose billions of dollars if once again, states get to decide their own laws on this issue.

One thing I know is that on many issues, follow the money. Planned Parenthood, a “non-profit,” is a cash cow which subsidizes hundreds of political campaigns. Many in Washington owe their offices to Planned Parenthood. They are worried. And should be.

For a long time, we operated under the radar. We were little threat to Planned Parenthood or any other abortion group. We did good things, to be sure. But often, we were “the best kept secret” in our own communities.

Did we impact lives? Yes. Did we save lives? Yes, we did.

But with the web, Google, social media and more, the playing field to reach clients leveled. We now compete head-to-head with the abortion industry in major markets. And with a level playing field, we’re winning. Plenty.

The other night I was at a pregnancy center event in a small town, more than an hour from the nearest abortion clinic. But some easy math showed us that in the last 30 days, this small-town center, by reaching abortion-minded women first, saved several women and children from abortion and in the process, stripped Planned Parenthood of $3,000 in sales.

This, in a town most have never heard of. Three-grand is enough to pay a Planned Parenthood employee for a month. Gone. Follow the money. You’ll find the reason for their fear.

Few reading this column can hop on a plane and make it to Matt Walsh’s Philadelphia event. That’s okay, because if you are in the pregnancy help community, we have a job to do, too. Each of us has a role to play, and as we do, we support each other.

Our role? Reach out with powerful, life-changing love to those who come in the door of our pregnancy help organizations. It’s what we do.

Love, real love, has two results. One result is that it changes lives as those who desperately need love respond and find hope and faith once again.

Another result? Real love—as Jesus found out—is polarizing. Love challenges power bases, and those who thrive off power and money lash out.

We’re seeing those in power lash out in Philadelphia, Virginia, New York, Alabama and across the country. It’s a good sign. We—all of us—from those who gave us Unplanned, to those on Capitol Hill and in legislatures across the country, to our friends headed to Philadelphia...to all of us in the pregnancy help community—are turning this crazy world upside down. Through love.

Those in power are fearful. And angry. It’s a topsy-turvy time.

This is what love does. And even though things look crazy right now, we might just see this world turn upright again—sooner than we think.

Tweet This: We’re seeing those in power lash out in Philly, VA, NY, AL and across the country. Here's why it’s a good sign for the #prolife movement.