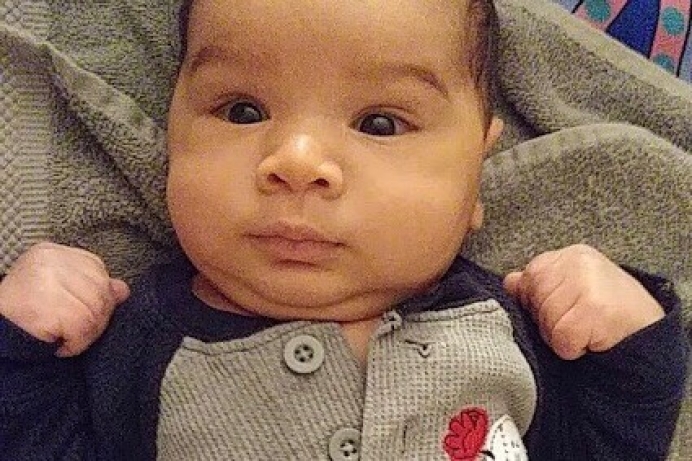 Isaiah was rescued by his mother Sarah, who changed her mind after beginning a chemical abortion one year ago. Today, he is 3 months old, and Sarah has never been more grounded in her faith. Photo Courtesy: Abortion Pill Rescue/Heartbeat International

Abortion Pill Reversal Is Real. Baby Isaiah Is Alive Today Because of It.

Sarah was a single mother of three children when she took a test and found out she was pregnant with her fourth at the age of 26.

“I was always raised pro-life in a Catholic family but was really struggling with realizing I was pregnant with my fourth child, and was worried about how my family and everyone I came across in life would view me,” she said.

When she told the baby’s father that she was pregnant and asked his thoughts, he was determined that she have an abortion. Although Sarah had reservations, she found herself surrendering them to the pressure of the moment.

“I was not content with the decision for an abortion, but to save face, I made the appointment at Planned Parenthood and I went,” she said.

At five weeks, a heartbeat was detected, but all Sarah could hear was the father’s urge to "take care of this."

After taking the first drug in the chemical abortion regimen, Sarah returned home and cried.

“I couldn't look at my other three children in the face without breaking down and telling myself this baby deserves love just as much as these three in front of me,” she said.

With that thought in mind, Sarah began searching the internet for ways to undo the effects of the pill she’d taken earlier that day.

The next morning, she called a number she’d found for Abortion Pill Rescue (877-558-0333) and learned there was a doctor nearby who could help. Once at the doctor’s, the baby’s very faint heartbeat was detected and Sarah was able to begin the Abortion Pill Reversal treatment.

“I prayed for God to help me through,” she said. “I wanted to try whatever I could to reverse the worst decision I had made.”

By the next week, her baby had a strong heartbeat and her doctor was confident to continue treating the duo for the rest of the pregnancy. Now, one year later, Sarah’s son Isaiah is three months old and healthy as can be.

“I have never been more grounded in my faith, nor blessed,” Sarah said.

Isaiah’s father cut all ties with Sarah when she told him "the abortion didn't work," but she has taken that outcome in strides, certain that her decision was the right one.

“It is a struggle at times, but nothing near the struggle I would have endured for the rest of my life if I had not found this number and called,” she said.

Sarah is one of hundreds of mothers who have successfully reversed their in-progress chemical abortions, bravely taking back their choice and rescuing their children from death.

For women who regret beginning a chemical abortion, Abortion Pill Reversal offers a last chance to save a life. Developed by physicians George Delgado and Matthew Harrison in 2007, the treatment works by giving women extra progesterone up to 72 hours after a woman takes the first chemical abortion pill. Last year, Delgado released a study showing that 64-68 percent of women who used the protocol were able to give birth to a baby with no greater risk of birth defects than the general population.

Managed by Heartbeat International, the Abortion Pill Reversal protocol is backed by a 24/7 helpline (877-558-0333) and a robust provider network of more than 500 clinicians, known collectively as Abortion Pill Rescue.

Since its inception, Abortion Pill Reversal has led to the births of more than 500 babies with another 150 on the way.

All the Proof We Need

Despite the stunning results, abortion advocates have been quick to dismiss the protocol as “junk science.”

As of this month, California abortionist Mitchell Creinin has given rise to another surge of naysayers, with an unethical, new study which hopes to disprove the reversal protocol by having women endure an abortion twice.

Over the last week, both VICE News and Jezebel have produced polemics against Abortion Pill Reversal, practically rooting for its failure in this new study.

The VICE headline intones, “There’s no proof ‘abortion reversals’ are real. This study could end the debate.”

Of course, “abortion reversal,” broadly stated, does sound like quite the myth. Indeed, not all abortions can be reversed, a tragic reality that pro-life ministries have spent decades trying to communicate to women and men on the verge of an abortion decision. A dilation and evacuation abortion cannot be reversed, nor can a suction curettage abortion, both surgical procedures which mutilate the child in question.

Yet over the course of the last decade, the realization that a chemical abortion can be reversed has proven to be life-saving.

In her article, Shah claims, “[Abortion Pill Reversal] is only a theory that has been introduced by anti-abortion activists and politicians to further attack access.”

Sarah, from the story above, accessed abortion quite easily, thanks to the not-so-subtle pressure of her child’s father. And who helped her when she realized the frightening mistake she had made? Not Planned Parenthood.

Shah says that abortionists would support a client in continuing a pregnancy if she changed her mind, but Planned Parenthood played no role in supporting Sarah in that decision. Similarly, just a couple of months ago, a Tennessee Planned Parenthood sent a pregnant woman on her way when a chemical abortion failed to extinguish the lives of her twins.

Only by calling the Abortion Pill Rescue helpline was the woman able to find a pro-life doctor who is now continuing to provide her and her twins with prenatal care.

Shah and Creinin contend that a patient changing her mind about an abortion is rare, yet it does happen.

“A national survey in 2008 showed that 92 percent of women had made up their mind before making the appointment,” Shah writes.

In 2014, somewhere between 300,000 and 400,000 chemical abortions in the U.S. were reported to the pro-abortion Guttmacher Institute. If the survey data from 2008 holds true today, there are still tens of thousands of women just like Sarah who may not be so sure about their abortion and could benefit from knowing about Abortion Pill Reversal.

That’s why, to Shah’s and Creinin’s dismay, pro-life policymakers are introducing and enacting measures (what Creinin calls "stupid laws") that require women to be given information on the reversal treatment ahead of having an abortion.

While Abortion Pill Reversal might be an inconvenient reality for the abortion industry, it is changing the course of the future for hundreds of families like Sarah’s. As more information continues to come to light on the life-saving effects of the protocol, Sarah and little Isaiah are giving us all the proof we need that Abortion Pill Reversal works and is very real indeed.

Tweet This: Abortion Pill Reversal is real. Baby Isaiah is alive today because of it. #APRSavesLives