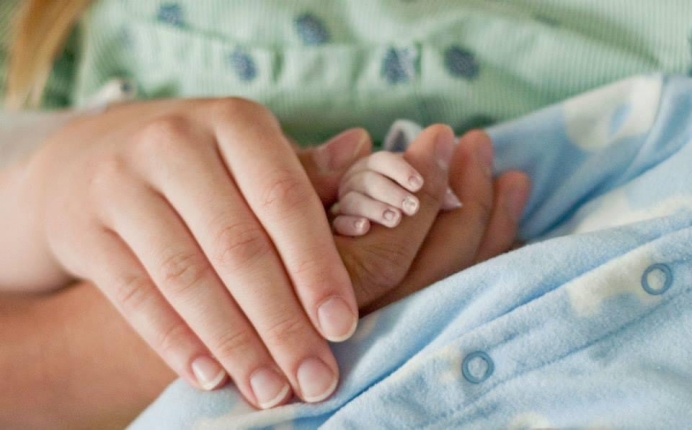 Editor's note: Lindsey's son Aiden was born June 4, 2013, and died that same day. Aiden had anencephaly, a birth defect which results in a baby being born without portions of their brain and skull. Almost all babies born with anencephaly will die shortly after birth. Lindsey and her husband were advised to have an abortion, but they declined, recognizing that their son's life had meaning and that he was part of God's plan. Lindsey shared her inspiring story of faithful trust in God recently on The ProLife Momma Facebook page and it is reprinted here with permission (Photos are courtesy of Lindsey and rights are reserved).

"I know there was a purpose for him to come into our life. Because of Aiden's story, there have been women who have thought about abortion and I was able to share my story, with Gods help and was able to change their minds. That alone tells me God is never wrong and things happen for a reason and my pain is helping others."

Abortion is not the answer. The doctors wanted me to abort my son and try again later. They said he had no reason for life. If he lived past birth it would only be for a few minutes, a few hours at the most. The doctors said other parents who have a baby with this anencephaly health condition, just go ahead and terminate the baby to save themselves heartache and pain in the future.

Even after I said no, they still tried to get me to abort my son, giving me up to 20 weeks to abort.

They said, "There is no hope, I'm sorry." But I knew if I aborted my son I would always live in that sadness of "what if" my son lived, "what if" I had a miracle.

And I would live in guilt that I killed a baby who had a strong heartbeat that God gave him.

In Jeremiah it says, "For I know the plans I have for you declares the Lord, plans to prosper you not harm you, plans to give you hope and a future." So I continued my pregnancy. Because this was my plan that God gave me. I don't fully understand why God has things happen the way they do sometimes. But I know He is never wrong. So who am I to question God and change the plan? It also says in Jeremiah, "Before I formed you in the womb I knew you, before you were born I set you apart; I appointed you as a prophet to the nations."

My son died in my arms 20 minutes after he was born.

But those 20 minutes was all he needed to do the job God sent him to do. My son brought me and my husband closer and most importantly closer with God. He gave me hope and  faith with God during my pregnancy.

I know I didn't get a long time with my son. But I got 20 minutes. And that's better than none. I will cherish those 20 minutes forever.

I got to kiss him, hold him, tell him I love him and that he's going to heaven, and I will be there soon.

My son's goal in life was to come into this world to give people hope and faith and turn their lives to God. And he accomplished it. I know my son made God proud. I know he made me proud.

If I would have aborted my son I wouldn't have these beautiful pictures of him or the memories I had with him during my pregnancy and when he was born. So with that said, my doctors were WRONG! My son did have a reason for life. He gave me faith, along with many others. And he did deserve to be born. Yes it is a heartache at times but not the heartache I would have went though - forever questioning myself & the “what if’s.”

Tweet This: "My doctors were WRONG! My son did have a reason for life. He gave me faith, along with many others. And he did deserve to be born."