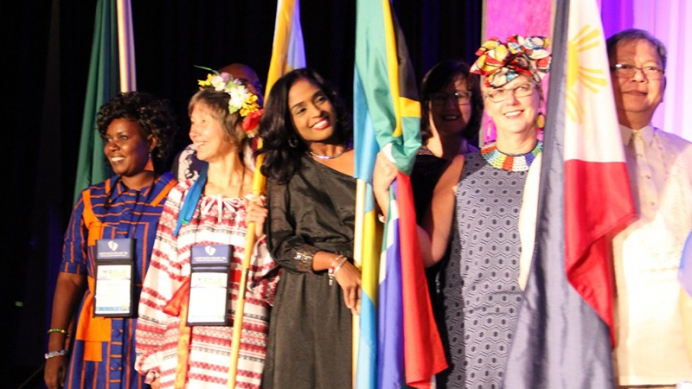 At Heartbeat International’s Conference last week, we saw and heard the theme, “World Changers,” on banners, during general sessions and at other times throughout the week.

Most conferences have themes, serving the purpose of focusing attendees and building enthusiasm.

But this was different. By the time my wife Jenn and I left Anaheim on Friday, “World Changers” was an integral component in all our conversations.

We realized, perhaps more clearly than ever, that the pregnancy help community is—really—a group of world changers. World changing is what takes place in pregnancy help centers, clinics and maternity homes in the U.S., Canada and around the world. It’s in our DNA.

Tweet This: World changing is what takes place in pregnancy help centers around the world. It’s in our DNA. #prolife @KirkWalden

Not one woman—or man—walks in our door without the opportunity to see incredible change in their lives. Whoever greets a woman, or couple, is the first to introduce the possibility of change. Then, the baton is passed to a client advocate, and perhaps on to a nurse or someone else.

Throughout our centers, clinics and maternity homes, questions are asked. Hope is introduced. Opportunities for change take place.

For some, the opportunity might be a negative pregnancy test where our patient can rethink a relationship. For others, the opportunity for change is in the ultrasound room, or perhaps as adoption is considered seriously for the first time.

While I’m not naïve enough to say change takes place with every person who comes in our door, many—some we may never connect with again—seize the opportunity. When she does, or he does—the world changes.

The thing about world changers which fascinates me is that true World Changers don’t wake up one morning and say, “Aha. Here is the blueprint for changing the world. I’ll do this first, that next and work on steps three, four and five after that.”

Nope. World Changers are those who answer the next call from the Lord and say, “Yes.” The call may be seemingly small or insignificant, but they do it anyway.

On opening night, I had the chance to catch up with Rev. Andy Merritt before he opened our conference in prayer. I kidded him as a fellow “Southern boy,” telling him what I like most about him is that he doesn’t see himself as special (other than in the Lord’s eyes—as we all are), but as a simple “nobody from nowhere” who listened when the Lord called.

And it’s true. Andy has served as pastor at Edgewood Baptist Church in Columbus, Georgia since 1977. For those counting, that’s 41 years. While there, he and his fellowship opened the first church-sponsored pregnancy care center. Today, Andy and his team can point to more than 500 of our centers they either started, supported or assisted. Five hundred.

But Andy is as genuine as they come, taking one step at a time—saying “yes” when called. That’s world-changing.

He’s never lost his sense of priorities, either. After praying for all of us, Andy quietly told me he had to go. His wife was with him and they were making Tuesday a date night. He didn’t know where they would eat, but he knew one thing; he was going with her. And that’s all that mattered.

Like I said, priorities. World Changers know what is important.

As I looked around the room during general sessions, I thought, Do we truly grasp how many World Changers are together right now?

Here’s a question. How many of us walk into the office and firmly understand; human history could be forever changed by a decision made in the hours ahead? Do we get that?

I don’t think we do. If we did, it might overwhelm us.

This last week, Jenn and I walked out of the Hyatt Regency tired (it was a busy week) but energized like few times in our lives. And once again, we realized there’s no other group we’d rather hang with than the pregnancy help community.

After all, we were in the presence of World Changers.