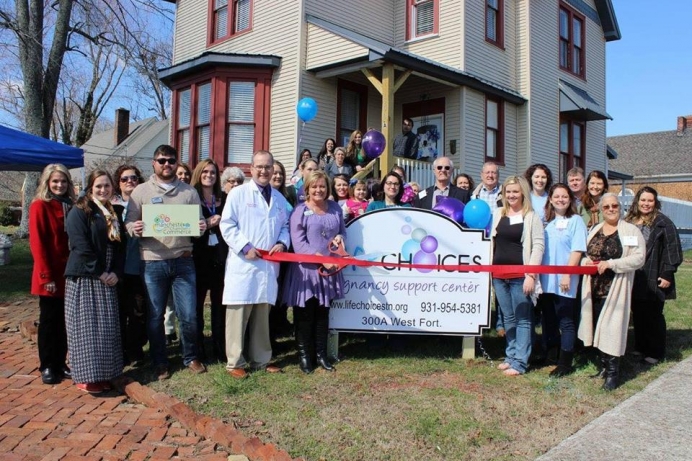 Woman with a Mission Brings Pregnancy Help to Tennessee Hometown

Donna Malone already knew the high price women pay when denied the truth about pregnancy and abortion. But when her 8th-grade daughter came home from school with tales about her classmates’ flippant attitudes toward sex, Malone became a woman with a mission.

She resolved to bring women in her hometown of Manchester, Tenn., the same help she gave women as a volunteer at Portico, a pregnancy center in Murfreesboro, 30 minutes away.

As a real estate agent, Malone did what came naturally: she scanned listings for a potential site for her ideal center. During a showing of one of those sites, Malone paused to pray.

“I heard God tell me, ‘You need to stop, you need to wait; I will bring someone with the same heart as you have,’” she said.

But there was more, as she tells it.

Malone called off the property hunt and phoned Jodi Gardner, a former Portico staffer who had moved to Winchester, another 30 minutes south of Manchester, where she had started Life Choices Pregnancy Support Center.

It turned out Gardner was preparing to step down as executive director at Life Choices. When Gardner invited Malone to apply for the job, she balked at the prospect of taking the leap from volunteer to director. But by July 3, 2015, that was exactly what happened.

While she settled into the role in Winchester, Malone continued to wrestle her lingering desire to serve women in her hometown of Manchester.

“I said, ‘God, you got two of the letters wrong: I said Manchester, not Winchester,'” Malone said. “And He said, ‘No you're right where you're supposed to be.’”

Still, Malone was convinced there was more work for a pregnancy help organization to do in Manchester. She knew from personal experience.

The Difference an Ultrasound Makes

Over 30 years ago, when she was unexpectedly expectant, Malone had ended her child’s life through abortion.

It wasn’t until years later the truth sank in, as Malone accompanied her grown daughter for an ultrasound and saw her grandson’s heartbeat at six weeks. In that moment, she understood what abortion really was—and what she never had the chance to discover prior to her abortion.

“I believed the lies: It's not a viable life, there's no heartbeat, there's no baby, and it's just another form of birth control,” Malone said.

Malone went on to find healing and the freedom to move forward in helping other pregnant women through a Surrendering the Secret program. And that brought her, ultimately, to Life Choices—in Winchester.

The realization that she had stopped a beating heart drove Malone to tears of regret and repentance. It also gave her a strong resolve to tell her story (here) and spread the truth about fetal development.

“How did I not get all this?” she said. “I have a degree in child development and family studies. It's a topic they don't touch on a lot in colleges. They don't tell you the truth really. They tell you about child development after birth, not before. [The ultrasound] was definitely an awakening.”

The Same Heart and a House

In Winchester, Malone’s skepticism ran up against God’s provision when a couple who were Life Choices’ donors came to her with a proposition: “We've got this house we want to buy, but only if Life Choices can use it."

The house was a Victorian two-story house right off the town square—in Manchester.

“I forgot about that prayer for a house in Manchester until I walked in and said, ‘OK, it's a house. I guess this is where we're supposed to be,’" Malone said, pointing out that she also discovered the house’s seller was a long-time member of her church. “God’s been preparing this house for us for the last nine years!”

Even before Malone’s board had approved the project, the anonymous donors bought the house in October 2016 and handed her the keys.

The woman said she had prayed, “Lord, why did you give me this idea if this wasn't meant to be?" The divine answer back was simple: “This wasn't your idea.”

“Their vision is for us to run the center and not to pay any rent,” Malone said. “That's their long-term plan for it. It's just somebody with the same heart for this ministry that I have. That's all it can be.”

For now, the owners are charging only $500 a month for rent. In September, when renters living in part of the lower level relocate, Life Choices will pick up utilities costs and move its ultrasound and the remaining client services downstairs.

Life Choices cut the ribbon on its Manchester center in February 2017 amid a standing-room-only crowd. Among the donations the community showered upon the center were not one, but two medical exam tables for its ultrasound services.

The retiring doctor who gave the tables said, “The second one is for the next center.”

Where Will the Next Center Be?

With the help of two site directors—Nancy Simpson in Manchester and Gail Prince in Winchester— Malone and her team have dreams of bringing women truth and practical help in currently underserved areas of the state.

“So we've got our eyes on some places, and we’re just really growing as we can, looking for where God wants us to go and just waiting on Him,” Malone said.

Meanwhile, Malone and her fellow leaders are busy reaching out to their communities through events like One Day of Hope, bringing together dentists, doctors, and other providers to offer free care to underprivileged families and individuals. Life Choices also participates in a public, community-wide baby shower, where expecting mothers can meet pregnancy-focused vendors and nonprofits.

Eventually, Life Choices is planning to offer on-site ultrasounds at public events like these, while making inroads to public schools with sexual integrity curriculum.

“We've made a difference since we've been here,” Malone said. “We just received a call from a Coffee County school to bring our program to one of the Manchester city middle schools there. I think we'll probably get into more of the Coffee County schools as well.”