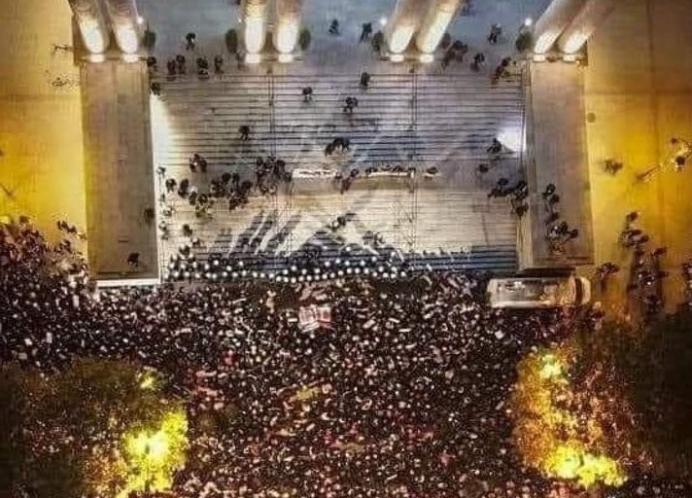 A pro-abortion crowd surrounds St Alexander’s Church, where a police line separates the crowd from Polish Catholic’s manning the doors of the church. Visegrad 24 Twitter

Who are the real ideologues in Poland?

(Mercatornet) Tens of thousands of Polish women defying lockdown rules in the streets. Cathedrals invaded by chanting crowds. Handmaids walking down church aisles. Banners with slogans like: “You Have Blood on Your Hands” and “You are Building Women’s Hell.”

Ever since Poland’s highest court ruled last Thursday that abortion due to foetal defects is unconstitutional, the country has been in turmoil. Now abortion will only be legal in cases of incest, rape, and life-threatening danger to the mother.

The 11-2 decision was immediately criticised by the commissioner for human rights for the Council of Europe, Dunja Mijatović, who decried it as “a sad day for women’s rights”.

Former liberal Polish premier Donald Tusk called it “political wickedness”. “Throwing the topic of abortion and a ruling by a pseudo-court into the middle of a raging pandemic is more than cynical,” said Tusk.

Poland already had one of the most restrictive laws in Europe. In 2019, according to figures from the health ministry, only about 1,100 abortions were performed in a population of 38 million. Of these, 1,074 were authorised because the foetus was believed to have an abnormality. Of these, 435 had Down syndrome. Only about 2 percent of abortions were to save the life of the mother.

The protesters – and their supporters in the Western media – have framed the issue as one of oppressing women. They claim that many Polish women – possibly as many as 100,000 – go to other countries for abortions. They are being stripped of their right.

Right to what? Let’s look at it from a different angle. They want the right to eliminate Down syndrome children. It would be much more honest if their placards read: “disabled children have no right to live” or “re****s must die”.

Tweet This: Right to what? Let’s look @it from a different angle. Protesters of Poland's abortion ban want the right to eliminate Down syndrome children

But that wouldn’t sound so good, would it?

The foreign media claims that most Poles support abortion. That’s hard to know. But the President of Poland, Andrzej Duda, welcomed the ruling of the Constitutional Tribunal. “I have talked about it many times, and I have never concealed that abortion for so-called eugenic reasons should not be allowed in Poland,” Duda said. “I believe that every child has a right to life.”

The children’s rights commissioner, Mikołaj Pawlak, supported the decision. He said that “eugenic” abortion amounts to “denying the right to life” as it “allows for the killing of an unborn child solely on the basis of suspicion of a serious disease”.

Few media reports looked into the Court’s reasoning. In language familiar to protesters in the US and UK over the past year or so, the author of the ruling, Justice Justyn Piskorski, wrote that the foetal abnormality provision “enabled the legalization of eugenic practices”.

He acknowledged that it was not the “authoritarian eugenics” which reached its apogee in the atrocities committed by doctors in Nazi Germany, but it did amount to a kind of “liberal eugenics”.

The ruling stressed that “human life is a value at every stage of development and … it should be protected by the legislator not only in the form of provisions guaranteeing human survival as a purely biological entity, but also as a whole being, for whose existence it is also necessary to have appropriate social, living and cultural conditions that make up the entire existence of an individual.”

In other words, it is not enough for Poland to ban birth-defect abortions; the government also has to be prepared to dig deep and provide support for the child and its mother.

The full judgement of the Tribunal is not yet available, but the link of abortion with eugenics is supported by an opinion written last year by Justice Clarence Thomas of the US Supreme Court. He declared that “abortion is an act rife with the potential for eugenic manipulation”. In a fascinating excursion into the link between abortion and eugenics, Justice Thomas contended that the two were inseparable:

Abortion advocates were sometimes candid about abortion’s eugenic possibilities. In 1959, for example, [future Planned Parenthood President Alan] Guttmacher explicitly endorsed eugenic reasons for abortion. He explained that “the quality of the parents must be taken into account,” including “[f]eeblemindedness,” and believed that “it should be permissible to abort any pregnancy . . . in which there is a strong probability of an abnormal or malformed infant.”

Instead of copping abuse from the world media and the Twitterverse for turning Poland into Gilead, Poles should be congratulated for standing up against eugenics, a perverse ideology tainted by its association with Nazism and racism.

Tweet This: "Poles should be congratulated for standing up against eugenics, a perverse ideology tainted by its association with Nazism and racism."

Editor's note: Michael Cook is the editor of Mercatornet. This article was published at Mercatornet and is republished with permission under a creative commons license. PHN filtered a Downs syndrome pejorative that was printed in full in the original article.