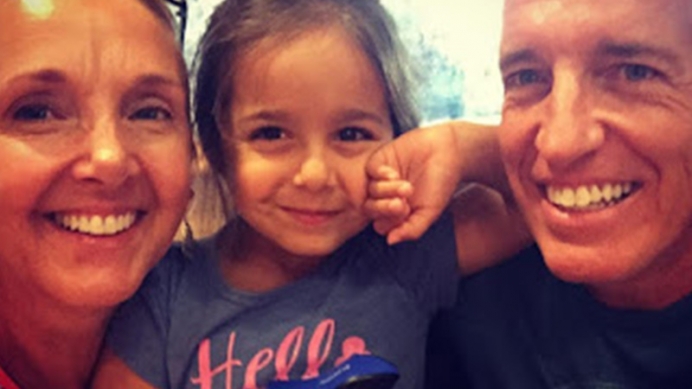 When Your Daughter Tells You She's Pregnant

When I was told by the local crisis pregnancy center that I was pregnant, I was given a "goodie bag" with a variety of handouts and information packets explaining my pregnancy, prenatal care, local OBGYN offices, and what to do next.

I took the packets home with me and read through them with my best friend that night, really just searching for any glimpse of hope or encouragement I could find. Among those packets was a small booklet and on the front was a picture of a girl with a worried look on her face.

The first page read, "When your daughter tells you she's pregnant, try not to overreact."

I don't know if it's because I was tired of crying, or still in shock, but I laughed. We both laughed. We threw around ideas of how to get the packet to my parents anonymously, knowing that there was no way on God's green earth that any parent would take this news lightly and not overreact even a little bit.

Nearly six years later, I have a much better understanding of how important that reaction really was. With thousands of abortions occurring daily, I'd be willing to bet a good majority of them are out of the fear of telling a parent or loved one.

The fear of that awful look of disappointment and despair. The fear of the angry words that may escape without forethought. The fear of the criticism, judgement, and shame. The fear of the guilt- oh that horrible guilt for disobeying your parents' best wishes for your purity. The fear of the irreparable damage this may do to your previous relationship with them. All of those fears become so immense, so quickly. It's indescribable really.

For the most part, I've written blogs about my own experience as a way of trying to encourage other young ladies facing those fears. But now as a mother myself, and with a better (albeit, not perfect) understanding of it all, I realized I've really never done much in the way of encouraging the unsuspecting parents. The day they discover their daughter is pregnant is similarly terrifying for them as it is for her, and although I don't know it personally, I experienced it face to face.

So I think, in hindsight, if I could have re-written that little packet I would have wanted it to say something more along these lines:

(Disclaimer: This is not solely based off of my own parents' reaction, but also others' experiences that have been shared with me.)

When she tells you she's pregnant, she will be terrified beyond comprehension. And so will you.

Her younger years and the dreams for her future will flash before your eyes. You will be disbelieving, angry and most of all utterly shocked because this can't be real, can it? Believe me when I say she has felt that already. Chances are she has already been through this phase, and will have been dreading watching you go through it, too. She knows full well how "big" this is, and has probably already cried over the many, many ways this will affect her future--and yours.

She is so scared, and that is why she is coming to you.

You chased the monsters from her closet, put bandaids on all her boo-boos, held her hand to help her overcome her fears, wiped her tears through many heart aches, and now she is here again for something so much bigger. And yet her needs are the same. She needs you to hug her, remind her of your unconditional love, and show her that this too will eventually be okay. Even if you are unsure of that yourself.

She will have thought through every word she says to you, and she may have even rehearsed it to friends or other family members. She will be so nervous that she may stumble over what words to say to you. Do not misinterpret this for lack of caring or not understanding the depth of the situation. To her, words just may not be enough to encompass it all.

She will be expecting the worst. She will have already imagined the different ways you might react, and will be watching your every move, clinging to your every word, and desperately hoping your anger won't last forever.

She knows how she got here. She may even know the exact time and place this happened. But she also knows that moment cannot be changed now. No matter how badly she may wish she could go back and say this or do that.

You will be angry, disappointed, sad and a whole host of other things. You may want to ask, "How this?", "Why that?", "When?" because this is all so surreal that maybe having details will make it more understandable.

And she will feel every question like a blow to the chest.

An attack of her ability to make good, responsible decisions. Remember, she has already asked herself the same questions. She has the answers, but may not want to add to your obvious hurt and disappointment. Telling you she is pregnant may have been all that she can possibly muster up the courage for at this point.

How could she do this to her future? Didn't she think for even a minute about the consequences?

You bet she did. She may have already have done the "right thing" a hundred other times. But this one time, this one moment, those consequences she'd let sway her decisions before seemed very, very small when the much louder voice in her head was telling her everything would probably be fine.

What about him? Whoever he is. Well, this will vary from person to person. You may want to blame him. But remember he made the choice with her.

Lastly, when she tells you, take a moment to breathe and remember the bigger choice she made. At some point in the recent past she stared at a positive pregnancy test and felt the world shake around her. She felt every ounce of her being tremble with guilt and shame as she quietly weighed the options. Regardless of everything she was ever taught to believe, she knew there was more than one option and she may have seriously considered the alternatives.

But at some point, the choice for life took over and she knew, despite the uncertainty of it all, that this could be the better option. She may have thought that another poor decision couldn't possibly make for a better future, despite the lie that it would be made easier by preventing her from having this conversation with you.

She knew the choices. And by now she's made it. When she tells you, she's hoping you would make the same choice, too.  She wants to know that despite the huge ways this will impact her future, she made the better choice.

You won't feel like praising her for it just yet, but one day you will be ever grateful that she chose parenthood over a lifetime of guilt. Because one day you won't be able to imagine life without your grandchild. There will come a day that all this fear, disappointment, anger, and sadness will suddenly transform into an indescribable love.

Tweet This: How would you react if your daughter told you she was facing an unplanned pregnancy? Here's what Lauren wishes her parents would have known. #prolife

This moment, right here, right now with her?

It will be but a blip in the distant past and you'll wonder how you ever doubted that this could possibly be a good thing. All that you're afraid of will be replaced with tiny fingers and toes, toothless smiles and contagious giggling, cuddles and sloppy kisses, more excitement and joy than you can even imagine right now.

When she tells you that she's pregnant, she'll be terrified beyond comprehension. And so will you. But you'll need each other to get through it. Show her once again what any good parent does for their frightened child. She's got an extra reason to watch you now.

Lauren Urrea is a Physician Assistant at a family practice in small town Elkin, North Carolina. However, she spent most of her life growing up in Virginia and considers herself a forever Hokie after earning her Bachelor's at Virginia Tech.

She is passionate about the pro-life movement, so she also spends many of her lunch breaks performing routine OB ultrasounds at Lifeline Pregnancy Help Center. She has documented her own journey through an unplanned pregnancy on her blog: lknuppel.blogspot.com.

She currently lives in Winston-Salem, North Carolina with her husband and 3 precious children, who are her daily reminders of God's faithfulness and grace.