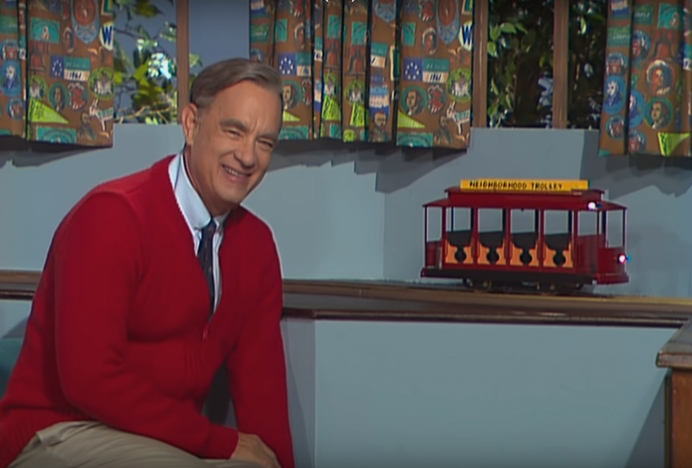 What Mr. Rogers taught me about Michelle Williams

Over the Christmas holidays, Jenn and I got to see the movie about Mr. Rogers (It’s a Beautiful Day in the Neighborhood). I cried three times. I’m a mess, I admit it.

If you haven’t seen the movie and can still find it in your theater, go. I mean it. Go. It’s one of the most powerful movies I’ve ever seen.

It’s hard to extrapolate exactly what moved me so much, except to say that as a kid, I thought Mr. Rogers cared about me. Yet as an adult watching this movie, I realized Fred Rogers cared about everyone who came into his life. To Mr. Rogers, people mattered. Every single one.

Without giving away the entire film, a moment in the beginning encompasses so much. A jaded magazine reporter—the film’s main character—is sporting an obvious and painful-looking wound on the bridge of his nose when he first meets Mr. Rogers for a brief interview.

When Mr. Rogers asks about the bruise, the reporter (Lloyd) says it came from a softball game. But after a few moments, he admits the truth: He got into a fight at his sister’s wedding.

Mr. Rogers looks at Lloyd and with incredible compassion, saying, “Oh, I’m so, so sorry.”

There’s no judgment, no “How could you ruin your own sister’s wedding by getting into a fight, for goodness’ sake?” None of that. As Lloyd shares more, Mr. Rogers never offers advice, never attempts to correct him or “help” him see the error of his actions.

Throughout the movie, Lloyd and Mr. Rogers build an odd relationship, leading to trust. Watch the movie. You’ll see how Mr. Rogers influences Lloyd in such a “Beautiful Day in the Neighborhood” way.

An actress and “The Speech”

Which brings me to Michelle Williams, the actress who recently made news with her acceptance speech at the Golden Globe Awards.

During her speech, Williams said she is “grateful to have lived in a moment in our society where choice exists, because as women and as girls, things can happen to our bodies that are not our choice.”

Williams went on to say her many achievements would not have happened “without employing a woman’s right to choose,” heavily implying that she once chose abortion.

I’ve read the hot takes from both sides of the abortion debate. When Williams spoke, those in the audience applauded. Some were so moved by her willingness to support abortion, they were driven to tears.

On the pro-life side, I read that the applause she received was clear evidence that our nation’s moral compass is gone. And also shock that she would place her desire for professional success above her child.

One side celebrates. The other shakes its head, wondering how our culture could go so wrong.

Tonya Baker-Nelson however, gives us a beautiful take, a perspective from a mom who faced the same decision as Williams. It’s well-worth your time to read it.

The story behind the story

A quick fact about Michelle Williams. She was emancipated from her parents at the age of 15, in 1995.

But not because of a terrible home life. In her situation, emancipation meant she could pursue her career in acting without being subject to child labor laws.

She moved out of her family’s home in San Diego to Burbank, at 15 or 16 years old. By the time she was 18 she was still on her own in Wilmington, NC where she starred in the series, Dawson’s Creek.

All on her own. From what I can tell, she kept her relationship with her parents, but still. I can’t imagine making grown-up decisions at 16. Or 17. Or 18. On top of this, having to make those decisions in the upside-down world of TV and film. But she did.

What would Fred do?

I’ve never been in Tonya’s shoes and can’t bring her incredible perspective to Michelle Williams. Instead I thought of Fred Rogers. Mr. Rogers. And I believe, if he heard her private stories of choices she made years ago, he might say, “Oh, I’m so sorry.”

Tweet This: ”And I believe, if he heard her private stories of choices she made years ago, he might say, “Oh, I’m so sorry.”

Mr. Rogers might also affirm her for so many things. She is a talented actress, just watch her play P. T. Barnum’s wife in The Greatest Showman and we’ll see this. She’s apparently extremely bright; at 17 she was the first female to win the Robbins World Cup futures trading competition, which her father won 10 years earlier.

Mr. Rogers might also compliment her drive to succeed, her commitment to setting and achieving so many goals.

In the end, I don’t think Mr. Rogers would define Michelle Williams by one decision, or one speech. He would find the good and have compassion for any decisions regretted later. And, he would see the great potential for good to come.