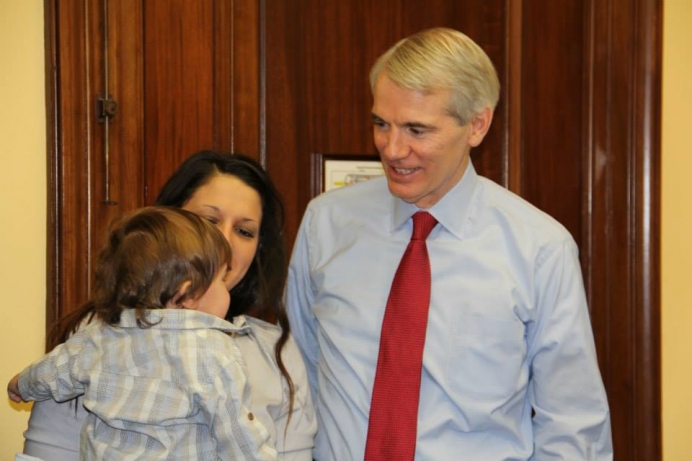 WASHINGTON, D.C. -- On paper, Laura's visit to her congressman, Sen. Rob Portman (R-Ohio) was just another stop in a busy day on Capitol Hill as part of Heartbeat International’s Babies Go to Congress.

In reality, a visit like this could change the world.

Accompanied by her 1-year-old son, Mason, and representatives from Columbus-based Pregnancy Decision Health Centers and Heartbeat International, Laura told Sen. Portman and his staff how she had found herself pregnant, scared and confused at 19-years-old.

Laura recalled how, at her moment of decision, confusion and fear, Pregnancy Decision Health Centers was there for her, offering real help and hope that not only saved her son, but also set her on a course of deliverance from a pattern of self-destructive behavior.

In the Senator's office, Laura recounted the first time she went to Pregnancy Health Decision Centers and had an ultrasound performed. She could hear her baby’s heartbeat. At this moment, Laura says, she knew “it wasn't going to be the end of my life; it was going to be the start of it.”

As he heard the story and watched little Mason in his office, Sen. Portman realized right away that the Child Custody Protection Act he was about to introduce just hours later has the potential to directly impact mothers and children just like those standing before him.

Sen. Portman, who sports a National Right to Life Rating of 100 percent, mentioned the visit in his speech introducing the bill, and had his staff follow up and ask permission to use Mason’s name in his upcoming talks and speeches centering around pro-life issues.

“I went to Washington, D.C. last week because it is important to communicate to our lawmakers the impact that pregnancy help centers are having in the districts of their constituents,” Sara Nass, Caring Services Coordinator for Pregnancy Decision Health Centers said. “Not only is it beneficial to meet with those who do not share the same pro-life values, but it is also important to show support to those who take up the cause of life in an often hostile environment and let them know that they are making a difference, and we are grateful for their stand.”

Sen. Portman’s Child Custody Protection Act would make it a federal offense to transport a minor across a state line for an abortion if it would circumvent a state law requiring parental involvement in that minor’s abortion. (Click here to read the official press release.)

The Child Custody Protection Act provides criminal and civil penalties in the form of fines or imprisonment up to one year, or both, for knowingly transporting a minor across a state line to skirt parental consent or notification law for abortion that is in effect in the minor's state of residence.

Sen. Portman, whose current committee assignments include the Senate Finance Committee and Senate Committee On Homeland Security And Government Affairs, was elected to his current U.S. Senate seat in 2010 after serving from 1993-2005 as a U.S. Representative for Ohio.

“I am proud of my 100 percent pro-life record in the Senate and am fully committed to protecting the sanctity of life,” Portman said in his press release announcing the Child Custody Protection Act. “This legislation simply says that parents have a right to be involved in their kids’ most important decisions, a view supported by an overwhelming majority of Americans.”