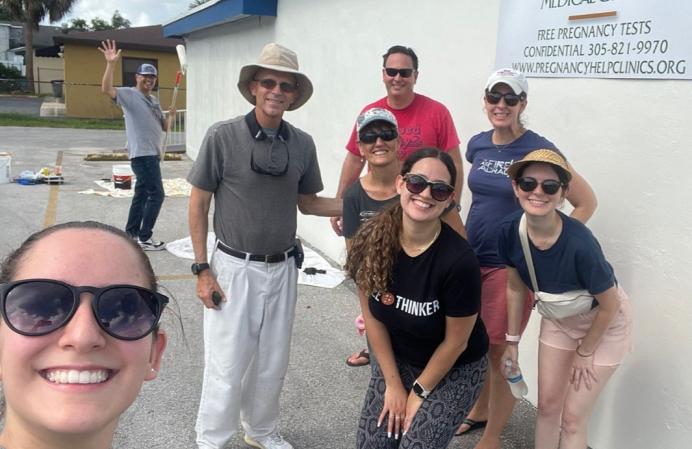 Members of Heartbeat of Miami staff, board, and friends gave their time over the Fourth of July holiday weekend to clean up the mess left by pro-abortion vandals. The pregnancy help medical clinic's Hialeah center opened Tuesday, July 5, and provided 20 women life-affirming care and assistance. Heartbeat of Miami

"They did not think twice" - Volunteers rally to help Fla. center clean up, re-open right after pro-abortion attack

Pro-abortion advocates attacked one of the pregnancy centers operated by Heartbeat of Miami during the Fourth of July holiday, painting graffiti on walls and damaging security cameras. However, their attempt to stop life-affirming service to women was thwarted as area pro-lifers rallied, helping the center re-open on July 5.

On Sunday morning, July 3, the husband of executive director Martha Avila checked the center’s security cameras, which had been installed recently at the encouragement of the FBI after threats had been made against the Hialeah facility, one of four locations operated by Heartbeat of Miami. What Avila’s husband found that morning prompted the couple to drive to the center.

“It looked like something went wrong with the cameras, but they were newly-installed,” Martha Avila said.

“My husband went back to see when the cameras stopped working,” she said, “and he realized that the cameras had been vandalized. So, we went to the center immediately, and I met one of my co-workers there.”

What they discovered shocked Avila.

“I said, ‘I can't believe this, I just can’t believe this,’” she recalled. “But how could I not believe it when they threatened us that things were going to happen?”

Graffiti plastered walls, and the letter “A” that had also been scrawled at other pregnancy centers attacked by extreme pro-abortion proponents glared from the Hialeah center’s on-site sign.

Thankfully, no windows were broken nor was a fire set to the building.

However, during Sunday and the Monday holiday, Avila wondered about re-opening for business by Tuesday, July 5, when the center was scheduled to receive clients.

“I was saying, “How am I going to get this fixed on a Fourth of July weekend?’” she said.

The police arrived and a detective talked with Avila. The town’s mayor also called her.

“They got involved from the very beginning,” she said. “I even received another call from the mayor’s chief of staff who told me, ‘Martha, we're going to get to the bottom of this.’”

Additionally, a television news crew arrived on-scene and broadcast a story; another news station picked it up as well.

From vandalism to serving clients

As Avila pondered about re-opening, her assistant contacted her.

“She said, ‘Please trust me – I’ve got this,’” Avila remembered.

The assistant and a board member, along with several of their friends, repainted the outside of the building and scrubbed the “A” from the center’s sign.

“To God’s glory, by 11 o'clock on the 4th of July, everything was painted again,” Avila said. “They gave up their holiday time to make sure we’d open on Tuesday.”

Avila, her staff and center volunteers welcomed 20 women on Tuesday, July 5. Sixteen of those women were undecided about their pregnancies, Avila said. After visiting the center, 14 left with plans to continue their pregnancies; two remained undecided, but staff will continue to follow-up with them, she said.

“Sixteen were at risk of abortion,” Avila said. “We were able to open our doors.”

Tweet This: Heartbeat of Miami was able to clean up & reopen swiftly after pro-abortion vandals attacked its Hialeah center-serving 20 women the 1st day

Additional media member showed up that day as well, she added.

“None of my employees were intimidated, and none of the women asked what was going on,” Avila said. “It was like God just let everything flow. You know, our clinics are packed every day.”

Prior to and since the Supreme Court Dobbs decision overturning Roe v. Wade in June, many pro-life organizations, pregnancy centers, and churches have been attacked, many by a group calling itself Jane’s Revenge. Fire bombings took place at Wisconsin Family Action and the Buffalo, New York, location of CompassCare, a pregnancy medical resource center, and a small Baptist church in Alabama experienced graffiti similar to other locations, and many other places of worship across the country, especially those of the Catholic faith, have been similarly attacked.

In addition to the attack on Heartbeat of Miami, vandals have targeted pregnancy help centers across the country, including the Community Pregnancy Center in Anchorage, AK; Agape Pregnancy Center in Des Moines, IA; and First Care Women’s Health center in Virginia, among many others. At press time there had been at least 90 estimated attacks on U.S. pregnancy help centers, pro-life organizations or churches following the May 2 Dobbs draft majority opinion leak.

Avila said she doesn’t understand why these attacks occur if pro-abortion advocates believe in choice.

“If they really believe in choices, why can't they consider that we are giving (women) choices (when they come to pregnancy centers)?” she pondered.

“I can’t make anyone that walks through these clinic doors choose what they don't want to choose,” Avila said. “Just like with a child – we have no control over them; they do whatever they want, and there's nothing that you can say or do to make them do something different.”

Tweet This: “If they really believe in choices, why can't they consider that we are giving women choices when they come to pregnancy centers?”

Avila and her staff continue their mission to help women in the Miami-Dade area, and they have no intention to quit. She remains grateful for the people who helped restore the Hialeah clinic and said she looks forward to the organization’s September fundraising gala for the group of centers she manages, celebrating 15 years of service in the Miami area.

She posted these thoughts on her Facebook page after the July attack:

“Yesterday was a very difficult day. As many have heard, pro-abortion terrorists attacked and vandalized our Pregnancy Help Medical Clinic in Hialeah, FL, causing thousands of dollars in damages to our building and security system. Today, a wonderful group of volunteers from our community …showed up at the clinic, rolled up their sleeves and got to work. They did not think twice about putting aside holiday plans in order to come out and work on cleaning up the mess that vandals left behind.”