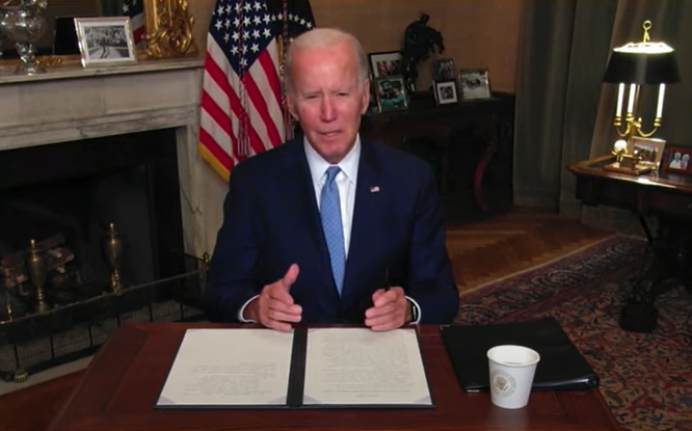 (The Washington Stand) President Joe Biden signed an executive order on Wednesday that could force taxpayers to pay the costs of women who travel to another state to have an abortion.

The order directs Health and Human Services Secretary Xavier Becerra to “consider actions to advance access to reproductive health care services, including, to the extent permitted by [f]ederal law, through Medicaid for patients traveling across [s]tate lines for medical care.”

The decree “paves the way for Medicaid to pay for abortions for women having to travel out of state,” said White House spokesperson Karine Jean-Pierre at Wednesday’s press briefing.

While most legal commentators believed the order would compel citizens to underwrite the cost of transporting women from pro-life states to areas with more lax regulations on the abortion industry, Jean-Pierre seemed to indicate the president wants Americans to pay for the abortion itself. “From what I understand, it is for them to pay for [the] abortion procedure,” she told a reporter, adding that she would have to “get more detail on that. I want to make sure I get that right.”

When asked how the executive order could comply with the Hyde Amendment — which bars Medicaid from funding abortion except for rape, incest, or to save the life of the mother — Jean-Pierre replied, “That is something that HHS will come up with.”

The order would invite states to apply for Section 1115 waivers to Medicaid, which approves the creation of “experimental, pilot, or demonstration projects.” Already, 16 states fund elective abortions through their state Medicaid programs.

Experts say pro-life advocates would have to fight Biden in court to prevent the federal government, which is $30 trillion in debt, from defraying the cost to take mothers across state lines for abortions that would already be covered by Hyde. “Unfortunately, the question on the legality of it is unanswered. It is an untested interpretation of the Hyde language of whether it precludes travel for abortion if your state does not provide it,” Connor Semelsberger, director of Federal Affairs at Family Research Council, told TWS. The legal dispute “ultimately will be something the federal courts will have to reconcile.”

Biden’s EO would also allow the federal government to change the way it measures whether women’s health suffers from lack of access to abortion. The order calls on federal agencies to “improve” their “data collection and data analysis” concerning “the effect of access to reproductive health care on maternal health outcomes and other health outcomes.” Biden similarly changed the way the government analyzed the often-crippling cost of environmental regulations by requiring regulators to tally the “social cost” of greenhouse gases in an executive order signed on his first day in office.

The maternal health data could mislead Americans about the safety of abortion. “We already do not have national abortion statistics, let alone reporting on complications related to abortion,” Semelsberger explained. Three states — California, Maryland, and New Hampshire — do not report their abortion statistics to the federal government. The Biden administration could use the new criteria as “a tool” to assert that “maternal mortality and morbidity are higher in states that restrict abortion, i.e., that restricting abortion increases maternal health risks.”

“Thankfully,” he said, “states will have a lot of their own data that can give us a true read” on the matter.

Biden signed the new guidelines, which significantly build on his previous abortion-themed executive order signed on July 8, at the first meeting of his Task Force on Reproductive Healthcare Access, allegedly to fight “the health care crisis that has unfolded since the Supreme Court struck down Roe.”

Tweet This: Joe Biden's executive order “paves the way for Medicaid to pay for abortions for women having to travel out of state”

He then introduced Vice President Kamala Harris, who engaged in one of her regular word jams, repeating the phrase “the women of America” at least five times. Near the end of her presentation, Harris pulled out a tiny, illegible map approximately the size of a piece of paper, intended to show the state of abortion access in the United States. “You don’t need to necessarily be able to read the words on the map, but you can see the color coding,” she offered. Harris added that “some” might say states had passed pro-life laws “to deliberately confuse people about their rights.” The Supreme Court ruled that the U.S. Constitution contains no right to abortion in its Dobbs decision on June 24.

HHS Secretary Xavier Becerra insisted, “The Supreme Court’s misguided decision put the lives of millions of Americans — our fellow Americans — at risk.” As many as 63,459,781 unborn Americans lost their lives to abortion between 1973 and 2019, according to the National Right to Life Committee. Not a single woman is known to have died from the theoretical health concerns raised by the White House since the Dobbs ruling.

Editor's note: This article was published by The Washington Stand and is reprinted with permission.