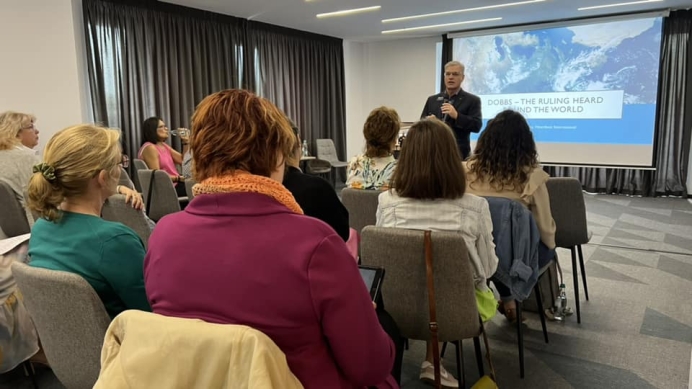 It started with a kiss. First on the left cheek, then on the right. Embracing one another as though we had known one another as lifelong friends, though the reality is that we had just met.

Sharing a common mission - to empower women so they don’t ever feel abortion is their only option - Heartbeat International’s European Pregnancy Help Summit was about to begin.

More than 60 pregnancy help leaders, representing 22 organizations in 19 different European countries came together in Bucharest, Romania, September 15-17, 2022, to be inspired, educated, and meet lifelong friends over the next three days.

Some attendees were celebrating 10 or 20 years in the movement. Others were new friends in the pregnancy help movement, including a woman from Norway who could not help but share her joy in finding like-minded people with a desire to transform their cultures by reaching and rescuing one woman in an unplanned pregnancy at a time.

Together, we would learn, laugh, and let the Holy Spirit work.

From Norway to Ukraine and Switzerland to Malta, we discovered that while each country may face unique challenges, we all have a singular mission — to advance a culture of life.

Malta, the only country in Europe where abortion is illegal, is under extreme pressure by outside forces to change its pro-life laws. While they have great support from their government, external organizations are investing a lot of money and resources into pushing the abortion agenda across the island nation.

Similarly, Ireland’s pregnancy centers are under an aggressive media attack since abortion became legal less than five years ago. Couple that with pro-abortion officials attempting to regulate the pregnancy centers in extreme ways in order to silence their life-affirming efforts, and the pressure is incredibly high.

These pro-abortion campaigns target younger generations with lies that abortion is a human right that gives one freedom and allows success; all while working behind the scenes to silence any life-affirming option, leaving women with only one option — abortion.

Moving east, the former Soviet countries are still — even 30 years later — struggling to overcome the hopelessness and despair forced upon them by generations of Communist oppression. The women in these countries find it hard to trust even compassionate care offered without any strings.

With various empires dominating their past, the pregnancy help leaders in this region are working diligently to shift the mindsets of the women and men in their communities to understand what unconditional love is, and that each person is worthy to receive it.

Each person understood the light of truth he or she had been called to carry in their country. Each leader knew that the work being done with each woman in each center was an opportunity to change the mind and heart of one person - and save a life along the way. And that chance makes it all worth it!

Tweet This: Each person at Heartbeat International's European Summit understood the light of truth he or she had been called to carry in their country.

The energy in the room was high and as one attendee pointed out, it was not unlike Pentecost - when disciples heard and spoke the Word of God in each of their native language so that all may hear the truth.

Strong relationships and closely knit networks can bolster true change. The European Summit offered an opportunity to grow the community and share resources to strengthen the pregnancy help movement.

Where two or three are gathered, God is present. Imagine the result when 60+ join together!

Andrea Trudden is the VP of Communications and Marketing for Heartbeat International. She is a pro-life writer with a passion for promoting the positive solutions pregnancy help organizations provide for the entire family.