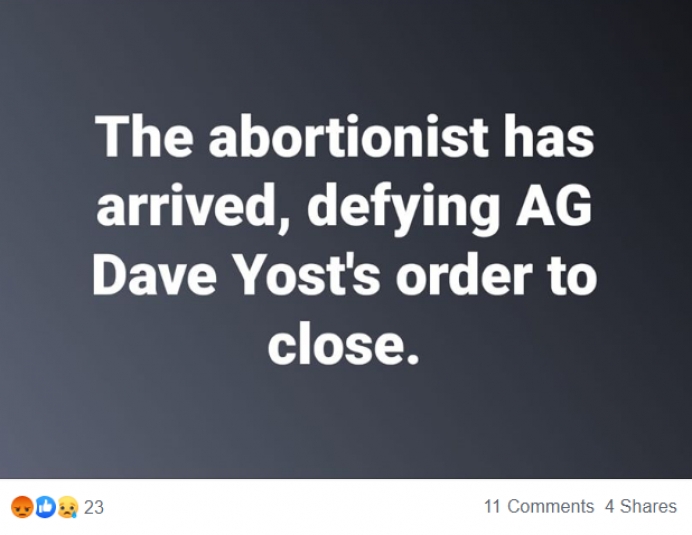 Protecting the weakest: These states demand an end to surgical abortions during the COVID-19 pandemic

(Live Action) Some states have ordered a halt to abortions in conjunction with their efforts to protect other at-risk populations during the COVID-19 pandemic.

Individuals, cities, states, and nations have taken extraordinary measures to protect those who are most at-risk of falling ill with the coronavirus, including the elderly and the immunocompromised. People have sacrificed church services, liberty, finances, and non-essential surgeries, among other things, all in an effort to save every life possible.

And yet, the abortion industry largely continues to take human lives, while states have issued orders to halt all non-essential and elective procedures. Abortion is, of course, not a medical procedure at all — it is the deliberate taking of innocent human life. It should never happen, let alone during a time when governments are pulling out all the stops to protect human lives.

Some states have rightly included abortion in their list of procedures that must be halted during this time.

Live Action News has documented the ongoing refusal of abortion facilities — including Planned Parenthood — to close in the state.

They are currently in violation of an order from the state Department of Health, as well as an order from Ohio Attorney General Dave Yost’s office to halt surgical abortions.

The Daily Caller reports that now, the DOH is issuing cease and desist letters to abortion facilities in violation of these orders. Press secretary Melanie Amato told the DC, “This is now an enforcement issue.”

On Monday, The Columbus Dispatch paper reported, “According Yost’s office, the health department will investigate to determine if the clinics are performing non-essential surgeries or procedures. If they are, Acton can ask the Attorney General to take legal action against them.”

From the Dispatch report:

Amato, the health department spokeswoman, in a statement said, “the Ohio Department of Health has been made aware of allegations that some health care providers appear to have violated the order on performing non-elective procedures. When ODH is made aware of allegations that medical facilities are not being complied with ODH’s order, ODH is asking the Ohio Attorney General’s Office to issue cease and desist orders. These orders have started going out.”

One of the clinics, Planned Parenthood Southwest Ohio Region, which operates the Cincinnati clinic, said it would remain open to provide essential services, including surgical abortions, in compliance with Acton’s order.

Pro-life groups in the state provided evidence that abortion facilities were open despite the COVID-19 order.

Planned Parenthood issued a statement on Twitter, claiming to be in compliance with Ohio’s order, and deceptively calling abortion an “essential, time-sensitive medical procedure.” In response, Live Action president Lila Rose tweeted, “Planned Parenthood @PPFA has publicly announced they will DEFY Ohio’s order to close & instead will continue committing abortions. Their lies & bloodlust know no limit.”

Texas Governor Greg Abbott (R) issued his COVID-19 order on March 22, 2020, prohibiting procedures unless a patient faces “serious adverse medical consequences or death, as determined by the patient’s physician.” The governor, who is admittedly pro-life, confirmed to the Dallas NBC affiliate that the order “would cover abortion in most cases while the order is in place until April 21”:

Texas Attorney General Ken Paxton said the COVID-19 pandemic has created an increased demand for hospital beds and personal protective equipment and that postponing elective surgeries leaves some of those beds available for COVID-19 patients…. Paxton said Monday afternoon that anyone failing to comply with the governor’s executive order faces fines up to $1,000 or 180 days in jail.

“We must work together as Texans to stop the spread of COVID-19 and ensure that our health care professionals and facilities have all the resources they need to fight the virus at this time,” said Attorney General Paxton in an online statement. “No one is exempt from the governor’s executive order on medically unnecessary surgeries and procedures, including abortion providers. Those who violate the governor’s order will be met with the full force of the law.”

No word yet on whether abortion facilities in Texas will defy this order like they are in Ohio.

CBS News reporter Kate Smith, who supports abortion, spoke to Whole Woman’s Health abortion chain president Amy Hagstrom Miller, who deceptively  called abortion “essential healthcare, and… a time-sensitive procedure,” but did not indicate she would be willing to risk a fine or jail time to commit them.

Abortion profiteers seem to be using every opportunity to exploit the crisis for their own profitable gain.

In response, pro-life leaders are encouraging governors across the nation to halt abortions and protect all lives now and after the pandemic passes. That includes Live Action’s founder and President Lila Rose, who recently released a statement that reads in part, “Abortion always targets and violently destroys an innocent human being. As nations all over the world unite to fight COVID-19 under the shared understanding that every human life is precious, it is unconscionable that our leaders would continue to allow the one industry that exists to kill and destroy human life to continue to operate.”

Editor' note: This article was published by Live Action News and is reprinted with permission.