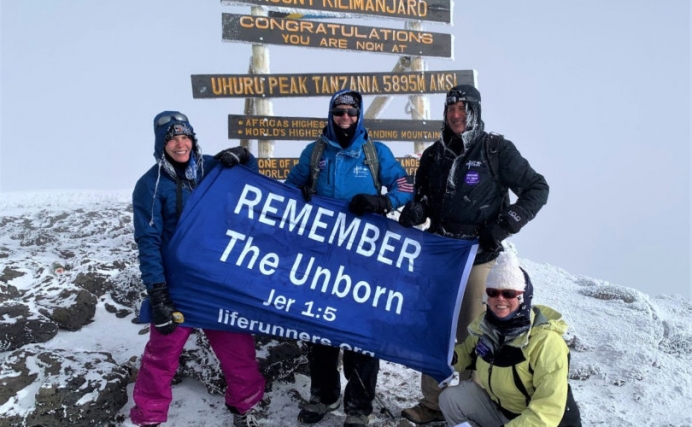 LIFE Runners founder hopes that 'people could be inspired that we didn’t turn around. That we were willing to suffer those conditions to inspire people to do more for the least of the least.'

(LifeSiteNews) Four pro-life warriors had an unexpected brush with danger while climbing to the peak of Mt. Kilimanjaro, an effort made to inspire pro-lifers to work harder for the unborn.

In proclaiming their message “Remember the Unborn” from a literal mountaintop, the team hoped to spark life-saving work. As it turned out, the mountain climbers’ own lives were threatened during the last leg of their four-and-a-half day hike up Mt. Kilimanjaro.

The climbers were among pro-life witnesses invited by Archbishop Ruzoka of Tabora to Tanzania to discuss the “how” and “why” of LIFE Runners’ pro-life mission, testimony they shared last month as they visited an albino orphanage, an in-the-works Ifucha Divine Mercy Shrine in Tabora, a convent, and a monastery. A contingent of the group ended their trip with a climb to the top of the world’s highest free-standing mountain rise.

“The Mt. Kilimanjaro week was to inspire the Body of Christ pro-lifers to do more: to pray more, to stand in front of the abortion facility in prayer, to speak up, to encourage,” Dr. Pat Castle, the founder of Life Runners, told LifeSiteNews last Friday over the phone.

The group included Bishop Joe Coffey of the U.S. military archdiocese, who had already climbed the mountain twice. The team was expecting the trek to be challenging, said Castle, “but we did not calculate [that] it could be life-threatening.”

Castle described the experience to LifeSiteNews as a kind of “refiner’s fire.” As the group made their final, steep ascent up the mountain at midnight, they were swept up in a full-fledged blizzard: high winds, sub-zero temperatures, and visibility so bad, their guide was lost for two hours.

“All of us were concerned that we might not survive,” said Castle. This “inspired intense prayers with every step for hours.”

“Our guide told us afterwards, people die up here in those conditions,” he continued. “I suppose if we got disoriented any more or lost in that blizzard, someone could have been overcome by the elements, because there was no cell phone coverage, there was no medical help. The closest help would have been two or three hours down that mountain.”

Castle, who is himself retired military, has raced up the 14,000 ft Pikes Peak mountain in what is dubbed “America’s Ultimate Challenge,” and has led a marathon on the Great Wall of China. Even against these accomplishments, his Mt. Kilimanjaro climb was in many aspects, he told LifeSiteNews, “the hardest thing I’ve ever walked through.”

“Physically, this was,” said Castle. “Mentally?  Yeah, probably the hardest mental experience of my life. I mean I was wondering if I could move my next foot forward when we had two hours to go. Spiritually… wow. Maybe you could make the argument that it was also perhaps the most challenging from a spiritual standpoint, because of the life-threatening aspect, the God-honoring aspect.”

Bernadette Costello, who is “executive assistant to all things LIFE Runners in the world,” told LifeSiteNews through Castle that she had a mystical moment during the last ascent when she hit an ice wall. She remembers she had been meditating on Christ carrying his cross.

“It’s like that weight: no oxygen, and each step feels so heavy,” said Costello. When she hit the ice, she fell to the ground “as if falling with that cross.” There was a comforting sense that Christ was there present with her.

Castle affirmed that it was their “deep Catholic faith” that comforted the climbers during this perilous time, adding that they were also sustained by daily Mass said by Bishop Coffey. The experience, he said, moved the climbers to “surrender more and be closer to God.”

Upon reaching the mountain peak, Coffey, Castle, Costello, and Dolores Meehan—co-founder of the West Coast Walk for Life—were beaming as they posed for a snapshot with their “Remember the Unborn” banner. Also inscribed on the banner was “Jer 1:5,” referring to the Scripture passage, “Before I formed you in the womb, I knew you.” Bishop Coffey led the team in a prayer of thanksgiving.

As dangerous as the climb may have been, “[t]he most dangerous place on the planet is a mother’s womb,” Castle told LifeSiteNews.

“[There is] more loss of life in the womb than anywhere else; abortion is the leading cause of death in the world.”

Tweet This: “There is more loss of life in the womb than anywhere else; abortion is the leading cause of death in the world.” - LIFE Runners' Pat Castle

It was the recognition of the immensity of this evil, ultimately prompted by a miraculous encounter with St. Padre Pio, that led to Castle’s pro-life work. His encounter with St. Padre Pio led to a study of the book Unbound, “a book about evil” which, Castle said “identified abortion as the greatest evil not just of our time, but of all time—by the numbers, for one. The leading cause of death on the planet is abortion.”

“But also from a spiritual standpoint, if God’s greatest gift is our very life, then certainly the opposite of that would be stealing that gift, killing. So you can make case that abortion is the crowning jewel of Satan,” Castle continued.

This prompted Castle and his study group to dive into pro-life activism—praying in front of their local abortion facility once a month, and eventually running a marathon to raise money for ultrasound equipment “because 64% up to 90% of mothers in a crisis pregnancy that see their unborn baby ultrasound choose life,” said Castle.

LIFE Runner witness: The easiest way to save lives

Castle made clear to LifeSiteNews that the core of the LIFE Runner mission is wearing messaging that encourages women to choose life for their babies. Running is optional, and in fact only half of the world’s 16,557 teammates run.

“Everyone is qualified to be a LIFE Runner. Anyone who’s willing to put on a shirt, walk out in the world, and witness,” said Castle. 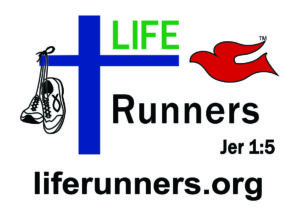 He explained the power of wearing these “Remember the Unborn” jerseys—the hallmark of LIFE Runners membership—with a staggering statistic, and stories to back it up.

A study by Students for Life found that “78% of post-abortion women said if just one person had offered support or if they viewed a supportive sign, they would have chosen life,” said Castle.

The “Remember the Unborn” shirt serves as just such a sign.

As an example of this simple but powerful “sign” phenomenon, Castle shared with LifeSiteNews the story of a woman who told him that she had visited the Hard Rock Cafe while in a crisis pregnancy in her early twenties.

“I was like Lord, if you want me to not have this abortion, I need a sign, I need encouragement,” she told Castle. While at the Hard Rock, she noticed a mural on a back wall that said, “The birth of rock and roll”—and the sun was highlighting only the word “birth.” That was all it took to save her baby, she told Castle.

Castle asks everyone, “Wherever you are on the globe…if you could wear that ‘Remember the Unborn’ message on your back, out your front door… so that someone in the grocery store line, someone walking around the block, at a sporting event, at church, at school, that is in a crisis pregnancy sees your message on the back,” and takes it as a sign not to drive to an abortion facility.

Members also have the option of joining active LIFE Runner chapters, which gather monthly in their jerseys to give witness as they take part in activities like witness walks and prayer in front of abortion facilities.

All are invited to join LIFE Runners for this year’s Indianapolis Marathon events on Nov 5th and 6th, including a Kids Fun Run, 5K, Half marathon, Full marathon. The American record holder in the mile, Alan Webb, plans to speak at the LIFE Runners pre-race dinner.  Find the event schedule HERE.

Registration to become a LIFE Runners member can be found HERE: https://www.liferunners.org/join-now-2/