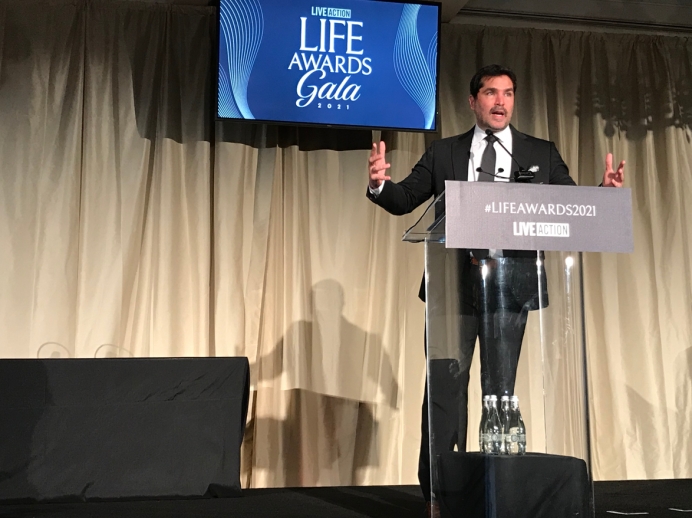 An encounter at an abortion clinic changed this actor’s life

(CNA) Eduardo Verastegui, the producer and star of the film “Bella,” on Saturday recalled a moment where he realized his movie helped save a life.

Verastegui addressed the Aug. 21 gala of the pro-life group Live Action, held in Dana Point, California. He received a “Life Award” from the group for his pro-life work in the entertainment industry.

An actor and former soap opera star who hails from Mexico, Verastegui said he moved to Los Angeles at the age of 28; he had been working in the entertainment industry for 10 years at that time.

With the help of a friend, he started the production company Metanoia Films in 2004, stating his goal “of making movies that will not only entertain, but hopefully do make a difference in peoples’ lives.” He starred in and produced the 2006 film “Bella,” which in part tells the story of a woman who is considering having an abortion, but instead carries the baby to term.

To better understand his character in the film for “method” acting, Verastegui said that he visited an abortion clinic.

“I wanted to understand exactly the pain that any woman that is pregnant who sees abortion as her only exit,” he said. At the clinic, he recalled seeing girls of ages 14 and 15. One girl recognized him from his previous soap operas in Mexico. They began conversing, and the girl eventually lost her appointment at the clinic because she was so late, he recalled.

Months later, Verastegui said he received a call from the girl’s husband, telling him, “Eduardo, my boy was born yesterday.” He said he held the baby, who was named after him.

“It changed my heart, it changed my life,” he said of the encounter, “and I remember saying that day, ‘God, please forgive me for everything that I’ve done in my past. I want to dedicate my entire life, whatever time I have left, to defend life.

“That’s why I say this little movie changed the lives of so many people, including my own life,” he said.

Tweet This: “Bella” producer and star Eduardo Verastegui had an encounter at an abortion facility where he realized his work helped save a life.

Jackson was the sponsor of Louisiana’s Unsafe Abortion Protection Act, which put safety restrictions on abortion clinics in the state; the law was struck down by the U.S. Supreme Court in June 2020.

At the Aug. 21 gala, she emphasized the importance of the life issue, and of laws that uphold the right to life.

“Only what you do for God will last,” Jackson told the audience.

Lila Rose, president and founder of Live Action, noted the increase of pro-life legislation in the states as a reason for hope for the pro-life movement. However, she exhorted those in the movement to win over hearts and minds, and to not just focus on winning political battles.

“If we do not win the battle for hearts and minds, we will lose the legal war,” Rose said.