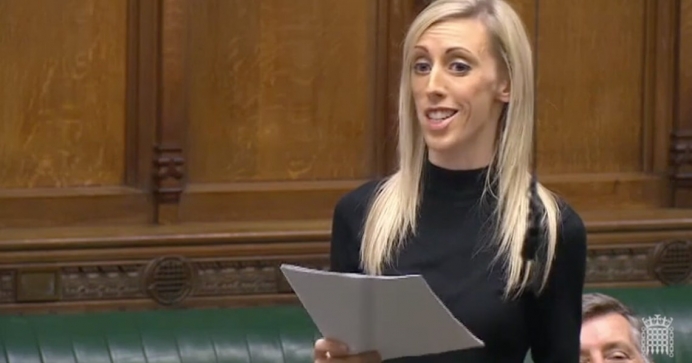 Editor's note: The following article was first published by Right to Life UK

A pro-life MP has used her maiden speech in the House of Commons on Wednesday (Jan. 8) to defend the right to life of unborn babies and calls for the Government to respect devolution in Northern Ireland.

DUP MP Carla Lockhart made her encouraging remarks during a debate on a recent report from the Northern Ireland Office on Westminster’s plans to impose extreme abortion laws in Northern Ireland.

Carla Lockhart won the Northern Ireland seat of Upper Bann with a majority of over 8,000.

In her speech, Ms Lockhart said:

“I now move to the motion at hand, and particularly the report concerning abortion. I feel it is imperative that I speak on this to attempt again to highlight the anger, disappointment and frustration concerning the change in abortion laws that have been foisted upon the people of Northern Ireland. These changes came in the most roughshod way, with complete contempt for the devolved Administration and the views of the people of Northern Ireland. I want today to make the point to this House, on behalf of the many thousands of people across Northern Ireland who take a pro-life stance, that we want to repeal section 9 with immediate effect and allow for the Northern Ireland Assembly to debate, discuss and evidence-gather on this emotive issue.

“The Secretary of State has not intervened to assist in our crumbling healthcare system, or to fairly reward our healthcare workers or to avert the mental health crisis we are facing. He hasn’t done that because, in his own words,  he has said that these are ‘devolved issues’. Abortion was and should be a devolved matter, yet this House has imposed on Northern Ireland the most extreme measures of abortion anywhere across Europe.

“Northern Ireland has been a country that has always supported life-affirming laws. Back in 1967, our politicians said no to the ‘67 Abortion Act, and according to research conducted by Both Lives Matter, 100,000 people are alive today. England and Wales back then did support the Act, and as a result over 8 million babies have been aborted—three every minute, 23 every hour or 561 every day, and that’s only a small percentage of them being aborted on the grounds of sexual crime or fatal foetal abnormality.

“Great credence has been given to the CEDAW report and the hon. Member for Congleton (Fiona Bruce) mentioned the three instances. However, we believe that the abortion framework that looks likely to be proposed by the Northern Ireland Office will go far beyond allowing abortion on these grounds. It is my understanding that no consultation will take place on the legislative text of the regulations. With regard to abortion, it is well known that the detail of the text is crucial. The ask on that is that we, at least, as parliamentarians are ​consulted before the specific text is laid, and I welcome the Minister’s commitment to meet those Members who are concerned in that regard.

“In Northern Ireland, abortion on request for any reason will be legalised to the point at which a baby is ‘capable of being born alive’.

“This includes on the grounds of disability. I implore my right hon. Friend the Secretary of State and the Minister to accede to the request to have section 9 repealed as part of the ongoing negotiations. The DUP are a pro-life party, but this actually crosses traditional boundaries and there is widespread cross-community support across Northern Ireland. We have an evolving political landscape, and I say let the people of Northern Ireland have their say on this matter.

“On this, Mr Speaker, I will bring my remarks to a close. I want a society in Northern Ireland that values life, and I want to see services that will help women choose life. We want to see a perinatal palliative care centre, a maternal mental health unit and better childcare services, and that is my ask of this Government. Help us create a culture of choosing life, as opposed to killing an innocent little baby that does not have the voice to say, ‘No, mummy!’ Mr Speaker, it is incomprehensible that the Government, knowing that abortion was a devolved matter, has published consultation proposals to introduce changes which go far beyond what has actually been required by Parliament. If the Government wants to maintain any commitment to devolution, I would implore them to rethink their coach-and-horses approach to a life-and-death piece of legislation.”

Tweet This: "I want a society in Northern Ireland that values life, and I want to see services that will help women choose life"

Closing the debate, Conservative MP Robin Walker stated how, in the previous debate on Northern Ireland,  he was “getting beaten up very heavily by pro-choice colleagues on the Opposition Benches,” yet, “on this occasion, perhaps the voice was slightly louder from the pro-life people.”

After the debate, Ms Lockhart posted on Facebook “This evening I had the honour of making my maiden speech as the MP for Upper Bann. Whilst I did take the time to highlight and showcase this great constituency I represent, it was also an opportunity to speak on the debate covering the introduction of abortion legislation in Northern Ireland.

“I am unapologetically pro-life and look forward to challenging the Government on this alongside other pro-life members from across the House.”

A spokesperson for Right To Life UK, Catherine Robinson said:

“It was hugely encouraging to see a new MP use her maiden speech to speak out so clearly about the right to life for the unborn.

“This is further evidence that supports our analysis which concludes that the make-up of the new parliament is significantly more pro-life than the previous one.

“We share in Ms Lockhart’s disappointment and frustration concerning the imposition of extreme abortion laws in Northern Ireland by a Government who claims to support the devolution settlement.

“We will support Carla and other MPs in their efforts to hold the Government to account on their words in regard to devolution, as doing so will help protect the lives of unborn babies in Northern Ireland.”