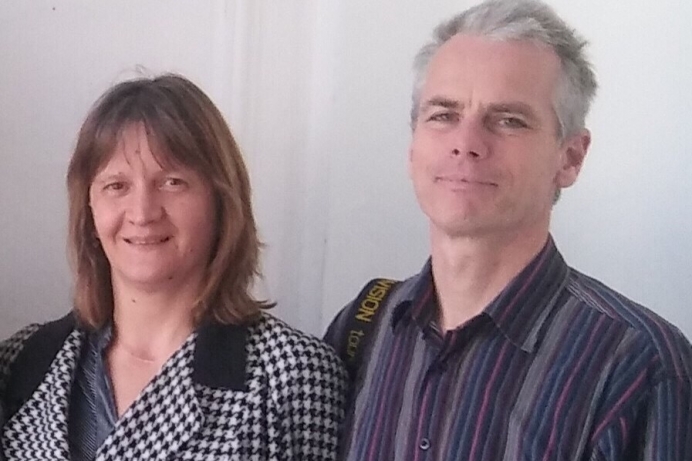 Pro-life in Hungary: One Couple's Mission to Turn Back the Tide of Abortion

Shout for Life Association in Hungary has found creative ways to take its powerful pro-life message to youth on school campuses and at a concert, to women facing unexpected pregnancies, to hard-working family nurses and doctors, into government forums, and even to the UN.

And all this began with a chance encounter on the streets of Jerusalem in 1998.

“Before we went to Israel, we knew nothing about the pro-life movement,” said Ed Bergs, co-founder with his wife Susan of Shout for Life Association. They never expected their year-long visit to the Holy Land—a combination honeymoon and follow-up with immigrant Ukrainian Jews whom Ed had aided—to reveal a new direction for their lives.

“On our honeymoon there, we came into contact with this pro-life organization called Be’ad Chaim in Israel,” Bergs said. “Ted Walker, then director of this Israeli organization, really showed us what abortion means.”

Intrigued, he and his wife joined in the work. Besides helping distribute leaflets, they visited pregnancy help centers across Israel to pray for staff and clients, giving them their first-ever glimpse into this kind of ministry.

They returned home determined to reproduce the same life-saving model across Hungary, where the abortion industry was then claiming nearly 60,000 lives a year. That number has since been reduced by almost half.

A few years later, at a pro-life conference in Holland, the Bergses connected with LIFE International, a Michigan-based organization that helps Christian leaders around the world to carry out life-affirming ministry. Equipped with LIFE International’s training, counseling materials, and support, the couple went on to launch Shout for Life as a section under the Hungarian Society of Christian Doctors in 2000.

That same year, together with the Society, the Bergses offered Parliament members 250 copies of The Silent Scream, a video produced by former abortionist Bernard Nathanson showing ultrasound footage of an abortion in progress.

“One hundred people signed to accept the video,” said Susan Bergs. “Hopefully, they watched it.”

In 2003, Shout for Life Association stepped out on its own, opening a helpline to serve women in need. With a grant from the government, they were encouraged by Calvary Chapel in Budapest to “put a face on their mission,” by using rented space within the church building for a pregnancy help center.

“Ever since then, God has been faithful in providing the funds for us to stay open,” Bergs said, noting that the church has continued to support them even as their center has changed locations twice since that time.

“In the beginning, churches and pastors didn’t want to talk about abortion,” she said. “It was too dirty; it was taboo. At one of our first speaking engagements 20 years ago, we even heard some pastors say, if a girl from the church is pregnant and unmarried, she should either leave the church or go get an abortion.”

To challenge that mindset, Ed Bergs hopes to inaugurate a Pastors for Life group, he said, “to bring together pastors who see their responsibility as spiritual leaders to stand up against abortion.”

In the last two years, Bergs has given 200 pastors translated copies of Israel and the Shedding of Innocent Blood, a book by Be’ad Chaim co-founder Tony Sperandeo.

“I believe God will hold spiritual leaders accountable,” Ed Bergs said. “That's why we go to the churches to influence pastors and church members.”

In 2002, Shout for Life began annual pro-life volunteer trainings that continue today. The trainings cover the spiritual roots of abortion, facts on fetal development and abortion procedures, effective conversational approaches, and techniques for teaching abstinence and for counseling women with post-abortion syndrome.

“More and more Christians are catching the vision [for pro-life work],” Susan Bergs said, adding that New York’s recent passage of its abortion-until-birth law galvanized many to take action.

“At first people didn't want to believe it,” she said. “They thought it was fake news, what’s happening in New York.”

Shout for Life’s corps of trained volunteers has become increasingly valuable in an era when cheap pregnancy tests and expensive transportation have weakened the draw of their pregnancy center. Susan Bergs, the center’s director, said it is now more common to do phone counseling with women, many of whom turn to her center after researching their options on the internet.

Even as they seek better online means of reaching women in unexpected pregnancies, their vision for carrying their life-affirming message to all Hungarians—even those living in bordering nations—keeps the Bergses busy on many fronts, including public policy and culture change.

When the Hungarian government hosts its regular civil forums with pro-life leaders, Shout for Life is there.

“We always say to the government, ‘Please change the law; it’s not good that we allow abortion even up to 12 weeks,’” Ed Bergs said. “They listen, but all they say is, ‘Society is not ready to stop abortion in Hungary.’”

However, Bergs sees the re-election of the current leaders by two-thirds of voters as a sign society actually favors their strong pro-family stance. Faced with a potentially irreversible population decline, earlier this month Hungarian Prime Minister Viktor Orbân announced expanded incentives for marriage and childbearing.

In addition, the government offers grants to help fuel the work of Shout for Life Association and other pro-family organizations. However, reducing the population through abortion remains legal.

Yet while political climate change has been slow, Shout for Life has also worked to impact the medical community—specifically, the gynecologists and family nurses involved in abortions.

Hungarian law permits abortions only in hospitals, only up to 12 weeks (or later in vaguely defined “crisis” cases), and only after a woman completes four steps. First, a doctor must confirm her pregnancy. Second, she must talk over her decision with a family nurse. Third, after a three-day waiting period, she must meet with the nurse again.

Finally, a doctor must perform an ultrasound before performing the abortion. Whether or not the woman should be required to see the ultrasound image of her child is being hotly debated.

When Shout for Life began in 2001, doctors might deliver a live baby one hour and perform an abortion the next—in the very same hospital. Doctors who refused to do both could lose their jobs. But recently the Hungarian Society of Christian Doctors went so far as to petition the government to make certain hospitals abortion-free. Two hospitals in Budapest are expected to be abortion-free in the near future.

A group of family nurses met with Shout for Life volunteers for the first time ever in early spring 2017 near Lake Balaton. Describing the range of problems troubling families in the area, the nurses explained that abortion was only the tip of the iceberg for their patients. For the nurses, whose basic desire was to promote life, the meeting opened doors of understanding between them and Shout for Life.

The unique strengths of her country’s nursing program became even clearer to Susan Bergs when she joined representatives of Hungary’s pro-life movement at a UN women’s conference in the spring of 2015. There, Katalin Novák, Hungary’s Minister of State for Family and Youth Affairs and State Secretary for International Affairs, described the country’s system in detail before world leaders.

“It was great to see the State Secretary talking about Hungary and standing up for life and for family,” Susan Bergs said. “I also heard for the first time what else is happening in the world.”

In addition to the plenary sessions, she attended discussions focused on pro-life/pro-abortion questions, and spent time with the Hungarian ambassador, Katalin Bogyay, expanding her awareness of pro-life work.

Upon returning home, Bergs and two other conference attendees were offered the chance to talk about their experiences at a Christian concert in Budapest. There the three women described the urgency of being actively pro-life before a crowd of over 5,000 youth, who then prayed for the unborn.

Even more young people, from age 13 to 20, have heard from Shout for Life by stepping inside a big blue-and-green Bus 4 Life.

Primarily intended as a means to carry the gospel into towns and villages via English language teaching, sports ministry, and Christian book sales, the Bus 4 Life is an outreach of Operation Mobilization Hungary. But when the president of that organization (former board president of Shout for Life) realized Ed Bergs might find a good use for the bus in the autumn of 2017, he gave him a call.

“I was asking, ‘God what can I do with this bus?’" Ed Bergs said. “Then he called me and said, ‘Unexpectedly, the bus is now available in the spring, too.’ We shared this with a Christian nurse and she got so excited she organized the programs and made all the arrangements.”

The Bus 4 Life hit the road, launching an effort that would eventually visit 50 schools in two years, to reach over 5,000 students. 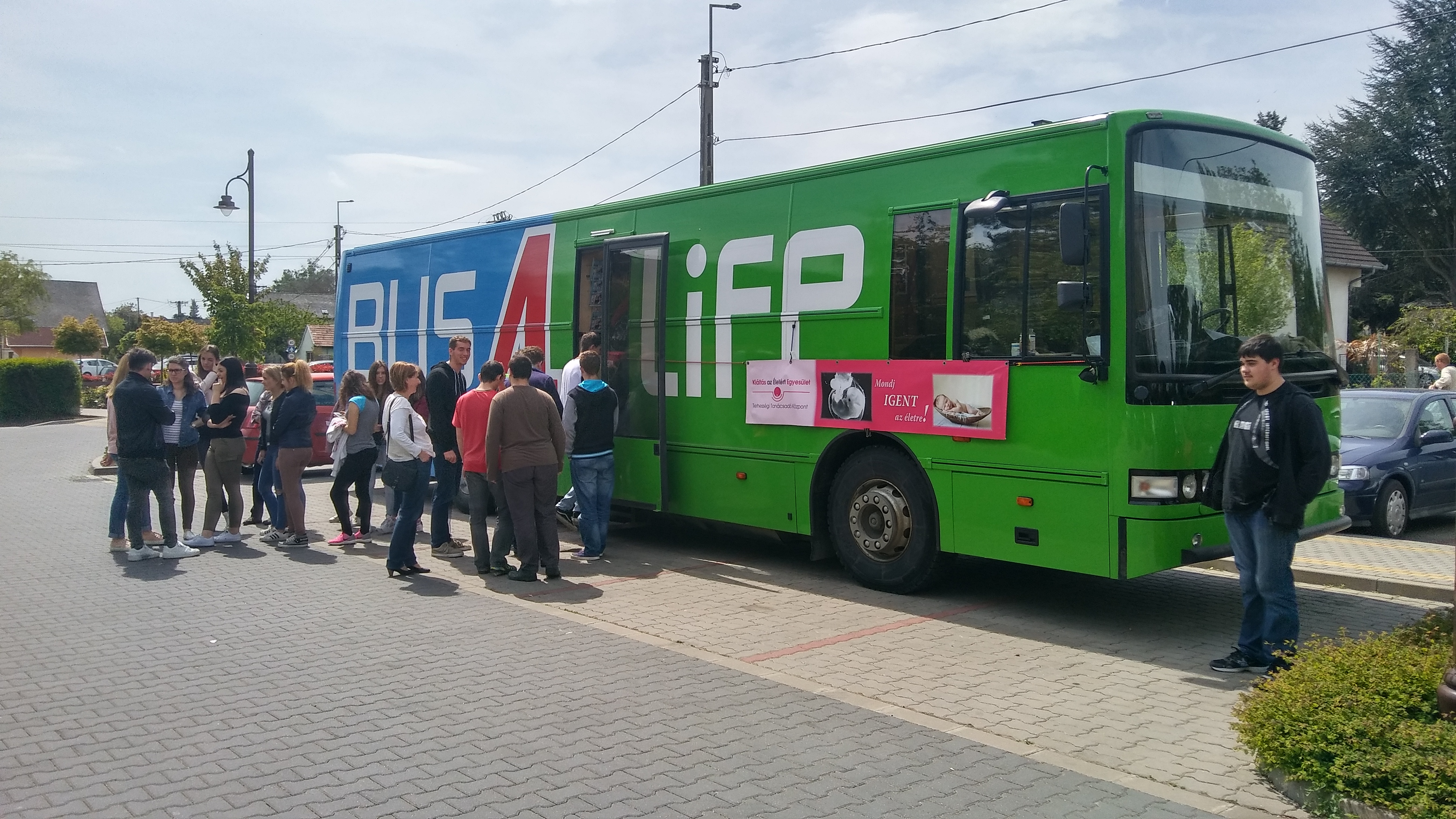 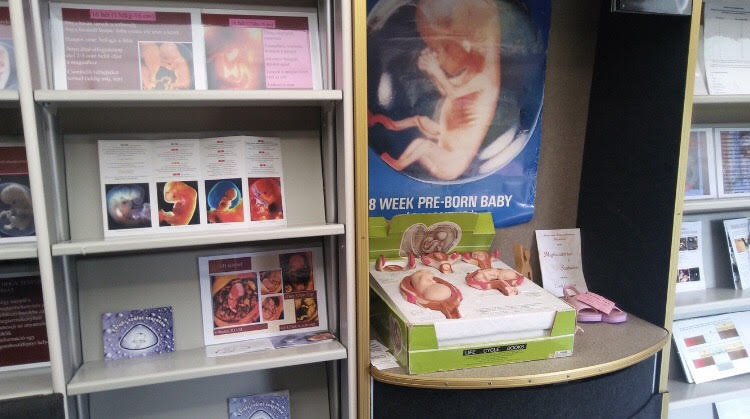 Exhibits inside the Bus 4 Life informed youth on the science of fetal development. | Photo Courtesy: Shout for Life

Inside the bus, students were greeted with congratulations on being uniquely valuable, a message many of them haven’t often heard. Then they viewed and discussed a series of brief videos: one describing fetal development, and another following a teenager’s journey through an unplanned pregnancy. A final animated video—shown only with school personnel consent—detailed abortion procedures.

Student response to the bus presentations has been highly positive, both during that first run and on subsequent trips that have included orphanages, churches, and an all-day stop in the main square of a major city.

However, one painful response came from a female student who broke down in tears after the third video.

“It turns out her father was an abortionist and she realized what that meant,” Ed Bergs said. “It was a shock.”

“We prayed a lot for that girl, because we know it is very hard for the family and for the girl to face this,” Susan Bergs said. “We say, ‘Be pro-life’ and the father is pro-abortion.”

As increasing numbers of women have faced the truth about abortion, they have come to Shout for Life seeking healing. Some are young, fresh from an internet search that revealed the cause of their negative emotions after an abortion. Others had abortions years ago, and have only recently understood the effects.

“In the past, women didn’t know what was wrong,” Susan Bergs said. “A lot of older ladies came to our post-abortion meetings saying they didn't know why they were acting strangely and their relationships were failing. We wrote out the symptoms and said, ‘If you are suffering from three to five of these, you may be suffering from post-abortion syndrome.’ So women can now understand what's happening.”

Since 2005, Susan Bergs and other volunteers have met with small groups of women, helping them find forgiveness and healing in Christ. But since abortions have affected more than just women, Shout for Life connected with Sonja and Chris Horswell of Save One Europe for abortion recovery books designed to help all members of a family work through the fallout of abortion together. 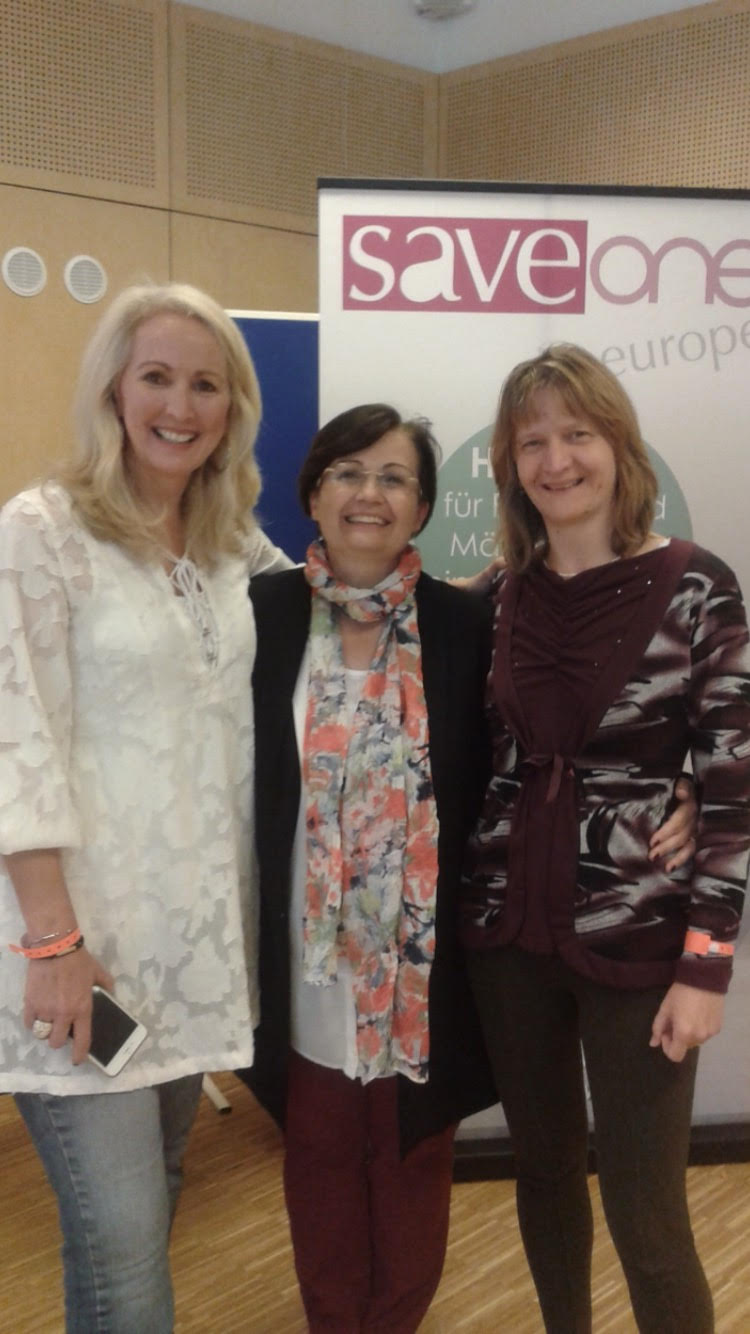 “The Hungarian population is less than ten million. Almost surely half of Hungary is affected by abortion.”

Tweet This: “The Hungarian population is less than ten million. Almost surely half of Hungary is affected by abortion.” @KingleWrites #prolife

Today, through post-abortion and pregnancy options counseling, prevention education, engagement with medical and government officials, and ongoing prayer, the Bergses hope Shout for Life Association will help prepare a society that is ready to end abortion in Hungary.