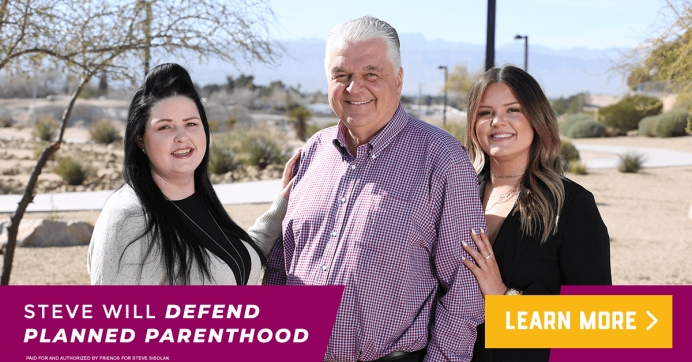 Nevada gubernatorial candidate Steve Sisolak's idea of "beyond the pale" isn't quite what you'd expect. Photo from campaign website.

Pro-Life Centers are "Beyond the Pale"? This Nevada Gov. Hopeful Thinks So.

If there’s any place where the phrase “beyond the pale” should carry some weight, it’d be Las Vegas—a city built on the very idea that there really is no such thing as “beyond the pale.”

But, to one self-styled “moderate” Democrat candidate for the governor’s race in Nevada, it’s life-saving groups like First Choice Pregnancy Services that should be the one thing causing Las Vegas to blush.

As reported recently by the Las Vegas Review-Journal, Democratic candidate Steve Sisolak took to Twitter to express his shock and outrage after Republican candidate Adam Laxalt visited First Choice, which is located just up the street from one of several abortion businesses that abort babies well beyond 24 weeks.

To Sisolak, who’s also battling head-to-head with an EMILY’s List-endorsed woman for the Democratic ticket, Laxalt’s visit to the center—which has saved over 27,000 lives from abortion—was nothing short of anathema.

Tweet This: @SteveSisolak, you keep using that phrase, "beyond the pale"... I do not think you know what it means. #prolife @AdamLaxalt @VictorJoecks

“@AdamLaxalt’s anti-choice views are beyond the pale,” Sisolak, a professing  Catholic, said. “If his outspoken opposition to @PPFA isn’t enough, his embrace of this shameful group is enough to demonstrate where he stands. As governor, I would protect access to women's healthcare and a woman’s right to choose.” 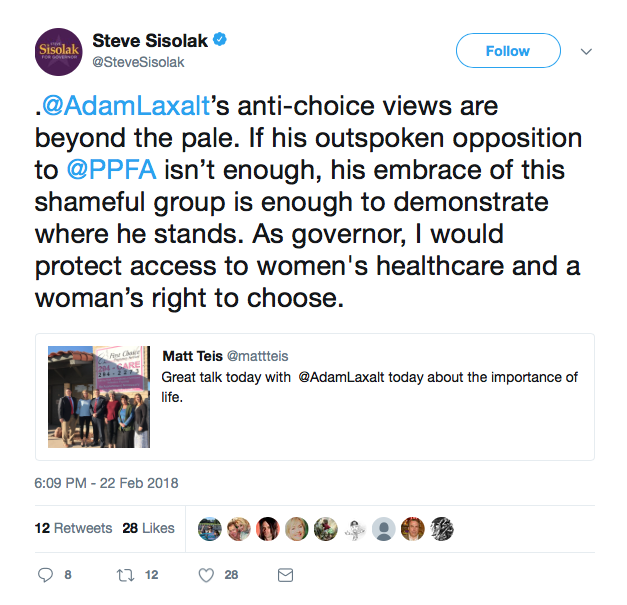 In his attempt to court the favor of the far-Left, Sisolak has made overtures to Planned Parenthood by hiring on a former Hilary Clinton campaign staffer with ties to the abortion giant, as well as EMILY’s List and others.

Writing at the Review-Journal, Victor Joecks says the blind opposition to pregnancy help centers from Sisolak and the rest of the Democratic Party is a clear signal they care far more about the intersests of abortion businesses than “choice” or the dignity of women.

Neither Sisolak nor his campaign responded to calls for comments.

Silly me. I thought “women’s freedom to make their own health care decisions” included the freedom to choose what clinic to go to. Instead, you have Democrats acting as if women aren’t capable of processing information and making up their own minds and must be protected from the horrors of free ultrasounds.

Remember this the next time Democrats claim the abortion debate is about a women’s right to choose.

Click here to read the article in its entirety.