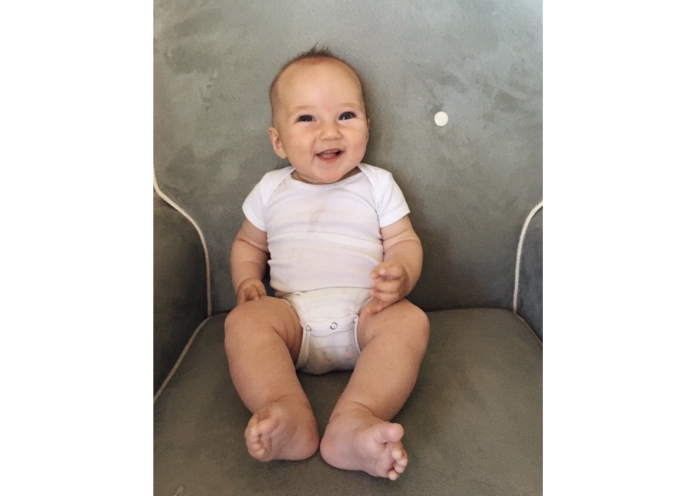 (PLAM) On June 21, 2019, at 6.5 weeks pregnant, I was rushed to the emergency room at United Hospital for emergency surgery for an ectopic pregnancy. I had experienced some bleeding and mild cramping the day before, leading me to have an ultrasound performed to see if the baby was okay or if I was experiencing an unfortunate miscarriage.

I cried tears of joy when the ultrasound technician showed me my sweet baby’s heartbeat.

I was so relieved…until I received the radiologist’s report minutes later. I was told, “The baby is unfortunately not growing in your uterus, but between your uterus and fallopian tube. There is no chance of survival. Your life is at risk, too, in case of rupture. We are recommending emergency surgery tonight.”

I don’t think I’ve ever cried so hard in my life. Here, I had just seen my sweet baby’s little heart beating after I thought I was losing him.  Now, I was told that al-though my baby was okay for now, he would no longer be alive at the end of the night after this emergency procedure.

Once I got to the emergency room and was all checked in, I met with the surgeon. She stated that because of the baby’s location, it was also likely that they would have to remove a significant portion of my uterus, fallopian tube, and ovary. She said it was unlikely that I would be able to deliver a baby naturally again.

Heartbroken in so many ways, my whole family and I began praying for a miracle.

The nurses continued preparing me for surgery, drawing significant amounts of blood in case I would need a blood transfusion after surgery. I was told it was highly likely considering the type of procedure I was about to undergo.

When the surgeon came back in, she said to the nurse that she was able to see the written report from my ultrasound earlier that day, but due to a glitch in the computer system, she was unable to pull up the images. She said she would proceed with the surgery anyway.

This is when a glimmer of hope rose up in me as I thought to ask for a second opinion. I explained to the surgeon that I did not feel comfortable with her operating on me if she was not able to see images of what she would be operating on. I also wanted a second ultrasound to confirm that the surgery was, in fact, necessary.

She was angry that I was questioning her, but eventually she gave in and ordered a second ultrasound.

What happened next was nothing short of a miracle. My emergency room doctor came in with tears in her eyes and a smile on her face. She said, “Baby is growing in the right location. There’s no need for surgery today. You can go home now.”

Today Isaac is a healthy 6-month-old boy. His life is truly a miracle. I tear up when I think of the day I almost lost him. This reminds me of the importance of getting a second opinion whenever an issue during pregnancy is found. It could be life-saving.

Tweet This: Today Isaac is a healthy boy whose life is truly a miracle. Getting a second opinion for issues found during pregnancy could be life-saving.