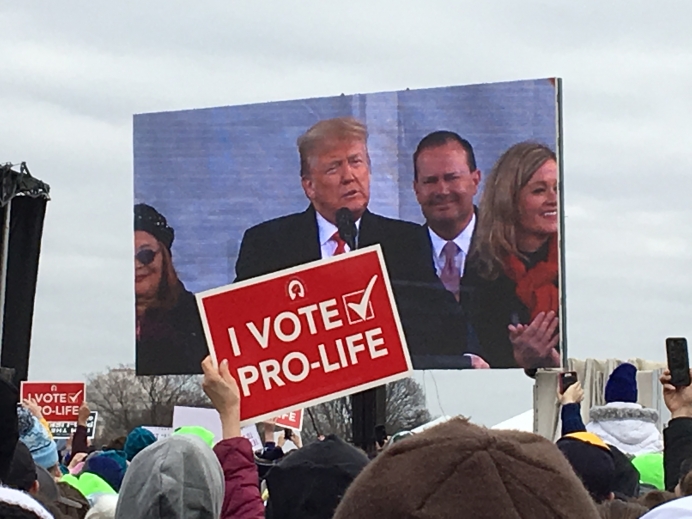 Just like in the last presidential election, my social media feed shows a few “conservative” columnists, inside-the-beltway analysts and political insiders declaring, “While I’m pro-life, I can’t in good conscience vote for . . .”

You know the rest. This small but vocal group insists our country can only be saved by ousting the current occupant of the White House. I won’t name their names—they are easily found online, and I’d probably leave out a few if I put forth a list.

I’ve followed some of their careers, quoted their columns. I continue to keep up with their thoughts because I still wish to know their opinions.

I won’t argue about whether they are truly “pro-life,” should they decide to sit out this election or vote for the Democrat nominee. It’s not my job.

And I’ll be the first to say that politics is not the biggest key to making abortion unthinkable in this country. The public square is important. Those in elected office who stand for life can help limit abortion.

But make no mistake, it’s the pregnancy help community which can end this practice. When we truly become the first choice for those facing unexpected pregnancies, the thought of ending a pregnancy will diminish so much, it will be nearly impossible for any Planned Parenthood or similar businesses to stay open.

Tweet This: It’s the pregnancy help community which can end this practice- When we truly become the first choice for those facing unexpected pregnancies

So no, I don’t hate these people or see this election as the end-all, be-all for the life-affirming community. We’ve survived presidents who opposed our work. If we must, we will do so again.

Going back four years from this week, I’ll be honest enough to say the Republican nominee was hardly my first choice. About sixteen candidates ran for the GOP nomination in 2016. The nominee was somewhere between #12 and #16 on my list.

I didn’t believe much of his pro-life rhetoric. He had suddenly switched sides and it seemed all too convenient. Just being real, when I went into the voting booth, I cast a vote against a candidate who declared stark opposition to everything we work so hard for. I voted for “The Donald,” but didn’t think he would be much help. I didn’t think he would win, either.

Even more surprising was what happened next. This president actually—stunningly—followed through on his promise to appoint conservative justices to the Supreme Court. While the jury is still out on Justice Kavanaugh, let’s go back to President Trump’s first appointment, Neil Gorsuch.

Let’s set the stage for what Justice Gorsuch means to our work. If you remember, California passed a law forcing pregnancy centers to provide information and refer clients to abortion centers. Attorney General Xavier Becerra enforced the law with a vengeance, a direct violation of free speech. The National Institute of Family and Life Advocates sued Becerra, leading to the famous NIFLA v. Becerra case.

The case reached the Supreme Court, with the future of pregnancy centers and our ability to function at risk. The decision? In a 5-4 vote, we won. Neil Gorsuch, Trump nominee, was the swing vote.

For a moment, imagine what life would be like had a Democrat nominee had been in the Gorsuch seat. We don’t have to imagine, because in the NIFLA case, every Democratic appointment voted against free speech and against pregnancy centers.

If this law was upheld, several other states were ready to go with similar laws. To be frank, one vote—the other way—would have blocked hundreds of pregnancy help organizations from fulfilling our missions. In truth, all of us could have been at risk if the idea made its way to Washington D.C. and congress—with Hillary Clinton in the White House.

This is how monumental the NIFLA v. Becerra case was.

One vote saved our work in the United States. That of Neil Gorsuch. Appointed by a president who wasn’t even pro-life until just a few years ago.

Tweet This: "One vote saved our work in the U.S. That of Neil Gorsuch. Appointed by a president who wasn’t even pro-life until just a few years ago."

Now we’re four years hence and those who “conservative voices” who opposed this president on various grounds back then are back to tell us the better choice is a career politician of 47 years who promises to give us Supreme Court justices who we know will never consider the life of a small child to be valuable.

The “I’m pro-life, but . . .” bunch says there are other considerations.

I’m sure there are. But which of these considerations means more than the lives of thousands upon thousands of small children who owe their very lives to our work? Does an unwise tweet from the president mean more? Is that it? Is it that he’s not polished enough? That he speaks sometimes before thinking things through?

I ask the “I’m pro-life, but . . .” pundits to look into the eyes of children who are one or two years old today because a pregnancy help center reached out to their moms and helped. Look into those eyes and say, “Your value isn’t quite as important as what Trump said about . . .”

I don’t “hate” the “I’m pro-life, but . . .” analysts. Yet, I respectfully disagree with an opinion which would throw all of us—2750 pregnancy help ministries across the country—under the proverbial bus and put the lives of children waiting to be born in danger.

I have no idea what the future holds, so I won’t tell anyone that a vote for this president’s re-election will lead to the defunding Planned Parenthood or the overturning of Roe. I do know however, that the Democratic nominee is making it clear that if he wins, Planned Parenthood wins, Roe wins, and we need to know pregnancy help ministries would be in big trouble.

I know something else, too: This current president—even with his flaws—stood for us when it mattered most.

Four years ago I struggled to vote for this president. This year, I’m willing to walk over hot coals, crawl over broken glass and—if need be--force my way through a riotous mob to vote for him again.

Editor's note: Viewpoints expressed by Pregnancy Help News contributors are their own and should not be read as representative of the news organization. Neither Pregnancy Help News nor Heartbeat International make endorsements of political candidates. Both Heartbeat and PHN encourage responsible citizenship and stewardship of voting decisions.