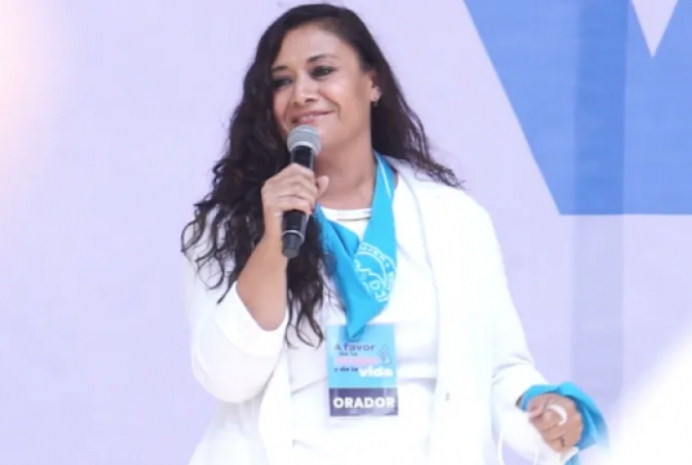 Hispanic pro-life advocate Mayra Rodriguez speaks to a crowd of over 300,000 during Mexico’s “March for Women and Life,” on Oct. 3 2021 David Ramos/CNA

(CNA) Mayra Rodríguez worked for Planned Parenthood for 17 years and was in charge of three clinics.

In 2016, the abortion provider recognized her as employee of the year.

Shortly thereafter she would become one of the most outspoken pro-life advocates in the Hispanic community.

During her tenure with Planned Parenthood, Rodríguez said she witnessed falsified abortion records, serious complications from abortions, and experienced intimidation based upon false accusations threatening her immigration status after Rodríguez indicated she would report a doctor at the clinic she directed who botched an abortion on a 19-year-old girl and then falsified the report.

In an exclusive interview with CNA’s sister news agency, ACI Prensa, Rodríguez recalled that the doctor "was referring to the head of a 14-week-old baby as if it was garbage, as if it were gauze or any instrument he was using."

The doctor had left the baby's head inside the womb after performing the abortion and then placed an intrauterine contraceptive device inside the girl before he discovered his mistake.

In the end, the Planned Parenthood worker "did not want to document it, and falsified the record," causing the now pro-life leader to challenge the doctor’s actions with her supervisor.

“[N]o more, I’m not going with this anymore,” she recalled saying, warning the supervisor that she would report the doctor.

Planned Parenthood responded by instead accusing Rodríguez of having narcotics in her office and pressured authorities to deport her from the United States.

"What followed was that they fired me," she recalled.

After years of legal battles, Mayra Rodríguez prevailed in 2019 in her wrongful termination lawsuit against Planned Parenthood and was awarded $3 million.

With her experience working in the shadow of the largest abortion company in the world, Rodríguez warns that while those who profit from these practices say that “it is easy, it is the best solution, when in reality it brings many [harmful] consequences" to women.

“Actually, abortion does not guarantee absolutely anything. No, it leaves (women) destroyed for life, and with scars on the uterus. And perhaps they do not lose their lives, but they do lose many more things, such as peace, emotional and mental health. Psychologically they are undone," she said.

"That is not something that the pro-life movement invented or that some psychologists invent, it is the reality of women who have aborted and who today are sorry," she said.

Tweet This: Abortion leaves women destroyed for life; they lose peace, emotional and mental health. Psychologically they are undone.

Originally, Rodríguez was hired in a clinic that did not perform abortions, a fact she used to justify her line of work. And Planned Parenthood did not care that she was in the United States on a tourist visa rather than a work visa.

Faced with the possibility of refusing to work in a place that directly performed abortions "they told me, 'If you don't accept the abortion clinic, very soon we will close the clinic that you have in north Phoenix and we do not guarantee that there will be work for you.’”

Eventually, however, when she was pushed to a clinic that did perform abortions, she said, she began to see that complications were not reported correctly, if at all.

"I began to see abortionists falsifying the records of what was happening in the room," she added.

"I began to see that it was a business," she said, and that "abortion was what mattered to them and abortion was their priority."

This realization, when combined with the pressures she experienced as a whistleblower, lead her to rethink the abortion industry and what abortion does to women.

Rodríguez, a Mexican national, said she is hopeful that Roe v. Wade, the 1973 U.S. Supreme Court decision that legalized abortion nationwide, can be overturned by the upcoming Dobbs v. Jackson Women's Health Organization case pertaining to Mississippi's ban on abortion after 15 weeks of pregnancy because legal abortion “has never been good for Hispanic women."

The former Planned Parenthood Employee of the Year noted, "once you give women a true option, they will choose not to have an abortion."