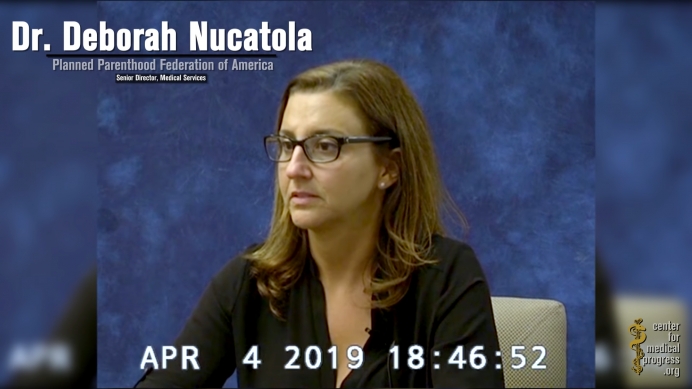 The video exposes the testimonies of several top Planned Parenthood officials and a human tissue procurement company leader during a 2019 sworn legal deposition.

In her sworn testimony, Larton admitted that she has seen aborted babies’ hearts “beating independently” after they are born. She also confirmed that some aborted babies’ bodies are fully intact. 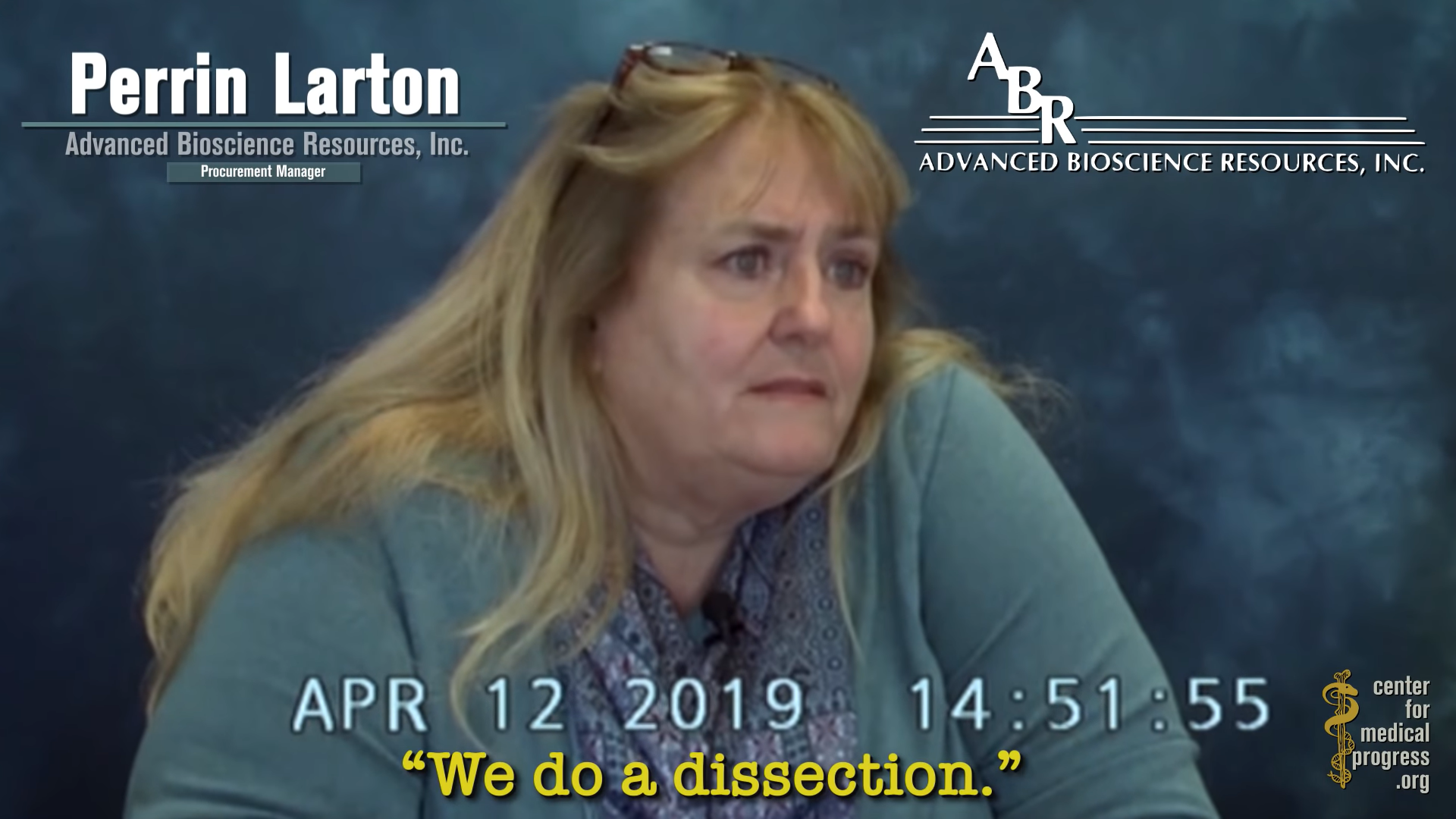 Larton explained that most aborted babies come out of the womb in pieces, but sometimes ABR sees fully intact bodies. Asked about those situations, Larton replied, “They just, sometimes they fall out” of the mother when she delivers the baby in the abortion operating room. When questioned about how often that occurs, she replied, “Once every couple months.”

Asked what happens next, Larton said an ABR staffer will “do a dissection” on the intact aborted baby “to get the tissues that the researchers have requested.” When asked if the babies that just “fall out” have a heartbeat, Larton said, “It would depend,” because “I can see hearts that are not in an intact P.O.C. [product of conception, meaning aborted baby] that are beating independently.”

Other testimony in the video came from Dr. Deborah Nucatola, the former senior director of medical services for Planned Parenthood nationally. Nucatola was caught in the first Center for Medical Progress video eating salad and sipping wine while talking about how she “crushes” unborn babies’ heads to better harvest their body parts.

In the new video, Nucatola was asked if she had “ever had a patient deliver in the operating room a non-viable fetus.”

Nucatola then was pressed repeatedly to define “non-viable.” At first, she defined it as “a fetus that’s not capable of survival.” But when asked how to determine if a baby is viable, she responded, “It depends on where you work.” Questioned again, Nucatola said viability partially depends on the baby’s gestational age, weight and health. However, she also included “the availability of interventions” in her criteria.

This raises serious questions about if Planned Parenthood is allowing babies who would be considered viable in a hospital to die because the abortion facility does not have “available interventions” such as medical equipment or staff to care for the baby and arrange for his/her transportation to a hospital.

Tweet This: This raises serious questions whether Planned Parenthood is allowing babies who would be considered viable in a hospital to die ...

According to the Center for Medical Progress, Nucatola used to be in charge of setting the national Medical Standards & Guidelines for all Planned Parenthoods. She also aborted unborn babies at the Los Angeles Planned Parenthood, which harvests aborted baby body parts for Novogenix Laboratories.

A third testimony came from Jon Dunn, CEO of Planned Parenthood of Orange & San Bernardino Counties in California. His affiliate used to work with the fetal tissue companies DaVinci Biosciences and DV Biologics, which were shut down in 2017 after the Orange County District Attorney accused them of illegally selling aborted baby body parts. The companies agreed to close permanently and pay $8 million in a settlement.

Dunn said he knows of one baby was born alive at one of his affiliate’s abortion facilities.

“I know they kept it warm and comfortable for the very brief period that it was alive. I don’t think there was even time to call 911,” Dunn said. Later, he added: “This is something that every obstetrician/gynecologist deals with on rare occasion. … It is their medical judgment what to do in that circumstance.”

“How long will public authorities permit Planned Parenthood and their associates to sell living children inside and outside the womb and then kill them through organ harvesting?” Daleiden asked. “The [Department of Justice] has vigorously prosecuted the sale of eagle body parts. Surely selling human body parts after cutting them out of an infant with a beating heart is at least as grave of a crime.”

For years now, Daleiden and the Center for Medical Progress have been uncovering shocking details about Planned Parenthood’s abortion practices, including the harvesting of aborted baby body parts for research.

Planned Parenthood repeatedly has denied all allegations of wrong-doing, and many news outlets now parrot its talking points that the initial Center for Medical Progress videos were deceptively edited or debunked. An independent forensics investigation verified that the videos were authentic.

Meanwhile, Daleiden and other CMP investigators are being prosecuted for their work.

The expose videos catching Planned Parenthood officials selling the body parts of aborted babies have shocked the nation. Here is a list of all 14:

In the first video: Dr. Deborah Nucatola of Planned Parenthood commented on baby-crushing: “We’ve been very good at getting heart, lung, liver, because we know that, so I’m not gonna crush that part, I’m gonna basically crush below, I’m gonna crush above, and I’m gonna see if I can get it all intact.”

In the second video: Planned Parenthood’s Dr. Mary Gatter joked, “I want a Lamborghini” as she negotiated the best price for baby parts.

In the third video: Holly O’Donnell, a former Stem Express employee who worked inside a Planned Parenthood clinic, detailed first-hand the unspeakable atrocities and how she fainted in horror over handling baby legs.

In the fourth video: Planned Parenthood’s Dr. Savita Ginde stated, “We don’t want to do just a flat-fee (per baby) of like, $200. A per-item thing works a little better, just because we can see how much we can get out of it.” She also laughed while looking at a plate of fetal kidneys that were “good to go.”

In the sixth video: Holly O’Donnell described technicians taking fetal parts without patient consent: “There were times when they would just take what they wanted. And these mothers don’t know. And there’s no way they would know.”

In the seventh and perhaps most disturbing video: Holly O’Donnell described the harvesting, or “procurement,” of organs from a nearly intact late-term fetus aborted at Planned Parenthood Mar Monte’s Alameda clinic in San Jose, CA. “‘You want to see something kind of cool,’” O’Donnell says her supervisor asked her. “And she just taps the heart, and it starts beating. And I’m sitting here and I’m looking at this fetus, and its heart is beating, and I don’t know what to think.”

The ninth video: catches a Planned Parenthood medical director discussing how the abortion company sells fully intact aborted babies — including one who “just fell out” of the womb.

The 10th video: catches the nation’s biggest abortion business selling specific body parts — including the heart, eyes and “gonads” of unborn babies. The video also shows the shocking ways in which Planned Parenthood officials admit that they are breaking federal law by selling aborted baby body parts for profit.

Unreleased Videos: Unreleased videos from CMP show Deb Vanderhei of Planned Parenthood caught on tape talking about how Planned Parenthood abortion business affiliates may “want to increase revenue [from selling baby parts] but we can’t stop them…” Another video has a woman talking about the “financial incentives” of selling aborted baby body parts.

The 12th video in the series shows new footage of Jennefer Russo, medical director at Planned Parenthood in Orange County, California, describing to undercover investigators how her abortion business tries to harvest intact aborted babies’ bodies for a local for-profit biotech company and changes the abortion procedure to do so.

Editor's note - This article was published by LifeNews.com and is reprinted with permission.