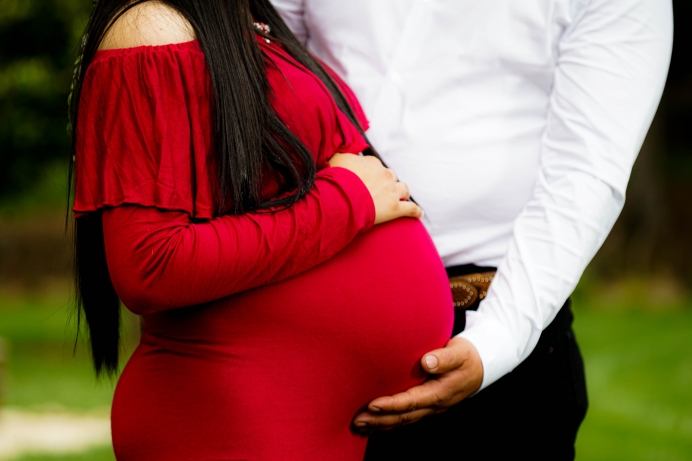 A Virginia pregnancy center saw an increase in calls and visits from women in need because of collaborated efforts between the center, the local 40 Days for Life campaign, a pro-life material ministry and Heartbeat International.

The new leader for Richmond’s 40 Days for Life campaign had contacted Warburton inquiring about how to connect women they encountered during the campaign with the pregnancy help center.

Warburton investigated and contacted Heartbeat International, the first network of pro-life pregnancy resource centers founded in 1971 in the U.S. and now the most expansive network in the world..

“If we could get a sign with Heartbeat International on it and their Option Line number, they would refer women to the pregnancy center in community,” she said. “The Heartbeat team is such an amazing group of people!”

Option Line is Heartbeat’s 24/7 bi-lingual pro-life contact center that provides support for women and families in need, connecting them to their local pregnancy help center.

Warburton learned that signs were available through Heritage House, one of the largest providers of pro-life material in the world. Warburton ordered some and shared them with the local 40 Days for Life team.

40 Days for Life has gathered people across the world twice a year starting 13 years ago to pray for women seeking abortions and for the abortion workers. The pro-life vigils have resulted in thousands of lives saved from abortion, hundreds of abortion workers leaving the business and abortion facilities closing their doors.

Within a few days of having those placards held by people praying with 40 Days for Life near the Richmond abortion facilities, calls came into Pregnancy Resource Center of Metro Richmond.

“The first three days they were there to pray, we got six calls. Five of the women came in. I was so thrilled!” said Warburton. 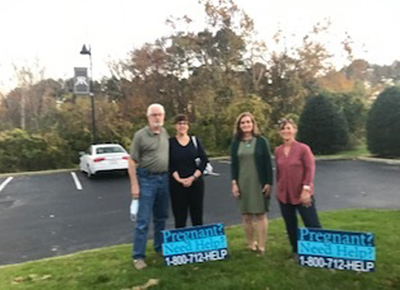 She views the signs as effective and hopes they are used in the spring 2021 campaign. She also hopes to see them in the community.

“I continue to think about how to get these signs out into the community,” Warburton said. “I know that when a woman calls and she talks to someone on the Option Line, they are going to encourage her to get to a pregnancy center where she’s going to get help.”

Tweet This: I know when a woman calls & talks to someone at Option Line, they'll encourage her to get to a pregnancy center where she’ll get help

“I’m hopeful we can get some more signs and we can maybe just light up the whole community with these signs,” she continued. “I think women who are in unplanned pregnancies know they need help – they just often don’t know where to find it.”

Earlier this year, Virginia’s governor signed laws loosening abortion restrictions in the state. Warburton sees these changes as harmful to women. Some of those changes include shortening the waiting period for an abortion, no longer requiring an ultrasound before and abortion, and allowing nurse practitioners to conduct abortions.

“This is not women’s reproductive health care, when we’re lowering standards of care,” Warburton said.

“Here we have a woman who is very torn, many times has overwhelming external pressures,” she said, “often coerced into having an abortion.”

“With these new laws that went into effect in July,” Warburton added, “and everything we see on the ground level as we love and serve women each and every day, listening to their stories, looking for ways we can help, support, and encourage, and provide good information for them … there is a sense of urgency every day.”

Warburton oversees two centers in Richmond, including one which opened within the past year that serves Hispanic and immigrant populations. The original location already served about 200 women, locally and from other areas of the state, so Warburton and her team decided to reach even more with a second location.

“We’re seeing a large Hispanic population and immigrant population in our South Richmond City office,” she said. “We are thankful to be reaching them because they are very much another underserved community that really needs tremendous help. Sex trafficking and drug trafficking are very high, and we are grateful to be there.”

Serving with love and in partnership

Pregnancy Resource Center of Metro Richmond started more than 35 years ago; Warburton has led the organization for 16 years.

There are three abortion facilities in the city and the abortion rate in this urban area “is very high,” she said.

The pregnancy center fights for each life by offering medical services to women need, including ultrasound and STD testing. There is also an “after-abortion care” and a fathering program, she said.

“We want to love and serve people well,” Warburton said. “We want to speak the truth in love, and minister without manipulation.”

Working in partnership with 40 Days for Life and others helps give women that hope and help. A new billboard campaign called “Informed Women” is planned for the New Year.

“We feel women really need to know,” Warburton said, referring to the new Virginia laws that went into effect. “I think the women in our community also need to know. They don’t often know when things are being taken away.”

Online marketing and radio ads also play into the center’s outreach, and as she looks for more places to display the Option Line signs in her community, Warburton anticipates the potential of further collaboration endeavors.

“I don’t know all that God wants us to do,” she said, “but I think we really have to find ways to work together.”