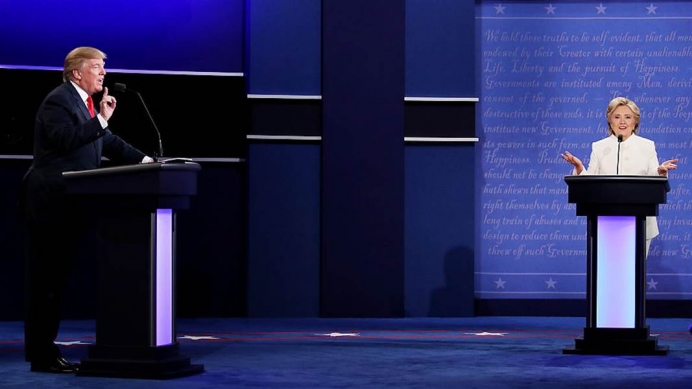 How to Election-Proof the Culture of Life

“Some trust in chariots and some in horses, but we trust in the name of the LORD our God. They collapse and fall, but we rise and stand upright.” Psalm 20:7-8

On the debate stage stood two individuals: One, a rabid advocate of taxpayer-funded abortion supply even up to the moment of birth, the other a candidate who has spent much of his adult life stoking the very fires of demand that keeps the abortion industry raging.

Even as the latter, Republican nominee Donald J. Trump, landed a handful of strong blows to Democratic nominee Hillary Clinton for her unqualified allegiance to abortion—any time, any place, any restriction anathema—in Wednesday night’s third and final presidential debate, the exchange itself was limited to late-term abortions that account for just one percent of abortions in the U.S. each year.

Without downplaying the significance of the conversation—it was incredibly revealing to hear Clinton resort to the evidence-free trope that most late-term abortions are for life-saving medical reasons (they aren’t)—or the devastating reality of 10-15,000 babies aborted at 20 weeks and beyond every year, the main reason any pro-lifer opposes abortion was once again left unsaid.

That’s why we offer a better way forward in an unexpected pregnancy. Not because we have some hidden political agenda, but because we have a clear and overt call from our Creator to honor, defend and celebrate life.

Tweet This: We have no hidden political agenda, just a clear call to defend & celebrate life. #prolife

That’s what the psalmist is after in Psalm 82:3-4, when he calls upon God’s rescued people to, “Give justice to the weak and the fatherless; maintain the right of the afflicted and the destitute. Rescue the weak and the needy; deliver them from the hand of the wicked."

Justice for the weak and fatherless, the afflicted and destitute. An outstretched arm to haul weak and needy souls into the lifeboat of safety. Deliverance from the death-dealing arm of the wicked.

That is a call that transcends any election, affecting the world in a way no vote ever can or will. It’s a call to save lives, and it’s one to which the faithful church responds generation after generation. It’s why so many hospitals and humanitarian agencies still bear a Christian name, and it’s why gospel-believing Christians in every corner of the globe propel today’s pregnancy help community.

It’s also what makes our aims election-proof. We don’t aim to win an election—although, that would certainly be welcome—we aim to win hearts for the sake of the invisible Kingdom of our God who took on flesh, starting out like we all do as an unborn infant, and dwelling among us.

Supply and Demand in the Fight Against Abortion

My hero in the pregnancy help community, long-time president and now board chairman of Heartbeat International Peggy Hartshorn, Ph.D., was jolted into action Jan. 22, 1973, the day Roe v. Wade made abortion on-demand legal in all 50 states.

Looking to respond in a constructive way, Peggy immediately got involved with a handful of legislative and political activist groups seeking to halt American abortion in its tracks. Early on, she says, the prevailing pro-life assumption was that a Human Life Amendment to the Constitution could reverse Roe in a matter of just a couple of years.

North of 330 versions of a Human Life Amendment have been proposed to Congress since the early 1970s, with the only version ever to reach the floor of the Senate falling 18 votes short of passage in 1983.

Every one of those versions holds value for the pro-life community, as does any legislation seeking to check a vastly unregulated cartel that poses a real threat to any woman entering an abortion clinic—not to mention her unborn child. This is the arm of the pro-life movement that seeks to curb the “supply” side of abortion with commonsense regulations, such as those overturned in the Supreme Court’s 2016 Whole Woman’s Health v. Hellerstedt decision.

Even if these legislative efforts were to accomplish nothing more than to keep abortion in the national conversation, they’d be worthwhile. Of course, they do accomplish much more.

The Texas law overturned by Whole Women’s Health, for example, is responsible for saving several thousand lives in just a few years’ time, while the 1976 Hyde Amendment—which Clinton has pledged to repeal—is responsible for an estimated 2 million Americans now living who would otherwise have been killed by abortion.

But, for Peggy and her husband, Mike, a new avenue emerged in their personal approach to creating a culture of life in 1975, when they took in a young mother who was forced out of her home because she refused to abort her child.

Tweet This: @HeartbeatIntl addresses "demand" side of #abortion equation. #prolife

That started a personal shift from addressing the “supply” side of abortion to focusing on the “demand” end of the equation. What the Hartshorns found was that the best alternative to abortion is always another person. Someone who will put her own priorities on hold to listen and care for a woman who feels so alone and hopeless that abortion feels like her only choice.

Within just a few years, the Hartshorns had joined hands with a growing movement of life-saving nonprofits that had sprung up as states began to legalize abortion in the years leading up to Roe. In 1981, the couple helped launch a pregnancy help center and hotline that now serves in six locations throughout central Ohio, with Peggy eventually taking the reins of Heartbeat International, a worldwide network of 2,000 strong that includes a 24-7, 365 national pregnancy helpline, Option Line.

Rise, Stand Upright and Save Lives

Why bring up Peggy’s story in light of the final debate and upcoming election? Because she’s one of thousands who have responded to the epidemic of abortion with compassionate, life changing, and election-proof help over the past 50 years of abortion in the U.S. and beyond.

She and so many like her are prime examples of the wisdom of trusting “in the name of the LORD our God.” No matter what happens on Election Day, as the psalmist says, we will “rise and stand upright,” knowing we’ll have lives to rescue and families to rebuild come Nov. 9.

No election can change our calling or veto the awesome power of the King of Kings. In an election year like this one, that truth bears some repeating.