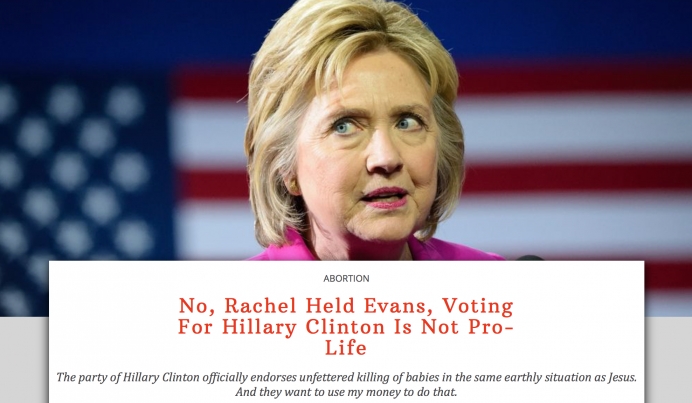 No Child's Poverty is Worse than Death, It's Always an Opportunity to Serve

Note: The following is an excerpt from an article run in full at The Federalist, by Pregnancy Help News editor Jay Hobbs. Click here to read the article.

As you might expect, a lengthy essay dealing with both politics and religion that references neither politics nor religion has its fair share of shortcomings. Perhaps the most striking is blogger Rachel Held Evans’ muddying of the waters on what pro-lifers mean when we call ourselves “pro-life” in a recent post, "So you’re thinking of voting for a pro-choice candidate…”

Held Evans fancies her definition of “pro-life” as more enlightened and expansive than most. A “pro-life” approach must take into account affordable health care, poverty alleviation, racial reconciliation, etc., she asserts. To be sure, these are laudable, even “pro-life” goals, even if we disagree on the extent to which the government is capable of achieving them.

But a pro-life conviction comes from recognizing the inherent value and dignity of every human life. That is why we oppose abortion in all cases. We can argue a bigger tent, but never at the expense of that central conviction. Here’s where Held Evans gets in the weeds, and it’s where she stays. In trying to expand the definition of “pro-life,” she’s doing the very opposite, redefining the term to exclude the one issue on which we “pro-lifers” unanimously agree.

Take, for instance, the following quote:

Sometimes I think it’s easier for us to talk about ‘saving millions of babies’ than it is to work at creating a culture that can sustainably welcome those babies as they grow into children and adults. Speaking in abstract terms about blank, amorphous ‘innocent lives’ keeps us from confronting the reality that if most of these children are born at or near the poverty line, then the lives we are saving are more likely to be troubled ones, and if nothing changes, those lives will get caught in vicious cycles powered by poverty and systemic racism. (emphasis original)

Now, I know a few children, babies, and adults who are at or below the poverty line. Not one of them is “blank” or “amorphous.” These are real people with names, birthdays, retinas, and elbows. Every one of them. More to the point, every single one bears the very image of God—from womb to tomb.

Not one of them is better off dead, even if they are “caught in vicious cycles powered by poverty and systemic racism.” Like it or not, that’s the argument—better to be dead than poor or mistreated.

The Poor You Will Always Have with You

Remember Mary anointing Jesus at Bethany in John 12? It’s a beautiful scene, where the heartfelt love of a friend overflows in gratitude as Mary breaks an expensive jar of perfume and anoints Jesus’ feet with the sweet-smelling stuff. It’s a moving story. Captivating, really. That is, until Judas raises the very point Held Evans does in her essay: What about the poor?

In Held Evans’ world, being poor is worse than being dead.

Turns out Judas is asking about the poor, not because he cares so much about them, “but because he was a thief.” Judas cares nothing for the “amorphous” poor. What he’s after is the illusion that he cares. John’s not buying it, and neither is Jesus: “Jesus said, ‘Leave her alone, so that she may keep it for the day of my burial. For the poor you will always have with you, but you do not always have me’” (John 12:7-8, emphasis added).

Now, before we rush to explain this statement away, it’s helpful to remember that Jesus was literally homeless when he said it. Jesus knew what poverty was all about. He knew the struggles of growing up in a non-traditional household that started with unwed pregnancy. Foxes and birds had better places to dwell than the Son of Man—who had no place to lay his head.

Tweet This: Poverty is an opportunity for Christian service, not a "problem" to solve with #abortion. #prolife

Poverty means opportunity for selfless Christian service, and that’s been the track record of the church bought by our selfless Christ—a man without a pillow. That’s why the church is constantly working to meet the needs of poor people in every community. That’s why we’ve been building hospitals, orphanages, adoption agencies, food pantries, clothing closets, pregnancy help centers, and maternity homes for 2,000 years.

Sadly, in our enlightened times, poverty is worse than death. In Held Evans’ world, being poor is worse than being dead. Suffice it to say, that’s not a biblical principle.

Note: The above is an excerpt from an article run in full at The Federalist, by Pregnancy Help News editor Jay Hobbs. Click here to read the article.