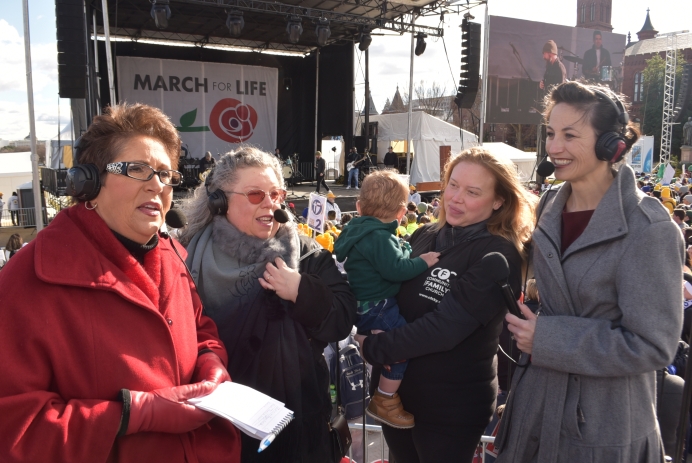 Pregnancy Help got a double shot of exposure Friday when a mom and her young son who traveled to the U.S. Capitol to take part in Heartbeat International’s Babies Go to Congress were featured on EWTN (Eternal Word Television Network) national March for Life coverage.

“We come down each year for Babies Go to Congress, and Eva was one of our moms that they joined us to share her lovely story with her legislators,” Trudden said.

“We go to two House offices and two Senate offices to simply share her story as to how the Women's Center of Ohio served her and helped her choose life, support her through this hard time, and really help her thrive as a mother throughout the past year and a half, and start making really positive choices and changes in her life that really impact not only her but her entire family moving forward.”

Heartbeat has been bringing moms and babies to the Nation's Capitol to visit lawmakers since 2009. The outreach is important in helping the lawmakers understand that pregnancy centers are good for America.

Tomeo asked Brembeck what it means for her to be there with Evalynn and her family.

“It puts the name to a face,” said Brembeck, “lets us know what we're doing and how important it is and how it's changing generations.”

Tomeo turned to Evalynn to hear about her experience on Capitol Hill and what it meant for her to be there.

“Oh, the experience was wonderful,” Evalynn responded. “It was a once-in-a-lifetime occasion. We took a lot of pictures and videos so we can keep memories of this. We're doing the work for the Lord and we're speaking life to the nation. So, we're blessed to be here.”

Tweet This: "We're doing the work for the Lord and we're speaking life to the nation. So, we're blessed to be here” - Babies Go to Congress mom

Pregnancy help is really where the rubber meets the road, Tomeo remarked to Trudden, in terms of being there for women and walking with them, which is what the pregnancy help community is doing even more of now, with the climate of attacks on pregnancy help.

“Yes,” Trudden said. “And that's something that we've been doing for more than 50 years with pregnancy centers nationwide, because there is a lot that has been going on, of course, you know, with everything since the Dobbs decision.”

“But honestly, we were ready for this since even before that decision was made,” Trudden continued. “Because even if abortion just magically was gone tomorrow, a woman will still wake up fearing that she's pregnant and need help. And that's where pregnancy help organizations come into play.”

Trudden said things have shifted a bit since the Dobbs decision bringing abortion back to the states, referencing the continued increase use of chemical abortion pills.

“We've been ready for this,” she told Tomeo. “We've been preparing our pregnancy help organizations, equipping them with the education and information they need to take on this new world, specifically with chemical abortion rising.”

“We're really doing everything that we can to be certain that we're doing our education and information, within cities within the states, to really prepare them to be that life-affirming alternative to abortion,” Trudden added.

Tomeo asked Brembeck if she was concerned about the widespread threats from abortion zealots against pregnancy centers.

“We have nine centers, and one center was hit, and it did close down one center for a while,” said Brembeck. “But we rallied. We got everything together. So yes, it is a threat.”

Brembeck let her know that their donor base had been phenomenal in its support of their pregnancy centers.

Trudden added, “With the attacks against pregnancy help organizations, what they don't realize when they're doing that is they're actually keeping women from getting the services that they seek.”

“And it's sad and disappointing,” she said. “But the great news is that time and again with the more than 70 that have been attacked and vandalized, they opened their doors the next day.”

Tomeo remarked on the Detroit-area center that was vandalized along with the home of one of its board members.

“But they opened up the next day,” Tomeo said. “They said, ‘no, we're going to continue.’ And the family is just very pro-life and said, ‘you know, we're praying for the perpetrators, and we're going to forgive them and move on.’”

Viewers were encouraged to visit the Heartbeat International website to learn more about what a pregnancy center is and how to get involved.

The Babies Go to Congress moms and their families and center staff were invited to join Heartbeat International for the March for Life.