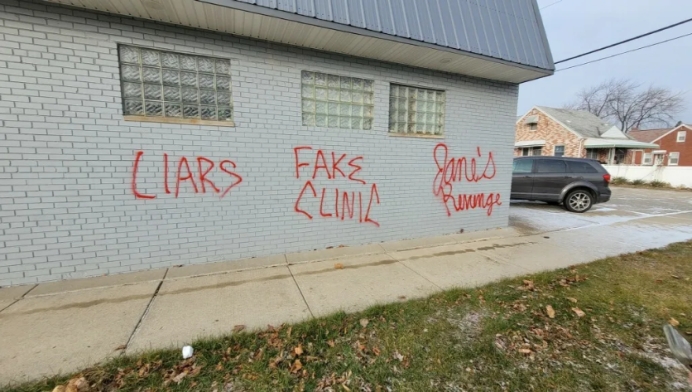 (CNA) A Detroit-area pro-life pregnancy center and the home of one of its board members were spray-painted with threatening messages early Saturday morning, according to local news reports.

The threat, “Jeanne, if abortions aren’t safe, neither are you,” was spray-painted in red on the garage door and driveway of a Pregnancy Aid Detroit board member’s home in Eastpointe, Michigan. The home’s front-door handle was also spray-painted red and a window pane was broken, according to a report at Macomb Daily.

The same morning, the pregnancy center itself was also discovered to have been defaced by red-painted messages reading “liars,” “fake clinic,” and “Jane’s Revenge.”

The center’s board member was awoken at 2 a.m. by noises outside her home. The woman saw two masked and darkly clothed individuals fleeing her home into a Prius, according to the report.

In a statement to CNA, Pregnancy Aid Detroit Executive Director Nancy Anter said: “I think what happened to us and our board member in particular is rightfully seen as a hate crime. And I think it should be investigated as such, and I think it should cause alarm nationally, regardless of your political or moral views on abortion.”

“Clearly, they don’t know what we do. I’m not really sure what the point was. We’re not political,” Anter told CNA. “We’re moms, we’re a small staff of part-time people and a bunch of volunteers, and we offer free pregnancy tests, free ultrasounds, maternity clothes, baby clothes, baby equipment, classes, support groups, referral information, diapers, wipes, formula — as much as we can to any woman who thinks she’s pregnant, who is pregnant … our goal is to help them, give them practical support.”

Since the overturn of Roe v. Wade, the group “Jane’s Revenge” has claimed responsibility for a string of acts of vandalism and attacks on pro-life groups and churches.

One Jane’s Revenge statement archived on the website The Anarchist Library states: “From here forward, any anti-choice group who closes their doors, and stops operating will no longer be a target. But until you do, it’s open season, and we know where your operations are,” and “through attacking, we find joy.”

Tweet This: I think what happened to us and our board member is rightfully seen as a hate crime. And I think it should be investigated as such.

As of Sept. 22, CNA has recorded attacks on 33 churches, 55 pregnancy centers, three political organizations, and one maternity home since early May where the public evidence points to a pro-abortion motive. The crimes include vulgar graffiti, property damage, threats, theft, and even arson.

Some pro-life organizations have faced much more than just graffiti. CNA reported the Life Choices pregnancy center in Longmont, Colorado, sustained fire and heavy smoke damage in an arson attack. The front of the building was defaced with pro-abortion slogans, including “Bans Off Our Bodies.” The threatening phrase “If abortions aren’t safe neither are you” was also written with spray paint.

Pregnancy Aid Detroit’s website states: “We hope all women marvel at the miracle of life and feel empowered by choosing life for their unborn child.”

Local police are investigating the incident, according to WJBK-TV Fox 2 Detroit.