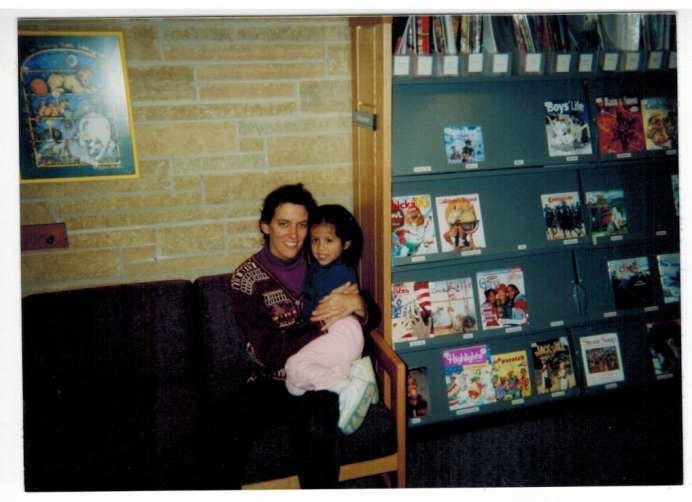 Mom and daughter Telma at the library in 2002 Laura Roesler

Bringing our adopted three-year-old home from a Guatemalan orphanage took multiple steps and constant help from God. There were times it looked overwhelming, considering I was already homeschooling our three biological children and running a household.

What helped tremendously in finalizing our daughter’s adoption was my one-step plan.

My husband and I wanted to adopt a child throughout our marriage – before we had children and after. Fortunately for us, we shared the same feelings and determination on adoption. It would not have been a good idea to adopt if only one of us wanted to do it.

I read many books, and it didn’t matter whether the stories were negative or positive. Within our circle of friends who adopted, we saw the easiest situations, as well as the most difficult cases and heartbreaking outcomes. We still wanted to go through with adoption.

Several Bible passages inspired us. So did prayer, along with talking to people who were adopted or were adoptive parents. In talking to parents, I learned how involved, complicated and time-consuming the process could be.

There were two parts to my one-step plan. One, was to make just one phone call.

A friend who had a biological child and an adopted child, gave me the name and phone number of New Horizons Adoption Agency in Blue Earth, MN. The next time I saw her she asked if I’d called them. I hadn’t. I’m so glad she checked on me, because I knew I had to call before I saw her again.

That week I kept telling myself, “It’s only one step. All you have to do is dial the number.” Those two phrases kept me moving forward to the second part of my plan - to take one step at a time.

Marlys Ubben, Executive Director of New Horizons, answered my call. Her agency’s process aided the second aspect of my one-step plan, which was to only concern myself with taking one step – the next one.

In a recent phone interview Ubben said that the process “is daunting until you break it down into pieces. We give people a list. And we start doing work on background checks and clearances.” In making the call I felt relieved because I knew other people were taking steps alongside me. These were people who knew a lot more about the process than I did.

I kept telling myself, “You only have to take the next step, just one.” Then I’d fill out one form, make one appointment, one phone call, or ask one person to be a reference, or get one more signature. I almost never tried to do more than one thing in a day. I couldn’t. I was too busy living my pre-adoption life. But every day I wished our new child could already be with us.

When I first called, Ubben patiently answered my questions about costs, timelines and the adoption process. It felt good to be taking action rather than only talking about adopting.

Adoption agencies are happy to get these kinds of calls and answer questions. Marlys said that for anyone who calls, “there’s no obligation, no pressure to adopt. In fact, she added, that prospective adoptive parents aren’t ready to adopt “if I can talk them out of it.”

Tweet This: There were many questions about costs, timelines & the adoption process. Adoption agencies are happy to get these calls & answer questions.

We filled out a short application. When New Horizons accepted that we filled out a longer one. Once that was accepted, we made a payment. They assigned us a social worker, who met with us two or three times before she came to our house, talked to our children, and completed the home study.

We attended parent training sessions that were very helpful. An important step we missed was trauma-informed training for parents. It wasn’t available at that time and is critical for understanding the effects of trauma on a young child’s development. I would have done better as a parent right away if I had been more informed. Thankfully, the Bible also gave us plenty of useful instructions on how to raise children.

We made a booklet with photos about our family and why we wanted to adopt. This was available to birth mothers so they could choose us or someone else if they decided to place their child in an adoptive home.

We let the agency know that we were available to adopt internationally as well.

Finally, the day came when an orphanage in Guatemala let New Horizons know that a girl who was two-and-a-half years old was available for adoption. The minute we read her description and decided to adopt her, we felt she was ours. Having her in another country under another person’s care, gave me the uneasy feeling that someone was missing from our home.

While we waited, there were more steps to take. For example, we needed papers translated and another reference. Each step we took moved her closer to home.

After a while the steps piled up and there we were at the airport in Minnesota in November, stepping off a plane from Guatemala with the rest of our family greeting us and my husband holding our little girl in his arms.