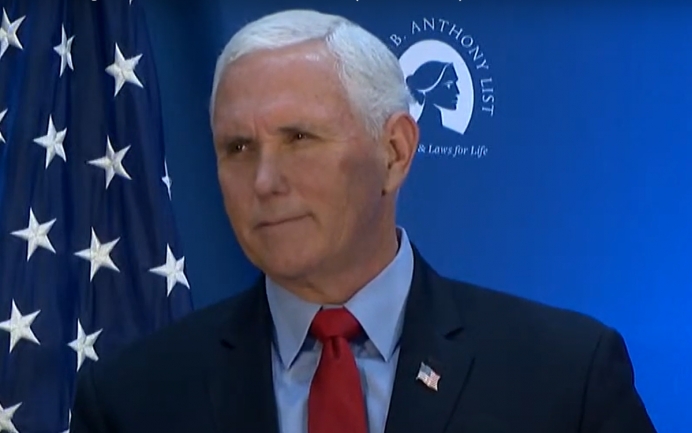 Former Vice President Mike Pence speaks at the National Press Club in Washington the day before the Dobbs case was heard before the U.S. Supreme Court Susan B. Anthony List YouTube

Mike Pence predicts that ‘tide has turned for pro-life movement’

(The Daily Signal) The day before the Supreme Court was to hear a major abortion case challenging Roe v. Wade, former Vice President Mike Pence predicted that “the tide has turned for the pro-life movement” and “life is winning across America.”

“I have long believed that a society can be judged by how it deals with its most vulnerable,” Pence told those assembled Tuesday at the National Press Club in Washington. “The aged. The infirm. The disabled. And the unborn.”

Pence referred to Dobbs vs. Jackson Women’s Health Organization, the case in which the Supreme Court this week will examine a 2018 Mississippi law that banned abortions after 15 weeks.

After the 5th U.S. Circuit Court of Appeals struck down the law in December 2019, the state of Mississippi asked the Supreme Court to take up the case.

“Today we gather on the verge of what may be a new era in American history,” Pence said. “An era in which all human life is once again cherished and respected. An era in which the great moral questions of our time are once again decided by the people through their chosen representatives instead of unelected judges.”

“As we stand here today,” the former vice president added, “we may well be on the verge of an era when the Supreme Court sends Roe v. Wade to the ash heap of history where it belongs.”

St. Augustine said, ‘The truth is like a lion. You don’t have to defend it. Just let it loose and it will defend itself.’ So here’s the truth about abortion.

Since the Supreme Court legalized abortion in 1973, the heartbreaking consequences of the Roe decision cannot be overstated. More than 62 million unborn children in the United States have been aborted. In other words, nearly 20% of the U.S. population is gone.

Lives of incalculable promise were ended before they were born. And countless young women, now for two generations, have experienced the heartbreak and sorrow, and often late in life, the regret that can last a lifetime.

Pence said the Supreme Court’s “misguided” decision in Roe inflicted a “tragedy not only on our nation but on humanity” of “unprecedented” scale.

Tweet This: SCOTUS’s “misguided” Roe decision inflicted “tragedy not only on our nation but on humanity” of “unprecedented” scale-Former VP Mike Pence

“In the 48 years since the court’s ruling, unborn children have been relegated into a cast of second-class citizens,” the former vice president said. “Devoid of the most basic human rights. Precious babies have lived outside the protection of the law, and at the mercy of a culture that devalues them and an abortion industry that profits from their suffering.”

The high court formerly justified abortion on the grounds that it is essential to the stability of American society, Pence said. But he insisted that “nothing has been more destabilizing in our society for the last 50 years than legalized abortion.”

“I believe it is no coincidence that the last half-century has seen a persistent rise in family instability,” he said, listing “single-parent households, a decline in family formation, an increase in unplanned pregnancies,” and “an explosion in sexually transmitted diseases.”

While Roe v. Wade remains the law of the land, Pence said, the “radical left in this country will never stop pushing for more and more extreme abortion-related policies.”

Pence, also a former Indiana governor and congressman, currently is a distinguished visiting fellow at The Heritage Foundation, parent organization of The Daily Signal.

Pence called on Americans, on the eve of oral arguments before the Supreme Court, to recognize that every life is a “precious” gift from God. He insisted that there is hope that the “days of Roe v. Wade are coming to an end.”

“By upholding Mississippi’s law, the Supreme Court can move America away from the radical fringe and squarely back into the mainstream of western thought on jurisprudence,” Pence said.

Tweet This: By upholding Mississippi’s law, the Supreme Court can move America away from the radical fringe and squarely back into the mainstream

“The end of Roe does not mean an end to the debate over abortion,” he added. “There will still be plenty of debate, but the decisions will no longer be made by unelected judges but by elected officials chosen by and accountable to the American people.”

This is one reason why progressives oppose overturning Roe, the former vice president added.

But in the decades since Roe, Pence said, many states and lawmakers have passed pro-life legislation and limited government funding of abortion.

Now more than ever, we need our new conservative majority in the Supreme Court of the United States to return the question of life to the states and the people. Traveling across this great nation of ours, I can tell you, firsthand, that the support for the pro-life cause is growing stronger every day, in no small part because of the work of each and every one of you.

As we stand here today, nearly 500 pro-life bills have been introduced nationwide this year alone. And while I can’t say how the Supreme Court will rule, today I can say with absolute confidence that the tide has turned for the pro-life movement, and momentum for the cause for life has never been stronger. Life is winning across America.

Pence attributed the pro-life momentum to family conversations about abortion and to pro-life activism across the nation, but “most especially” to crisis pregnancy centers across the country.

“The truth is, life is winning, I think maybe most especially because of the compassion and the work of nearly 3,000 pro-life pregnancy centers nationwide,” he said. “These organizations are devoted to serving mothers in their courageous decision to give their children life and a future, oftentimes under the most difficult circumstances.”

Tweet This: Life is winning because of the compassion and the work of nearly 3,000 pro-life pregnancy centers nationwide - Former VP Mike Pence

Pence called on Americans to pray urgently that the Supreme Court overturn Roe v. Wade and save the lives of millions of future babies.

“What kind of nation do we want to be in the balance of the 21st century?” he asked. “Do we want to be a nation that tolerates abortion on demand, denying our country the incalcuable promise of men and women who would contribute so much to the life of this nation?”

Pence asked whether Americans want the United States to “be a nation that tolerates the ending of innocent, unborn human life through all nine months of pregnancy,” noting that “is what the left wants.”

“Or in the time that we have, in this century and beyond, do we want to be a nation that champions and celebrates the gift of human life?” the former vice president asked. “A nation that comes alongside women in their hour of need. A nation that stands up for the weak and fights for the senseless, a nation that says proudly and without apology that every life matters, every child deserves a chance.”

Editor's note: This article was originally published at The Daily Signal, the Heritage Foundation's news platform.