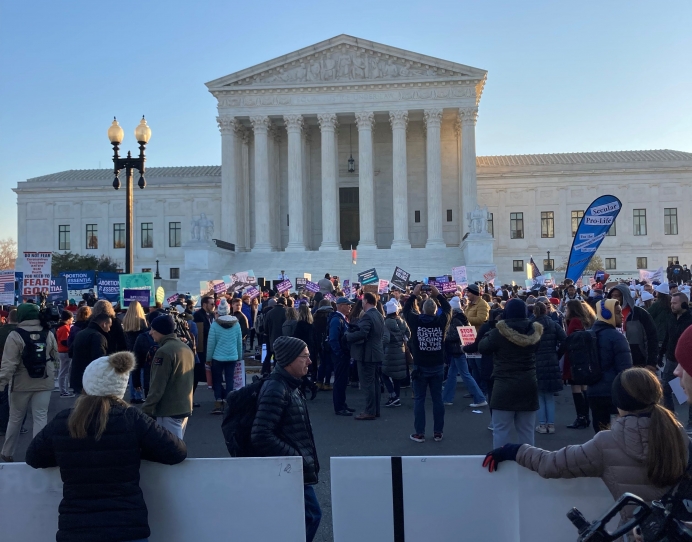 Today, the Supreme Court heard oral arguments in Dobbs v. Jackson Women’s Health – a case which will decide the constitutionality of a Mississippi law that bans most abortions after 15 weeks of pregnancy. Heartbeat International filed an amicus brief in support of the 15-week limit on abortions and urging the Court to overturn Roe v. Wade. This is the most important abortion case in 30 years.

And the crowd gathering in front of the Supreme Court hours before the argument began attested to the importance of this case. Easily thousands of people gathered to pray, protest, and petition, the majority in support of protecting human life in the womb. The tone and tenor of the pro-life crowd was one of support for both women and their unborn children, of joy for life, and of hope for positive change coming from the Supreme Court.

Tweet This: The tone of the pro-life crowd gathered for the Dobbs hearing was one of support 4women &their unborn children, joy 4life, & hope 4change.

Inside the courtroom, that hope looked even brighter.

For 50 years, states have been unable to protect infant life before viability. First Roe (through its so-called trimester framework) and then Casey (with its viability line and undue burden standard) acted to prevent any law that states passed to protect babies before the 24th week of pregnancy. After today’s argument, it seems like that those prohibitions are about to change.

All eyes were on three justices today.

It is broadly understood that Justices Sotomayor, Breyer, and Kagan would strike down Mississippi’s law and further cement abortion into its imagined position as a constitutional right. It was also considered likely that Justices Thomas, Alito, and Gorsuch would uphold the Mississippi law and might even consider overturning Roe and Casey.

That leaves Justice Roberts, who is deeply concerned about the Court’s legitimacy in the eyes of the public, Justice Kavanaugh, who has seemed more interested in incremental changes to the law than monumental ones, and Justice Barrett, who might be hesitant to overturn Roe and Casey without a clear framework going forward.

Legal analysts on both sides predicted that the Court would toss the viability line, thereby allowing restrictions on abortion before 24 weeks gestation but expected that the Court might try to find a “middle ground” rather than overturn Roe and Casey.

But today’s argument did not point to a clear middle ground.

Tweet This: Dobbs v. Jackson is the most important abortion case in 30 years. The SCOTUS justices seem ready to uphold law protecting babies at 15 weeks

Justice Kavanaugh asked only a couple of questions, focused primarily on the idea that the Court should not pick sides in the abortion debate.

During Mississippi’s argument, Justice Kavanaugh emphasized that overturning Roe would not outlaw abortion but instead send the question back to the states. Later, he asked both the attorney for Jackson Women’s Health (Julie Rikelman) and the Solicitor General (Elizabeth Preloger, who argued against the Mississippi law) why the Court should be the final arbiter in the abortion discussion, rather than the people, through their democratically elected representatives.

He also gave a long list of cases where the Supreme Court had overruled precedent, noting that those cases were some of the Court’s most consequential cases and “if the court had adhered to precedent, the country would be a much different place.”

Kavanaugh might well be a fourth vote to overturn Roe, leaving pro-lifers seeking a fifth.

Will Justice Barrett be that fifth vote? Hard to say. Justice Barrett did not tip her hand much in today’s argument. She asked both Rikelman and Preloger about the Safe Haven Laws, noting that those laws allow women to avoid the burdens of parenthood, burdens that Roe and Casey considered strong enough to justify a right to abortion and which the pro-abortion advocates highlighted as reasons to uphold abortion rights.

In the end, the Court appears poised to have six easy votes to jettison the viability line.

But what would they replace it with? Justice Roberts seemed inclined to throw out the viability line but keep Casey’s undue burden standard, and apply it to all abortion regulations, regardless of whether they were before or after viability. But when Justice Gorsuch asked Rikelman whether it would be workable to do just that, she admitted that such a scheme would not work. And later, in response to whether there is any other intelligible line for the Court to use, Preloger admitted that there was not.

If the Court was hoping for today’s arguments to provide a path forward that involved a “middle ground” or “compromise,” it was sorely disappointed. The attorneys left two options on the table: maintain the status quo or overturn Roe and Casey. There is reason to be hopeful that the Court might take the second option.

A decision is expected in June.

A wife and mother of four, Danielle has always been passionate about serving women facing unplanned pregnancies. She grew up attending pro-life events, such as the annual March for Life in Washington, D.C., and served with a maternity home during law school.