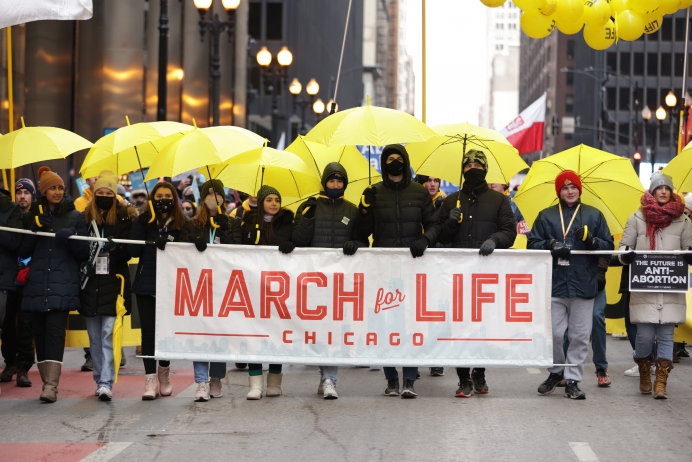 Midwesterners in the thousands rally, march at “ground zero" in the fight for life

Thousands of pro-life advocates from across the Midwest gathered Saturday at Federal Plaza in Chicago before marching down Michigan Avenue as a public witness for the rights of the unborn.

The annual March for Life Chicago comprised of people from diverse ethnic, social, and religious backgrounds and focused on defending and protecting human life has continued to grow each year, buoyed by Midwestern pro-lifers responding to the state of Illinois's extremist abortion climate.

A line-up of speakers exhorted march participants to speak out and advocate for life, and to serve mothers and their babies.

A client from Chicago-area pregnancy help organization Aid for Women, Jowanda, shared her experience with assistance from Aida for Women when she was pregnant.

“I initially wanted an abortion when I came to them," she said, but they kept checking on me."

"And by the time my baby was born I had everything I needed," Jowanda said. "They helped me feel strong and empowered and they were always there when I needed someone to talk to. I hope more women are able to experience the same care and love that I did.”

The 2022 March took the theme of “Saving Midwestern Lives” in response to Illinois's increasingly extreme abortion policies. These policies, March organizers say, are drawing women and girls from throughout Illinois and neighboring states to get abortion on demand at any stage of pregnancy.

Pastor Chris Butler of Southside Chicago's Embassy Church addressed the racial component of abortion and how women are victimized by it.

“We’ve got to fight and we have to create a culture of compassion and understanding and restoration in this pro-life movement,” Butler said.

Tweet This: Thousands of pro-life advocates from across the Midwest gathered Saturday in Chicago as a public witness at the March for Life Chicago.

Kelly Dore, founder of the National Human Trafficking Survivor Coalition and director of  the Sierra Cares Foundation, touched on abortion as a human rights issue.

“I am a wife, I a mother, I am an international public policy advisory, a non-profit founder, I am sex trafficker survivor, I am Catholic, and I am unabashedly proud to say I am pro-life," Dore told the crowd. "It is not a political ideology, It is a human rights issue across the board…As a survivor of childhood trauma, we cannot sit here and say some lives are more valuable than others.”

Prior to the rally and march participants took part in the March for Life Chicago Convention with offerings to educate them on how to change hearts on abortion, save and serve mothers and babies, and become leaders in their local communities across the Midwest. Topics covered included parental notification, Illinois’s sex ed law, how Illinois’s abortion laws impact the entire Midwest, abortion pill reversal, and sexual trafficking’s ties to the abortion industry.

The day also included a youth tally and an expo. March for Life Chicago Director Kevin Grillot but announced a new program to mobilize pro-lifers throughout the year. Grillot said the “Pro-Life Builder” program would funnel grassroot efforts and "equip people to teach, serve, and lead in their communities. Because today marks the beginning of marching for life all through 2022.”

Following the rally, attendees marched through the streets of Chicago, including Michigan Avenue, giving public witness and declaring their commitment to save Midwestern lives.