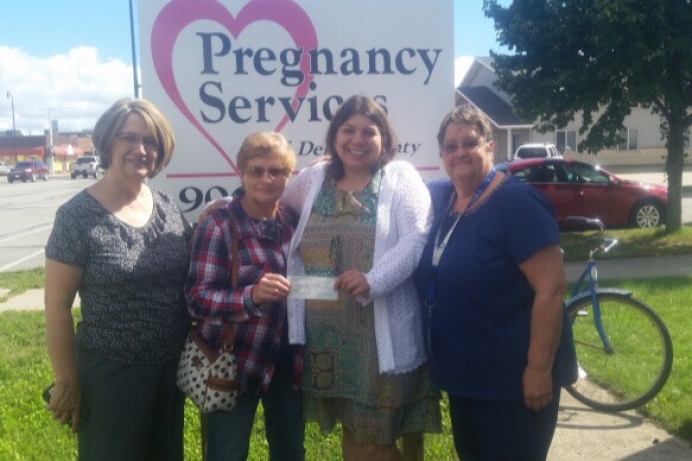 After more than three decades of serving pregnant women from her home in Escanaba, Michigan, Carol Carlson, founder of Pregnancy Services of Delta County, knew her organization needed room to grow. But how, she wasn’t sure.

But there were no organizations devoted to helping women through an unexpected pregnancy or those who were post-abortive.

In 1978, just a couple of years after Roe v. Wade was decided by the Supreme Court, all of that changed. When a pastor approached Carlson, a member of Delta County Right to Life, to help a woman facing an unexpected pregnancy, she saw a deep need.

“We knew we needed to do something,” Carlson said. “We say we’re against something, but we need to help people.”

Carlson and a group of others began to look for ways to serve women who were dealing with unexpected pregnancies, as well as those who were affected by the trauma of abortion. Operating out of Carlson’s home, they offered free pregnancy testing and baby supplies, and established a helpline that went through Catholic Social Services and OSF St. Francis Hospital. 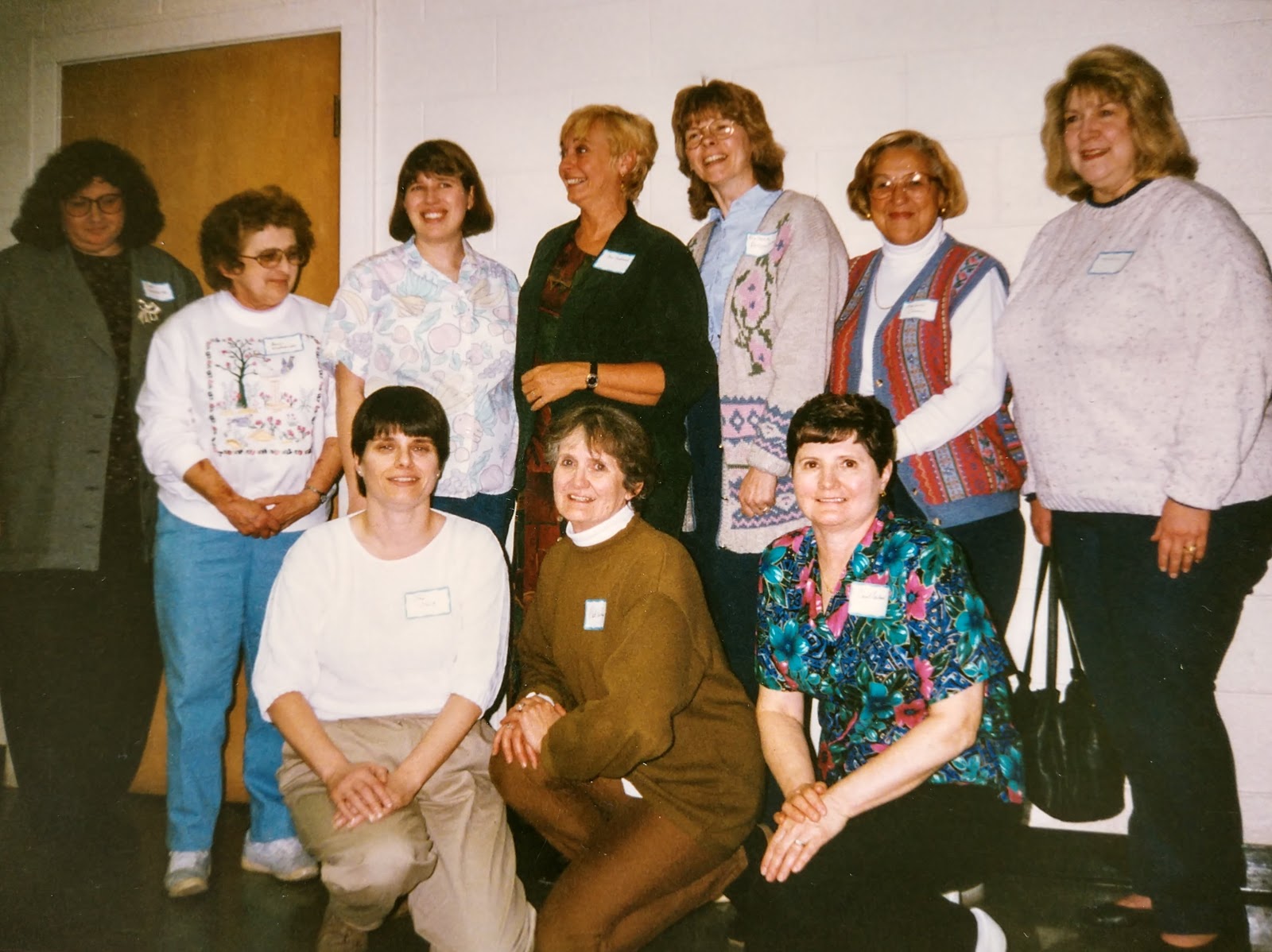 Carlson and her teammates began building the Pregnancy Services of Delta County just a decade after the first pregnancy help center was founded in Toronto, Canada. Pregnancy Services of Delta County became part of a growing number of organizations that helped women facing unexpected pregnancies in the years leading up to and following legalized abortion.

“Carol’s very nonjudgmental, very loving, very accepting of people,” said Audra Buchmiller, current executive director of Pregnancy Services of Delta County. “She just has a very calm and peaceful demeanor—that kind of person draws people to them and that’s the kind of spirit you need when working with women in crisis.”

But it hasn’t always been easy for Carlson. Just five years into running her ministry, she was faced with a family crisis that would end up deepening her commitment to the unborn.

In 1983, Carlson’s 13-year-old son had a critical injury that left him in a coma. Carlson prayed that God would heal her son, telling Him she would never give up on the unborn if God healed him, and that she would care for her son to the best of her abilities if he had ongoing medical issues. Today, her son is an engineer in Minnesota who is married with three children.

“It wasn’t that she kind of did something, in essence, to hold up her end of the bargain,” Buchmiller said. “She just was all in, wholeheartedly serving families in crisis tirelessly for the Lord for 36 years.”

“His healing was so miraculous,” Carlson said. “I was so grateful to the Lord.”

Pregnancy Services of Delta County continued to grow for the next few decades, but volunteers started to dwindle by the 2000s. Feeling overwhelmed, Carlson prayed for help to carry her center out of her home.

The Answer to a Prayer

In 2010, Buchmiller was a Bay College nursing student about to start clinicals in Marquette, Michigan with no background in pregnancy help work. She saw a sign for the Care Clinic, a pregnancy center in Marquette, and stopped in, figuring there may be potential job opportunities after she graduated from nursing school.

As she toured the clinic, Buchmiller felt the Lord calling her to take action on her pro-life convictions.

She wasn’t familiar with any similar services in Escanaba, so she started asking around. That’s when she was connected with Carlson. She called Carlson to tell her about the tour of the Care Clinic and to ask more about Pregnancy Services and what services they provide.

Carlson explained how the only volunteers left were her, her husband, and her neighbor Pat Way, who was the treasurer. Carlson would answer the phone because the lines went directly into her home, and she and her husband would drop off materials and supplies to women and families in need. People showed up at the house all hours of the day and night.

“I was like, ‘Oh my goodness, that’s amazing, you guys are saints,’” Buchmiller said. “I told her about the Care Clinic up in Marquette, incorporating the Earn While You Learn program or providing ultrasounds.”

“Do you see pregnancy services growing out of your home?” she asked.

Carlson did not feel led to move the services out of her home just yet, but Buchmiller continued to work as a community liaison in Escanaba the Marquette Care Clinic, which was located an hour away.

When Buchmiller graduated from nursing school, Buchmiller and a band of like-minded neighbors came to Carlson to tell her about their calling to open a pregnancy center in the community. By that point, the work was overwhelming for Carlson.

“They were such an answer to prayer, God’s grace was just flowing,” Carlson said. “I thought it was wonderful because a lot of our volunteers had gotten sick or passed away.”

In 2014, The group decided to host an ecumenical prayer service in the community for life—the first ecumenical service of its kind in decades—and over 200 people showed up. There, the vision to bring Pregnancy Services of Delta County to the forefront of the community was shared. After the service, many people donated money and pledged to volunteer at the prospective center.

“Ecumenism is something that’s really close to my heart, I love working within different faith communities,” Buchmiller said. “I really believe we have to build bridges and being together for life—that’s what’s going to unite us really for God. It really is a spiritual battle that we’re fighting. We really need to come alongside each other as brothers and sisters and be that witness in the world.”

A few days after the prayer service, Buchmiller met with supporters Ken and Pat Gartland of Escanaba to tell them more about pregnancy services, and they offered to buy a house for the center.

“We’re like ‘What?!’ It was one of those moments with the Lord where all these doors fly open,” Buchmiller said. “It was just amazing, and I continue to be in awe of their generosity. It’s not like I was doubting God, but He just always answers in abundance. It was amazing to see that and be a part of that, and one of the most exciting things for me is when you see people coming together and working together. Our community’s been very supportive.” 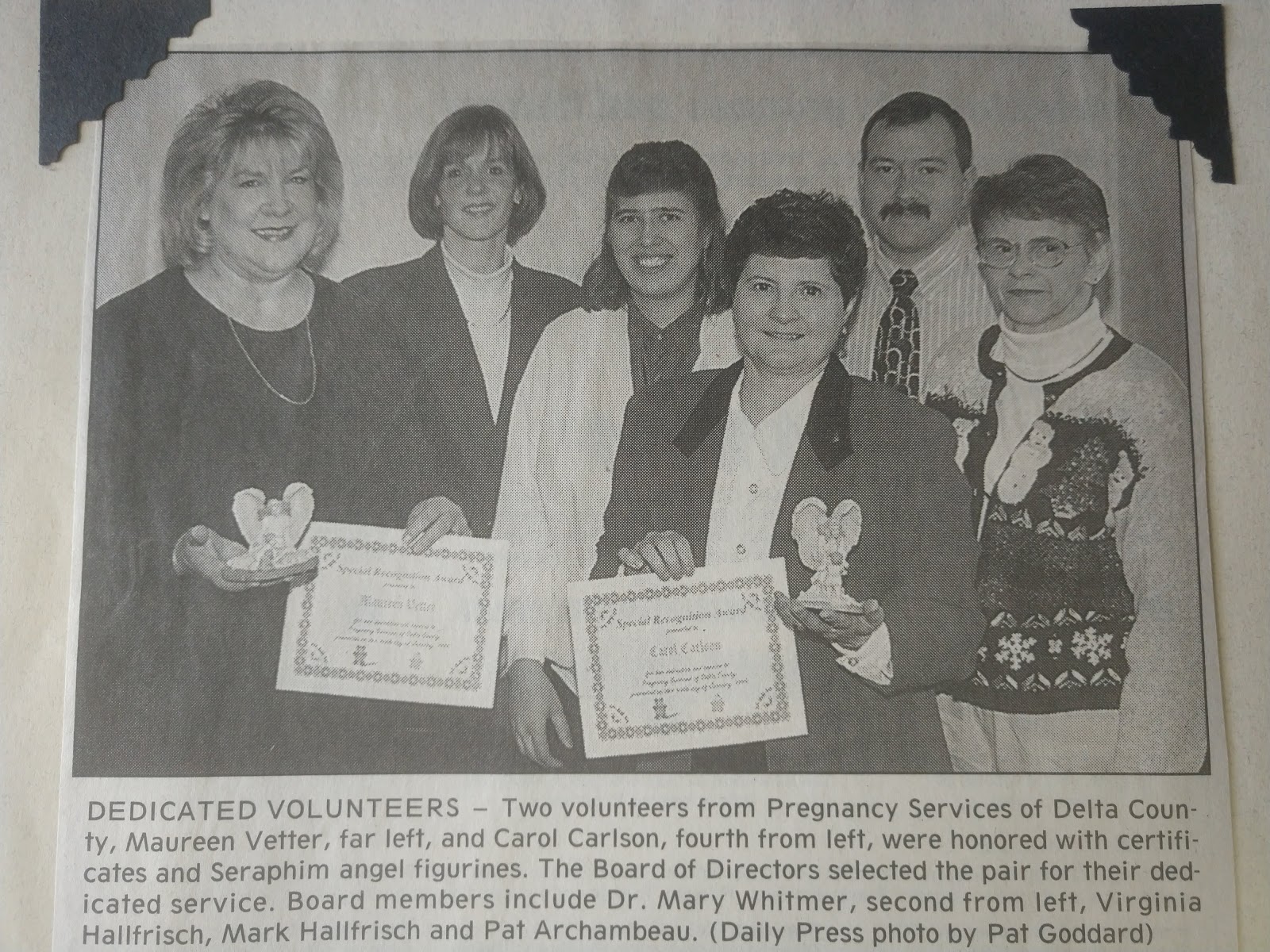 Newspaper clipping from the 1990s features Carlson, as well as Dr. Mary Whitmer and Virginia Hallfrisch, both of whom have served on the center's board of directors. | Photo Courtesy: Pregnancy Services of Delta County 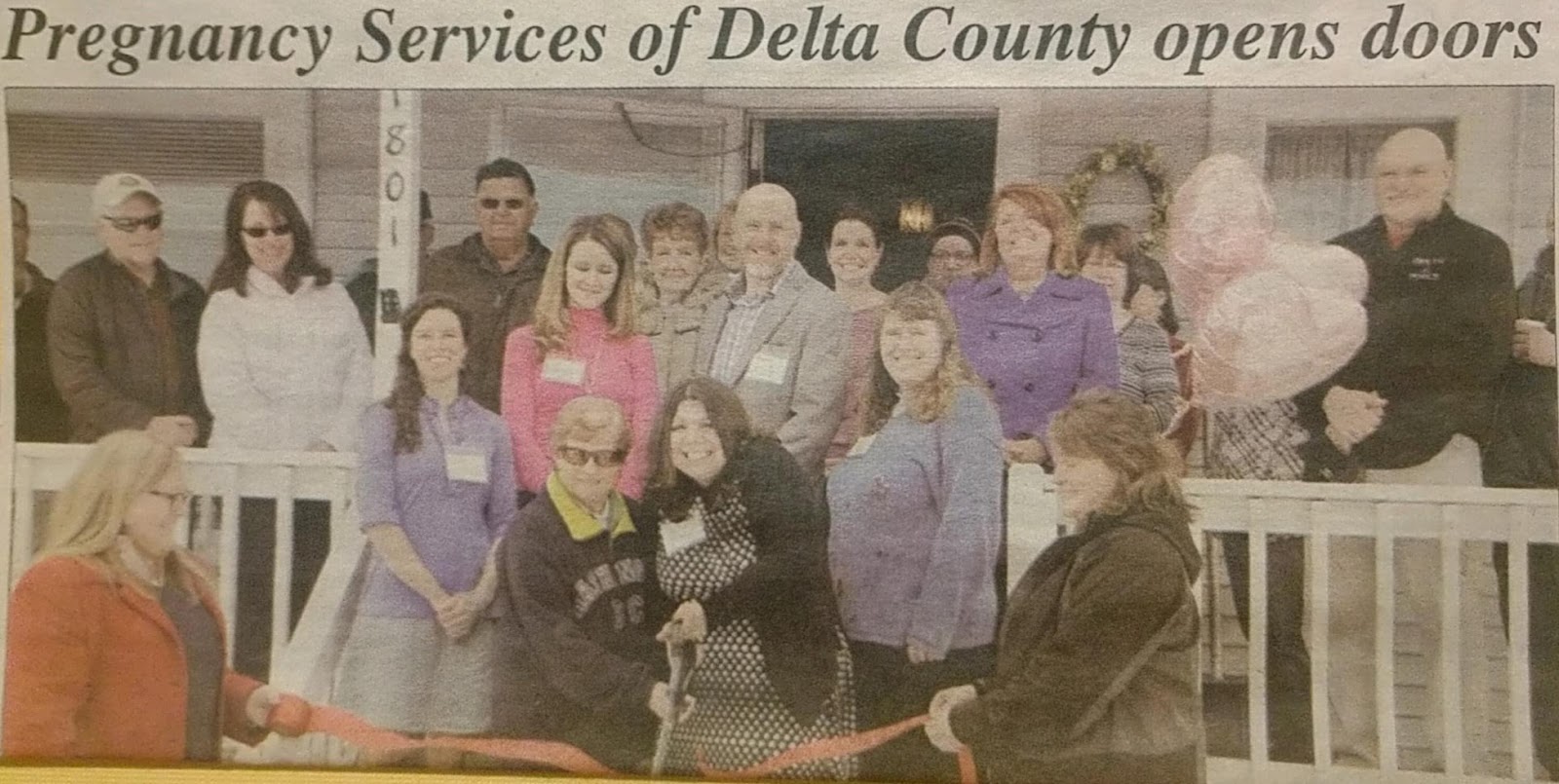 The center opened in March 2015 and has served over 300 clients and families. In 2018 alone—their fortieth year of operation—they served 125 families, held over 700 parenting, wellness, and life skills classes and had 32 babies born through their ministry.

Tweet This: How one woman’s home-based pregnancy center has transformed lives for the last 40 years #prolife

Little did Carlson or anyone in the early pregnancy help movement know how God was going to use their work. By 2017, pregnancy help centers all across the U.S. served almost 2 million people in a single year.

Today, at 76 years old, Carlson is still the Delta County Right to Life chairman and corresponds with Buchmiller regularly.