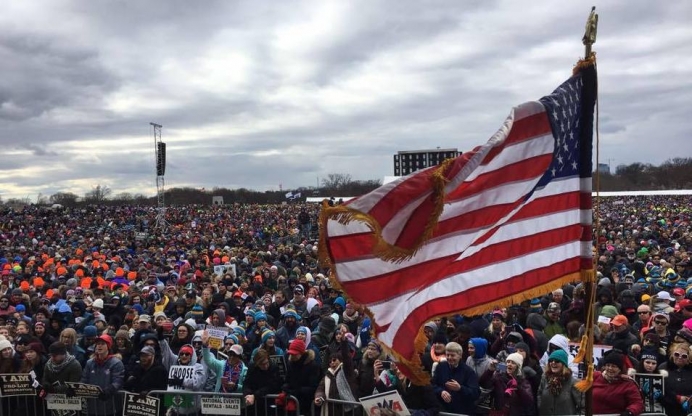 If ever we had a dearth of reporting and commentating on abortion in this country—and I believe we have—the past week or so should go a good distance to cure that.

Abortion was in the news starting with the so-called “Women’s March” on Jan. 21. The march started as a protest against the purported overall badness of newly inaugurated President Donald Trump, but by the time the laundry was out drying on the line, a pointed focus on abortion became undeniable.

Amid the turmoil, abortion enthusiasts like NARAL and Planned Parenthood rose to the fore, while pro-life groups including New Wave Feminists and Stanton Healthcare were cast aside for their unorthodox—and therefore, non-womanly—views concerning the personhood of babies living in the womb.

Meanwhile, what can only be described as the insane ramblings of a lunatic mind appeared in the pages of The Atlantic, asserting that ultrasounds are dangerous tools of witchcraft used by ideologues to fabricate and perpetuate the illusion that a baby in the womb has such attributes as heartbeats, organs, arms and legs.

As of Saturday afternoon, the article is only four days old, but is posted online with 10 lines worth of retraction notes, “significantly revised” as the editor’s note above the article correctly indicates.

(In the time between, I’d be remiss to omit—and may need a “significant revision” if I did—Heartbeat International brought seven moms to Washington, D.C. to meet with their lawmakers and tell their stories in the “Babies Go to Congress” event. Five of those seven moms told their congressmen that an ultrasound in a pregnancy center played a significant role in helping them reject abortion and choose life.)

It was in this atmosphere, lest readers from the future should perchance stumble upon this article, that The Washington Post ran a truly enlightening piece called, “Why these activists don’t like calling themselves ‘pro-life’ anymore.”

The article focuses on Kristan Hawkins, the president of Students for Life, who spoke at Heartbeat International’s 2015 Annual Conference and gained her first experience in pro-life work at her local pregnancy center in Steubenville, Ohio.

The term “pro-life” — used by abortion opponents to proudly define the value at the heart of their movement for 44 years since Roe v. Wade — is out of favor among many young adults today.

And Hawkins, the president of Students for Life, said that her organization is turning instead to a term that the media has long used to describe these activists, usually over the activists’ objections: “antiabortion.”

“We’re against abortion. I think it’s much simpler. It gets across what we’re about in a faster way,” said Hawkins, 31. “It’s already a bad thing. To say you’re against it is okay. I am antismoking. I’m anti-sex trafficking. I’m anti-drunk driving. And yes, I’m antiabortion.”

Now, as a young adult myself—full disclosure: I did get called “sir” by a kid in his early 20’s the other day, and still haven’t forgiven him that particular trespass—and a pro-life activist, of sorts, I have just one word for Hawkins. Amen.

And, as I leave Washington, D.C. and head back to my happy home in Midwestern flyover country this evening, I want to call my fellow pro-lifers—whether young or old adults, or somewhere else on the spectrum—to listen closely to what Hawkins is arguing.

What she’s saying effectively amounts to a plea to her friends in the pro-life movement: Let’s make pro-life anti-abortion again.

Before I go any further, it’s perhaps helpful to note (it is to me at least) that Hawkins is emphatically not arguing that we ditch our emphasis on meeting the needs of mothers and families faced with unexpected pregnancies. It’s been said before and it bears repeating, a woman “chooses” abortion like a man “chooses” to saw his arm off when it’s caught under a rock.

Abortion, seen through this lens, is an “unchoice.” The main way we meet that need, then, is to provide such a woman with true choice by ensuring she has a chance to fully understand her situation, know her options, learn about her rapidly growing baby via ultrasound, and get every piece of material assistance she so desperately needs.

If we meet those needs—which gets to the purpose for which pregnancy help centers exist—we’re giving her a “choice” she never knew she had.

So, why do folks like Kristan Hawkins want to make pro-life “anti-abortion” again?

The answer is clarity. There exists a problem, an unthinkable crime against humanity called abortion. We are against it. We want it to end forever, to see it tossed onto the “ash heap of history” along with those laws that enable it to continue unchecked.

Properly applied, “pro-life” is synonymous with “anti-abortion.” The problem comes in when we try to load other issues—important as they may be—into our understanding of what it means to be “pro-life.”

This winter, I read my kids a storybook called, “The Mitten.” First, a mouse finds a lost mitten in the snow and makes it his snuggly home. Next comes a squirrel, followed by a fox, then a bear. Eventually, the mitten can’t bear the size and scope of the animals, and flies away, careening into the winter’s afternoon.

The more we load “pro-life” with crucial issues—immigration, poverty relief, clean water, even human trafficking and capital punishment—other than abortion, infanticide or euthanasia, the closer we’re getting to the day when we’ve overstretched our terms. Soaring goes the mitten.

Can we be “pro-life” and hold differing views on immigration? Absolutely. At least so long as nobody is advocating the intentional, targeted murdering of immigrants. Can “pro-lifers” disagree on capital punishment or the size and scope of the government when it comes to meeting the needs presented by poverty?

I believe we can, but it’s precisely here that we need clarity. Abortion is the legalized shedding of innocent blood, and that’s why we oppose it. From root to leaf, it’s a moral outrage unmatched by any other issue we face as a society.

There’s only so much room in the mitten, and that’s why clarity is needed—especially now, at a moment when the Goliath of abortion is staggering and ready to fall.