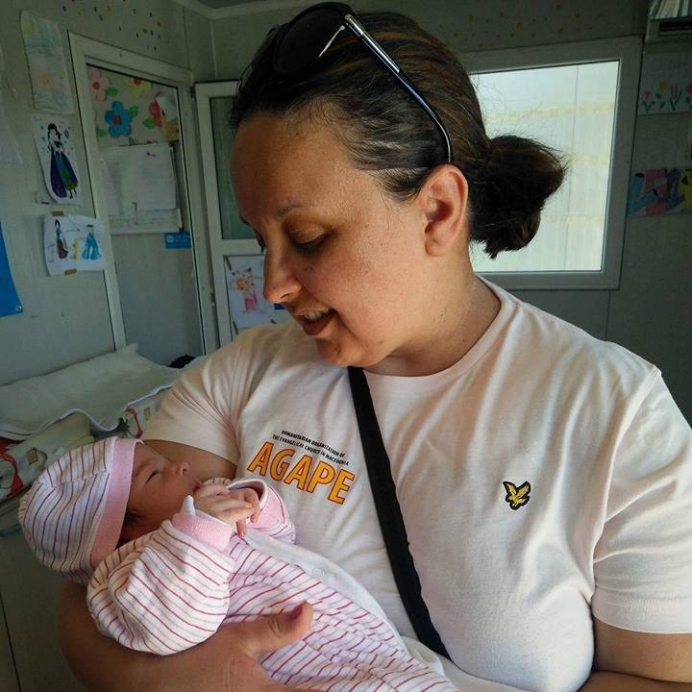 Svetlana Jovanova with a newborn at Tabanovce, a refugee camp in Macedonia Photo Courtesy: Lydia: A Beating Heart

As Europe and the West continue to grapple with a refugee crisis that has displaced millions, Macedonia’s decision to close its borders to northward travelers in March 2016, has played a prominent role in the ongoing crisis.

With around 50,000 refugees already stranded in Greece at Macedonia’s southern border and the “Balkan route” to Europe effectively cut off, one of the only remaining solutions for refugees intent on reaching western European soil is to cross the Mediterranean Sea by boat—which authorities say has cost 2,800 migrants their lives just since the start of 2016.

Though the ongoing situation can have a polarizing effect on observers in the West, Macedonian churches and nonprofit organizations are rolling up their sleeves to pitch into the relief effort in tangible ways.

One organization, Lydia: A Beating Heart, is extending its services into the refugee camps near them, reaching women and children on the frontlines of the crisis while continuing to expand their everyday presence in three locations throughout the nation.

“Sometimes it looks like even Europe forgot about them and now they are focused on more important things,” Svetlana Jovanova, the organization’s executive director said of the refugees stranded in Macedonia. “But for the refugees who are still stuck in Macedonia, every day is a battle they have to fight.”

The first pregnancy center in Macedonia, Lydia was founded in 2012 in partnership with Blue Ridge Women’s Center in Roanoke, Va. As the refugee crisis has mounted, Lydia has worked alongside local churches to make sure mothers have food, diapers, baby clothes, wet wipes and other essentials while they remain in Macedonia.

Jovanova and other volunteers from Lydia are currently tending to the needs of those held at Tabanovce, near the northern border of Macedonia—over an hour from Lydia’s main location in Štip.

Tweet This: "For the refugees in Macedonia, every day is a battle" #RefugeeDay #WorldRefugeeDay #prolife

Most of the 200-300 refugees are women and children, including some who have been born in the camp, Jovanova said.

In an email to supporters, Jovanova told the story of a 10-day-old baby girl whose mother had no clothes or diapers for her newborn because of a breakdown in the aid delivery process.

From now on, Jovanova said she and her fellow volunteers are “finding creative ways to help the moms,” leaving packages of food and material supplies directly in the mothers’ tents rather than handing them off and hoping they make it to the mothers and children who need them.

“You can imagine my frustration,” Jovanova said. “Luckily, many people pray for me and my patience, so it was hard, but I was able to control myself. My heart was broken. That 10-days-old baby was already living a hard life.

“Please pray for them. Pray for that baby.”

Click here to find out more about Lydia: A Beating Heart, including how you can give to their life-affirming work.