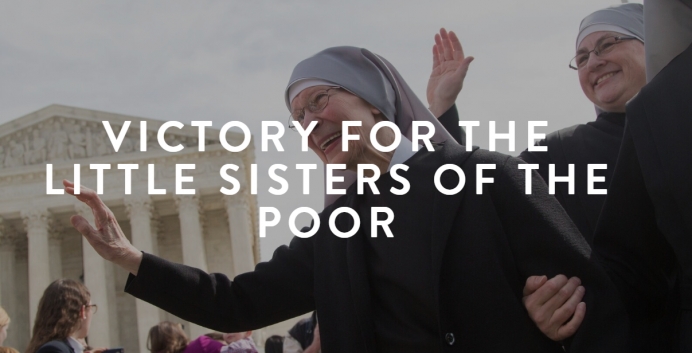 The Little Sisters of the Poor netted a big win from the U.S. Supreme Court this week when the Court ruled that the Sisters cannot be forced to take part in providing contraceptives to employees.

The High Court sided with the religious order and the Trump administration, Fox News reports, ruling that the administration acted within its authority when it expanded exemptions to the Affordable Care Act’s (ACA) contraception mandate.

The Obamacare mandate compelled employers to participate in or help facilitate the provision of contraceptives, abortifacient drugs and other life-ending devices for their employees.

The Little Sisters of the Poor are an international congregation of Roman Catholic women religious who serve the elderly poor in more than 30 countries worldwide. The Sisters' mission is offer the neediest elderly of every race and religion a home, care and human dignity.

Participating in the provision of contraception and abortifacients would have violated the Sisters' deeply held religious beliefs, and thus they declined to comply with the policy, along with Hobby Lobby and other religious groups.

Justice Clarence Thomas authored Wednesday's 7-2 majority opinion, which ruled the Trump Administration was within its authority in expanding exemptions to the ACA mandate and praised the work of the Catholic charity at the center of years of litigation and debate over the contraception mandate.

"For over 150 years, the Little Sisters have engaged in faithful service and sacrifice, motivated by a religious calling to surrender all for the sake of their brother," Thomas wrote. "But for the past seven years, they—like many other religious objectors who have participated in the litigation and rulemakings leading up to today’s decision— have had to fight for the ability to continue in their noble work without violating their sincerely held religious beliefs."

"We hold today that the Departments had the statutory authority to craft that exemption, as well as the contemporaneously issued moral exemption," Thomas continued. "We further hold that the rules promulgating these exemptions are free from procedural defects."

The Becket Fund for Religious Liberty (Becket Law), a law firm specializing in religious freedom that has been representing the Sisters, issued a statement upon the ruling's release.

"The Supreme Court ruled in favor of the Little Sisters of the Poor 7-2 today, allowing them to continue serving the elderly poor and dying without threat of millions of dollars in fines," the Becket Law statement said. "In Little Sisters of the Poor v. Commonwealth of Pennsylvania, the Little Sisters made their third trip to the Supreme Court, dragged by several states that tried to force Catholic nuns to provide coverage for contraceptives and abortion-inducing drugs. Today’s ruling grants them protection to freely serve the elderly poor without violating their conscience."

Becket Law also included comment from one of the Sisters.

“We are overjoyed that, once again, the Supreme Court has protected our right to serve the elderly without violating our faith,” said Mother Loraine Marie Maguire of the Little Sisters of the Poor. “Our life’s work and great joy is serving the elderly poor and we are so grateful that the contraceptive mandate will no longer steal our attention from our calling.”

Tweet This: “We are overjoyed that, once again, the Supreme Court has protected our right to serve the elderly without violating our faith”

Tweet This: "We are so grateful that the contraceptive mandate will no longer steal our attention from our calling.”

Back in 2011 the Obama administration began requiring employers to provide cost-free coverage for contraceptives, sterilization and “emergency birth control” in employee health plans under the ACA. While the Obama administration gave an “accommodation” to the Little Sisters of the Poor and other religious non-profits that had objected to the mandate, the Sisters sued in 2013, arguing the process still meant they would essentially be complicit in the provision of contraceptive coverage being delivered through their health plans.

In a divided 2016 ruling the Supreme Court sent the case back to the lower courts, instructing both the Obama administration and the plaintiffs to reach a compromise that meant cost-free contraceptive coverage would still be given to employees, but done so while respecting the religious groups' moral objections.

In 2017, the Trump administration granted a religious and moral exemption to the mandate for the Sisters and the other groups, however the states of Pennsylvania and California then filed lawsuits arguing that the burden of providing contraceptive coverage was being moved onto the states, also claiming that the by establishing the exemption the Trump administration had violated the Administrative Procedure Act.

A nationwide injunction had put the exemptions on hold.

The SCOTUS's ruling Wednesday "amounts to a huge win for religious conservatives who have been battling the ACA's contraceptive mandate for years," the Fox News report said.