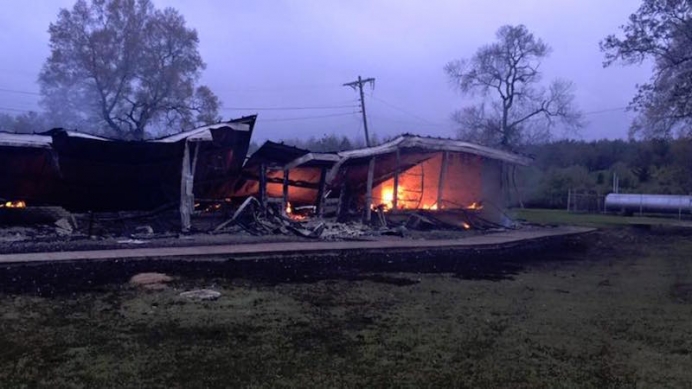 2 Birth and Beyond had housed its ministry, along with a local church, at a former school building that was destroyed in a recent fire. Photo Courtesy: Regina Bullard

You could forgive Regina Bullard if she reads a bit too much of her own situation into her personal Bible reading this year.

One passage that might be especially hard for the Louisiana pregnancy center director to read objectively is Isaiah 43:2.

“When you pass through the waters, I will be with you; and through the rivers, they shall not overwhelm you; when you walk through fire you shall not be burned, and the flame shall not consume you.”

Starting with a flood March 10 that destroyed everything she and a small band of volunteers were unable to pack away in waterproof tubs and followed up by a fire that took everything else two weeks later, Bullard has faced down the threats the Old Testament prophet predicted—all within the same month.

But Bullard will also be the first to tell you she’s claiming full ownership of the promises Isaiah 43 holds out God’s people.

Actually, the way Bullard and her team have gone about their ministry since they launched “2 Birth and Beyond” in 2012 has set them up as somewhat of a fireproof organization.

Renting office space in Oak Grove, La., at the northeast corner of the state, Bullard and her ministry partner began researching ideas and praying for direction on how to reach women vulnerable to abortion in their area.

In a rural area where the closest life-affirming locations are over an hour’s drive to Monroe, La., Vicksburg, Miss., and Crossett, Ark., Bullard—whose background is in health care administration—and her co-founder, Tracy Thompson, a paralegal, found that mobility would be their most strategic approach.

Tweet This: Flood? Fire? Both. No big deal for #prolife #pregnancyhelp effort in Louisiana #prolifegen

After operating out of a rented office for the first year and half, 2 Birth and Beyond and a local church that has played a major role in supporting the center landed a major break. A local school district had closed down one of its school buildings and needed an occupant to keep up the property—at no charge for 2 Birth and Beyond.

Soon, between the various ministries of the church and 2 Birth and Beyond, there was a wide spectrum of faith-based community services taking place every day of the week.

The new location also allowed Bullard to keep her strategic focus on reaching those who would find it difficult to come to the center.

“When we moved there, I knew that was going to allow me to be more mobile,” Bullard said. “I wasn’t just going to sit around the office. They would call me, they would text me or Facebook me, and I would go meet with them. That’s just been the need in our area.”

Help at the Bible Belt’s Buckle

As can often be the case in the small towns of the Bible Belt, the guilt and shame surrounding an unexpected pregnancy—particularly for teen moms—are major underlying factors that would lead a woman to abort in northeast Louisiana.

Rated the top pro-life state by Americans United for Life in five of the past seven years, including four years running, Louisiana’s reputation as a pro-life haven is backed up by state measures banning abortion beyond 20 weeks, as well as a 24-hour waiting period prior to undergoing an abortion and a mandatory ultrasound prior to an abortion.

But, despite the gains in the legislative arena, there are still upwards of 9,000 abortions per year statewide.

Abortion in small town Louisiana is a problem Bullard knows first-hand. Just 15 years old and the daughter of a well-known Christian family in the community, Bullard was shuttled off to an abortion clinic to hide the truth of her crisis pregnancy.

Today, Bullard has embraced her role as a spokesperson to an incredibly inconvenient truth.

“We live in a community where people sometimes want to wear blinders and think, ‘People here don’t really have abortions. That’s not something we deal with.’ God has called me to stand up in the community and say, ‘You all think it can’t happen here, but it happened to me.’ They’ve known me their whole lives, but it opens their eyes to the fact that, yes, it does happen here.”

Tweet This: "God has called me to stand up and say, #abortion can happen here. It happened to me." #prolife

Bullard’s message of breaking through the barrier of small town shame in order to save a preborn life is one she hopes to get across to every client she sees—whether it’s in a coffee shop or a classroom at a local church where she can arrange a meeting.

“I’ve actually been through it, and if I could take it back I would change what I did,” Bullard said. “If I can prevent one person from aborting her child, I want to do that. That’s what I’m called to do.”

Hope in the Next Phase of Ministry

Bullard, whose pro-life advocacy has played out at the state level with Louisiana Right to Life, is continuing to meet up with clients from the area, which includes West and East Carroll Parishes, two of the poorest areas in the state.

So far, she’s been offered meeting space at a handful of local churches, which helps her keep her outreach going despite the physical toll from the fire and water earlier this spring.

In fact, given Bullard’s mindset and back-story, another passage from Isaiah may serve as a more apt encapsulation of 2 Birth and Beyond.

“It’ll be worth it in the end because one thing I’m sure of is God promises to make beauty from ashes,” Bullard said, alluding to Isaiah 61:3. “It’s going to be a bigger, better thing, I’m sure, than we ever thought it could be. I suppose He had bigger and better plans that we had, so He is just wanting us to walk it out.”