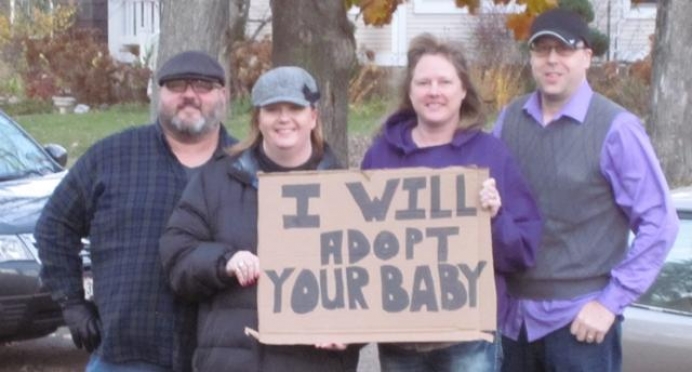 Shown are Patrick and Tiffany Zastrow (Hudson) and Linda and Eric Amundsen (River Falls). That sign is what Patrick said started The Life Movement which helps facilitate adoptions, provides material needs to pregnant women, offers housing to women who need it, and extends friendship and spiritual support. The non-profit helps women in the St. Croix Valley and the Twin Cities.

When Linda Amundson was just 21, she was facing an unplanned pregnancy.

She sought help from Pregnancy Help Line in River Falls (currently Options for Women). The organization put her up with another family for the duration of her pregnancy.

That experience -- being welcomed and loved by a family she didn’t know -- has stuck with her, tucked in the back of her memory.

It’s a pro-life ministry that tries to meet the various needs of pregnant moms who don’t have any other support.

“When I heard about The Life Movement, it clicked,” Amundson said. “I was on board. Eric (Linda’s husband) was like, ‘I won’t hold you back, babe.’”

The Life Movement has four different areas a volunteer can be involved in: Help with adoptions; material needs (like diapers); spiritual counseling and friendship; and housing.

Linda and Eric signed up to house someone at their home in River Falls -- it reminded Linda of what she had experienced before when she had nowhere to go.

Plus, with one of their three adult children out of the home they had the space.

“We have this empty room, why not use it for something good?” Linda explained.

Not long after they signed up, they got a call.

“To be honest, it was scary at first,” Eric said. “But it’s been really rewarding.”

The first woman to stay with them was pregnant. She and her husband were having marriage troubles.

After a few months of separation and counseling, the woman went back to her home before their baby boy, Eloy’sha, was born. They’re doing great, according to Linda.

“I think that first one was just priming the pump,” Eric said.

Their second one came with more challenges.

Kristyn had been living in a shelter away from her abusive “baby daddy.” She also had a long troubled history of drug use.

She arrived to the Amundson home with the clothes on her back Sept. 4 straight from the hospital a few days after she had her baby.

She had nothing else

Not for long. An email blast from The Life Movement alerted the network of about 100 volunteers and in a matter of 24-hours, everything a new mom would need appeared.

How The Life Movement works

Patrick and Tiffany Zastrow created The Life Movement based on something Patrick calls the “lean management” model.

Rather than keep all the goods and services in a brick-and-mortar building, it is spread out all over the city within the network of volunteers.

The goal was to provide whatever a woman needs within 24-48 hours. Sometimes it’s much quicker than that.

“There was a woman (Kristyn) who had her baby but couldn’t leave the hospital without an infant car seat,” Patrick said. “We sent the email out and within 90 seconds, someone said they would buy the car seat.

“They bought it and even delivered it to the hospital within hours.”

Tweet This: #Prolife community striving to meet practical needs within 24-48 hours for moms in crisis pregnancies

How The Life Movement started

Twenty-some years ago, Tiffany accompanied a friend to her abortion appointment.

“I was in my early 20s and from a liberal home, and I didn’t think there was anything wrong with abortion,” Tiffany said. “But I got inside the Planned Parenthood on Ford Parkway (St. Paul) and something just hit me.

“There were about 10 women in the waiting room and it looked like they were just there for a haircut.

“And I thought, ‘this is not right.’ The casualness just really bothered me. And I think that’s when God deposited something in me that day that would grow into The Life Movement.”

Patrick had his own journey that led to forming The Life Movement.

He met a pastor named Ken Krause, from Bloomington, Minn. Periodically Krause stands outside the Planned Parenthood on Cretin-Vandalia in St. Paul with a sign that says, “I’ll adopt your baby.”

Krause invited Patrick to stand with him one day.

“I saw this group of pro-life people and a group from Planned Parenthood yelling and screaming at each other, but that’s not how Krause does it. He just engages people.

“We saw this man come out of the clinic and he just looked like death. Ken asked him if he was OK. The man said, ‘Well, I died this week, my girlfriend is having an abortion. I don’t want her to have and I’m out of smokes.”

The man explained to Kraus and Patrick that when his girlfriend told him she was having an abortion, he overdosed on heroin. He happened to collapse in front of a fire station -- where just the right people could help him.

Kraus asked the man if he could buy him some cigarettes.

“On the way to the gas station, the man broke down and cried in Ken’s arms,” Patrick said. “I realized this was a different way to help people.”

Together, Patrick and Tiffany used their experiences to put together The Life Movement.

“We found out that something like 80 percent of abortions happen because the mom has no support. So we don’t want to just rescue babies, we want to rescue the moms and dads too.”

Eric Amundson said having someone live with them has changed him -- something he wasn’t expecting.

“You have this expectation that you can fix someone in just a few weeks -- but that’s not realistic,” he said. “It takes a lot of effort and prayer. I’ve had to learn patience and compassion and love.”

Eric and Linda bought Kristyn a winter coat and boots. When the woman told the baby’s dad he said, “Why the hell would they do that?”

“When we show this kind of love to people,” Linda said, “they really don’t have a framework to hang it on.”

Article originally appeared Nov. 16 at Hudston-Star Observer. Reprinted with permission of the River Falls Journal. To get in touch with The Life Movement, call Patrick Zastrow at (651) 472-1282 or email This email address is being protected from spambots. You need JavaScript enabled to view it.