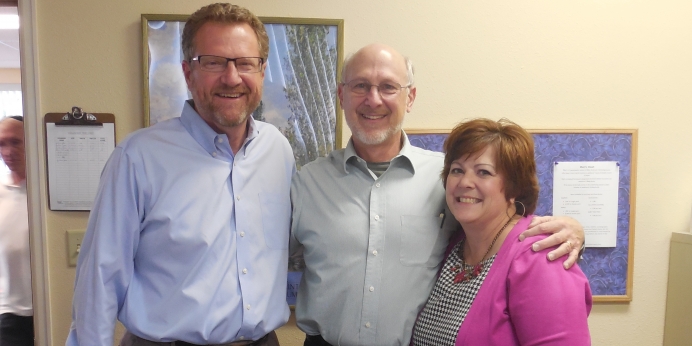 Jenny Langness was unprepared for the breakthrough that would happen at her Colorado centers when she asked God to give her one word at the end of last year.

“I ask God for just one word for the next year. I was on my knees a good six weeks asking for a word. And the word he gave me was ‘breakthrough.’ Little did I know it was going to mean a merger with Catholic Charities of the Archdiocese of Denver,” Langness, executive director of Real Choices Pregnancy Care Centers, said.

Real Choices Pregnancy Care Centers united its centers in Boulder and Lafayette with Catholic Charities of the Archdiocese of Denver Oct. 1 to provide women with an expanded network of pregnancy services. They joined Catholic Charities’ Lighthouse Women’s Center to offer women a more robust continuum of care—from pregnancy through family and child services.

“So far, considering we had never done it before, the transition has been smooth because God’s all over it,” Langness said. “The woman off the street won’t notice anything different. What she doesn’t know is that we can now offer her more than we ever were able to before.”

For a long time, Langness says, she was looking for a way to “franchise” the pregnancy help effort through her centers, saying it puzzled her that while centers worked together in some ways, they were independent when it came to branding and market share.

Even though Real Choices has been in the community since 1974, abortion has a “stronghold” on their communities, Langness says.

“Abortion is the first choice women think of, and sadly a lot of the churches here have bought into the notion that if it’s extending grace to women, it goes into that arena as well,” she said. “Out of about 200 churches in the area, only about 10 support us.”

In hopes of garnering more support from the area churches, Langness reached out to Catholic Charities of the Archdiocese of Denver. She said she wasn’t looking for support, but rather an endorsement that their centers uphold the teachings of the Catholic Church.

But what happened next was a “breakthrough.”

“Catholic Charities came back to us with a much more grand idea, to bring Real Choices under their umbrella,” Langness said, pointing out Catholic Charities’ offer to provide legal defense for the centers.

“I’ve talked about wanting to walk with women for the long term,” Langness said. “Not just two years and try to connect them with other services and hope for the best.  Catholic Charities can walk with families from conception to natural death in many ways.

“We met as a board and decided to move forward with the merger. No one could see a reason not to do it.”

Catholic Charities’ CEO Larry Smith said he loved the idea to make Real Choices one of their ministries.

“I helped shepherd it through, but many, many people on the team effort helped put this together,” Smith said. “What the merger means is that services will continue uninterrupted with all the love that we can possibly provide.  The goal is not to change what Real Choices, but enhance it. It means the women seeking benefits will have access to more resources.”

“Really it’s integrating Real Choices into the entire Catholic Charities network of services,” he said. “So young women have access to more services by just showing up at Real Choices.”

Catholic Charities has taken full responsibility for funding and all aspects of Real Choices, Smith said.

“The combination of Catholic Charities and Real Choices is a perfect example of the call to charity and respect for all human rights, which we heard from Pope Francis during his recent U.S. visit,” Smith said. “In coming together, we believe we’re building a foundation to counter the culture of death and bring life and love to those in need.”

As they moved forward with plans to merge, Langness says it was clear God was working through the details of the partnership. For example, Catholic Charities owns several of the same model of ultrasound machine as Real Choices, so no additional training was needed for the staff to operate at any of the Catholic Charities’ affiliated facilities in the area.

Another example is the crossover in Real Choice’s strategic plan for reaching women with unexpected pregnancies matched that of Catholic Charities, which also oversees Lighthouse Women’s Center in Denver.

“They had the same vision we had. That sealed the deal,” Langness said. “We’re going to do what God has put on our hearts to do. God has given them the same vision, it can’t be a coincidence.”

With a large footprint in Boulder County, where Catholic Charities is still helping residents recover after a devastating flood two years ago, the collaboration with Real Choices extends Catholic Charities’ reach to a new corner of the area.

“So far, Real Choices hasn’t seen anything but a positive response to joining forces with Catholic Charities,” Langness said. “Catholic Charities is about serving people with the love of Christ. You don’t have to convert, we never require people to believe anything or be anything to get services. This is just about Jesus. It’s about the Body of Christ coming together.”

Tweet This: "This is about the Body of Christ coming together." @CCDenver_CO #prolife @KimberlyBender_

Real Choices and its staff of seven employees will continue to offer services at three locations under the umbrella of Catholic Charities. Both Real Choices and Lighthouse provide free pregnancy tests, free ultrasounds, compassionate counseling, mentoring and referral services to women with unexpected pregnancies.

“If we can model what it looks like to come together in this way for women, hopefully more people and centers will want to get on board with that,” Langness said.