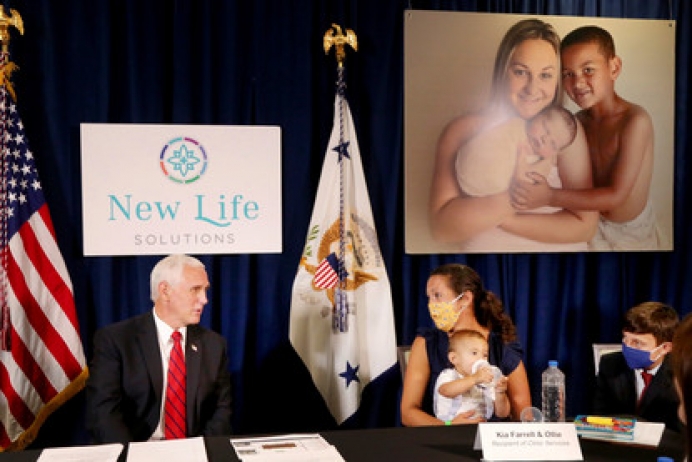 VP Mike Pence meets with Kia Farrell and her son Ollie. Farrell went to Planned Parenthood for an abortion, changed her mind, and went to Heartbeat International affiliate A Woman’s Place Medical Clinic where she chose life. White House

“You know, the pro-life movement doesn’t just talk the talk, you walk the walk,” he said. “And I saw a wonderful clinic and heard about all the volunteers that stepped forward along with registered nurses and healthcare professionals in places, literally, every day, bustling with people ready to not just stand for life, stand with women facing the most difficult circumstances in their lives.”

Tweet This: “You know, the pro-life movement doesn’t just talk the talk, you walk the walk” - Vice President Mike Pence

“The day was so God-honoring and it was a day that celebrated life,” said Charles DiMarco, president/CEO of New Life Solutions, which manages A Woman’s Place Medical Clinic.

During the tour with Pence, DiMarco had an opportunity to share with him the services that the clinic provides, the results and impact over the last 35 years and the last 12 months, as well as share how New Life Solutions remains focused on its mission “to protect the unborn, share the Gospel, and transform our communities – one life at a time.”

“We talked about the life transformation that takes place within the walls both physical and spiritual in nature,” DiMarco said. “We discussed the relationships that are created, and the love, compassion, and grace demonstrated.”

“He was moved and thankful,” DiMarco said.

Pence visited A Woman’s Place Medical Clinic along with representatives from Susan B. Anthony List as the kick-off for the multi-state “Life Wins” tour. The initiative aims to spotlight local pro-life allies and pregnancy center leaders, according to SBA List.

Pence, the SBA List group and HHS Deputy Secretary Eric Hargan met with the pregnancy medical clinic to discuss the pro-life cause, and they also met with Kia Farrell and her children Ollie and Ocean. Farrell is a mom who chose life in 2019 at the clinic after considering abortion and changing her mind once she saw her son on an ultrasound.

The discussion was wonderful, DiMarco said, and included the impact New Life Solutions has had.

“Kia shared her story with the vice president,” DiMarco said. “He was extremely encouraging and affirming to Kia, which was wonderful to see.”

Afterward Pence tweeted about his visit to the pro-life medical clinic:

“Thank you to A Women’s Place Medical Clinic for the work you’re doing to save the innocent lives of the unborn, including 10,000 babies in the last 35 years & 500 babies within the last 12 months. I couldn’t be more proud to be part of the most Pro-Life Administration in history!”

Thank you to A Women’s Place Medical Clinic for the work you’re doing to save the innocent lives of the unborn, including 10,000 babies in the last 35 years & 500 babies within the last 12 months. I couldn’t be more proud to be part of the most Pro-Life Administration in history! pic.twitter.com/rvAQiYcyRk

Tweet This: Thank you to A Women’s Place Medical Clinic for the work you’re doing to save the innocent lives of the unborn- Pence to Heartbeat affiliate

Heartbeat International President Jor-El Godsey congratulated DiMarco and the clinic for their life-saving work being celebrated by Pence.

“We were so excited for the vice president, a consistent and persistent champion for life, recognize the great work you're leading,” Godsey said. “The faithfulness and fearlessness of those who laid the foundation, served and supported in ways big and small, out front or behind the scenes, and those who took up the baton and continued to run the race through the years.”

“What a testimony to God's good work in His good people!” he said.

Pence’s visit comes as the 2020 presidential campaign heats up and the Trump Administration is underscoring its pro-life record.

It comes as well amid the ongoing pro-abortion offensive against pregnancy help centers, which falsely dubs pro-life centers as fake clinics along with making unsubstantiated claims of misrepresentation. Pro-life pregnancy help centers have prevailed in court more than once in cases when challenged on truth in advertising.

A Woman’s Place Medical Clinic offers pregnancy tests, information consultation, well woman care, ultrasounds and SRD/SRI testing. The Clinic states on its website that it does not perform or refer for abortion.

Pence’s visit was historic as he is the first sitting vice president to visit a pro-life pregnancy center, the Daily Caller reports. While the late President Ronald Reagan had often lauded pregnancy centers and former President George W Bush visited a center after leaving office, Pence’s is the first in-person visit while in office.

Pence was also the first vice president to address the March for Life while in office, doing so in 2018 and 2019. He was later followed by President Trump who addressed the 2020 March for Life in person, another first for an American president.

“He was authentically moved by what is happening in the pro-life movement,” said DiMarco. “He deeply cares for the unborn and those most vulnerable.”

After his tour of the pro-life medical clinic, Pence spoke at the Starkey Road Baptist Church in Largo, Florida, where he again praised A Woman’s Place Medial Clinic.

“A Woman’s Place, I learned, is part of New Life Solutions,” the vice president explained to the church crowd. “It’s a ministry that’s been here in Pinellas and Hillsborough counties for 35 years, and their compassionate work has saved 10,000 babies’ lives.”

Pence said that life was winning because of the compassion and love that have been shown to women facing crisis pregnancies across the country for decades.

“The pro-life movement is defined by generosity, compassion, and love for women and unborn children,” he said.

When looking at ministries across the country that are ministering to the needs of women in unplanned pregnancies, “It’s truly inspiring,” he said.

Pence proceeded to tell the church audience about meeting Kia Farrell and Ollie, and how Kia chose life after seeing her son on an ultrasound:

“She said, and I quote, “From the moment that I saw him, I knew I made the right choice.”  And she said, “If I hadn’t found A Woman’s Place and the wonderful women there, I probably would have made a different choice.”

Continuing in his acclaim for A Woman’s Place Medical Clinic, Pence said:

“I met little Ollie today. He was a healthy and exuberant little boy who will turn one-year- old next week. That’s the difference this movement is making, one life at a time, one family at a time.”