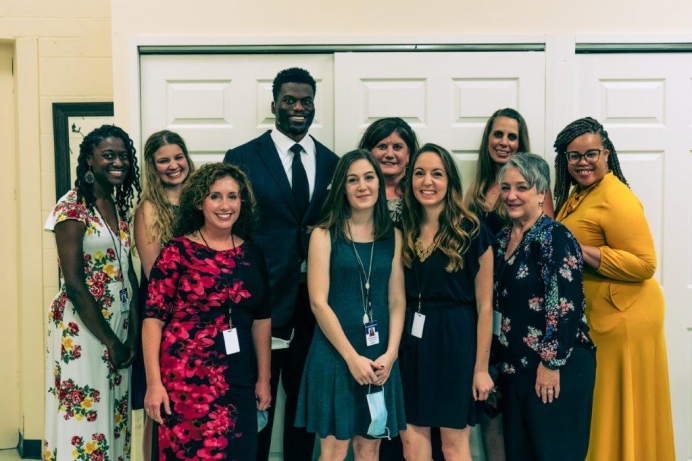 New Hope Family Services in Syracuse, NY, has been on the pregnancy help front lines for decades. The pregnancy resource center and non-profit adoption agency had a recent victory in an ongoing court battle over its adoption services, and New Hope is now expanding efforts to reach abortion-vulnerable clients.

New Hope revealed its new endeavor in partnership with Save the Storks at its 2020 awards celebration and fundraiser held in September.

Pam Daugherty of Save the Storks works to connect and consult with pregnancy help centers to facilitate the process of securing a medical mobile unit.

Daugherty is passionate about the opportunity a mobile unit presents, having suffered in silence for 27 years after her own abortion at age 17.

Mobile units have also given pregnancy help centers flexibility to move as abortion facilities continue to change locations. It is a safe place with options for women, the last line in the defense of the unborn. Being there right at the moment of a woman’s decision to empower them to choose life.

To purchase and equip a medical mobile unit costs about $200,000 and Save the Storks had already secured a $90,000 grant for New Hope, but there was another triumph to come. Daugherty announced at New Hope’s event that at that point funding for the unit had increased to $142,000.

To demonstrate the power of an ultrasound, the New Hope fundraiser live stream included an actual sonogram with a woman at approximately 15 weeks into her pregnancy.

New Hope posted on social media about the partnership:

New Hope and Save the Storks believe that no woman should feel that abortion is her only option. A Save the Storks van will allow New Hope to take our services to women who are most vulnerable. We can take our pregnancy support to the under served in the city and out of town. It will allow us to have a highly visible presence near Planned Parenthood, near college campuses, the local high schools, and we can partner with other Syracuse ministries and churches. It will allow us to reach clients who may have never heard of a pregnancy resource center and the services we offer. We will be able to more effectively reach and serve abortion-vulnerable women.

Watson is the father of seven, and pro-life work has become his passion. Watson’s documentary Divided Hearts of America was released in September.

The documentary which was featured in a Pregnancy Help News article focuses on the surging civil war in America between pro-abortion and pro-life viewpoints.

“The world needs to see people who serve the Lord Jesus Christ, unshaken,” Watson stated at the event. “Things can affect us, but they should not shake our foundation. Jesus is our foundation.”

Watson expressed his passion for the unborn, the vulnerable who are in need, noting that life is a justice issue.

“Your children are a letter to the future,” he said. “Like arrows, we need to sharpen them up to send them out.”

Watson pointed to fatherlessness leading to many social ills; absent fathers as well as abusive fathers or men who remain emotionally distant from their children.

Recalling his oldest daughter’s ultrasound, Watson noted the power of that image.

“She yawned during the ultrasound. It caused me to yawn,” he said. “I caught the yawn from the baby in my wife’s womb.”

In understanding why people feel how they do about the issue of life, Watson stated, “Sometimes what is missing is the willingness to hear someone else’s story.”

This is what motivated Watson to make the documentary along with his wife.

Watson referenced portions of his documentary at the New Hope event, drawing a parallel between the challenges laid out in his film and the pregnancy help efforts of New Hope over the years.

Author Randy Alcorn is one of the experts in different fields interviewed in the documentary.

Quoting Alcorn at the New Hope event, Watson stated, “We must resist the notion that ‘I’m just one person, we’re just one small church, we can’t make a difference.’ You can’t eliminate need, but you can be used of God to meet needs in exciting ways.”

“In the battle for life, we all have a role to play,” said Watson.

Quoting his former coach, Bill Belichick, Watson added, “You are needed, and we need you to ‘do your job.’”

Dr. Ben Carson is featured in the Watson documentary.

Quoting Carson at the event, “When you do an abortion, you’re not just aborting the one child, but also the linage from that child.” In the documentary Carson continues, “You’re obliterating a whole series of individuals.”

Carson also addresses slavery, “Slave owners thought they owned people and they had the right to do anything. What if the abolitionists thought, ‘I don’t believe in that, but you do whatever you want’? With all of the knowledge that we’ve accumulated, can we create life? No. That should tell you it is sacred.”

Watson, focusing in on justice, stated, “We need to be pro-whole, abundant life. Restoring those who have had abortions. Showing love to people who are in your face from the opposing side.”

This theme is continued in Watson’s documentary as he lays out the case that abortion is racism, and that our nation is being torn apart.

Watson expresses concern over the great moral battle that is raging for the soul of our country.

In the documentary the question is asked, “Can anything save us? Yes, it’s love,” Watson continues.

“After searching for truth, I have one final question to ask,” Watson said. “Will we decide to love each other enough to mend our divided hearts? That’s a choice we all have to determine to make.”

"Five minutes after you die, what will you wish you would have done on behalf of the voiceless?” he asked. “We all have a role to play. We need you to get involved, get some skin in the game, because lives are truly at stake."

New Hope responded to Watson’s words, stating, “What an inspiring and powerful message for us all!”