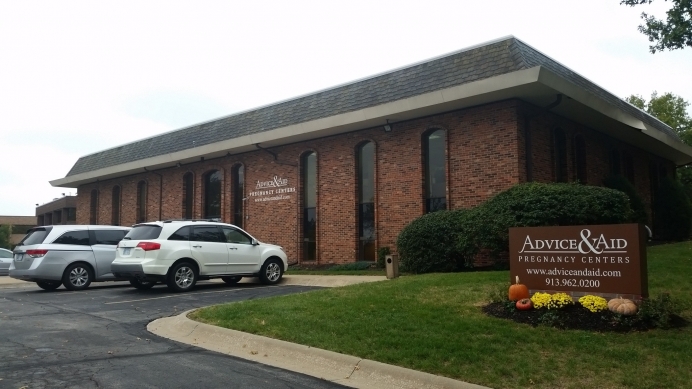 Advice and Aid relocated its Overland Park site across the street from a Planned Parenthood this fall.

Planned Parenthood in Overland Park, Kansas found itself across the parking lot from a new neighbor with a life-saving mission this fall, when Advice and Aid Pregnancy Centers set up shop just a few steps away from the abortion giant.

Advice and Aid had been renting space nearby since 2009, but when the office across the way from Planned Parenthood hit the rental market in 2016, executive director Ruth Tisdale believed this was the perfect time to turn up the heat on the abortion business and give women looking for pregnancy help one last chance to choose life for their babies.

That vision became a reality in September of 2016.

“I passed this building every day and often wondered why we weren’t already there,” Tisdale said. “It’s very strange [to be across the way] because you sense the heaviness of what’s happening next door. It is very difficult for all of us. Every morning you drive here and you sense what’s going on.”

One couple that visited in early January had just left Planned Parenthood. They were looking for help in the midst of their unexpected pregnancy. The only way Planned Parenthood could “help” was to provide an abortion.

“This STI/ STD testing is part of the vision of moving here and offering a service that Planned Parenthood next door also offers,” Tisdale said. “We are not only going to offer it with love and care, but also at no cost. We are excited about that.”

A group of local Christians began praying regularly at Johnson’s clinic, and she eventually left the abortion business altogether. That group would become known as 40 Days for Life, and they would eventually not only see the end of Planned Parenthood’s abortion facility, they now run their own offices out of the building and rent space to a pregnancy center.

Meanwhile, Johnson, among many advocacy roles, has founded “And Then There Were None,” an outreach focused on rescuing workers from the abortion industry. Writing at TheHill.com recently, Johnson cited a former Planned Parenthood worker who just left the Overland Park location, which she says only offers two services: pregnancy tests and abortions.

Tweet This: #Prolife ctr in Kansas relocates next to #PlannedParenthood @AbbyJohnson @40DaysforLife

“Rhyan [the former worker] told us that while working for Planned Parenthood, she had been instructed multiple times she should work to ‘increase their revenue’ inside the clinic, Johnson wrote. “‘We were told that we needed to push abortion services, as that was the service that generated the most income,’ says Rhyan.”

Johnson came out for an on-site training to help train Tisdale and her team on what to expect—and how they should approach their new neighbors.

“One of the things she shared was that you don’t know the impact you’re going to have on the Planned Parenthood staff just by being here,” Tisdale said.

Even though the relocation was only a move down the street, Tisdale considers the fact that Advice and Aid is in such proximity to Planned Parenthood is a work of God. For years, Tisdale says, she had driven past the location and wondered aloud why her center wasn’t there.

By the time the office came up for rent, Advice and Aid had just signed a four-year lease at their previous property, which seemed like a long shot to cancel.

“Some of the staff and I started conducting prayer walks by the abortion clinic and by this building,” Tisdale said. “The Lord led me through the book of Joshua about being strong and courageous. ‘Everywhere you set your foot I’m going to give you that land.’ I finally had the opportunity to meet with the owner of that building. He was willing to rent to us.”

Tisdale, who has served in her current role since 2013, says she didn’t know anyone who’d had an abortion before she got involved with the center, which was founded in 1986.

She’d heard about an opening as director of client service from a friend at her church just at the time when her husband had been injured and his income needed replaced. As a stay-at-home mom who had been working part-time, Tisdale immediately gained a passion for the women she was serving.

Then, in her late 30’s, Tisdale and her husband faced an unexpected pregnancy of their own. Her husband was still on disability and they already had one child in middle school and another in late elementary school.

“I was ashamed because I felt irresponsible. We were on a limited budget,” Tisdale said. “God reminded me what I told the women I meet with. ‘You can do this. God doesn’t make mistakes.’”

Tweet This: "My daughter is the sunshine of our family. I'm so glad God planned her." #prolife

Since then, God has used Tisdale’s own story to give her even more compassion for other women facing unplanned pregnancies.

“By the world’s standards I would be the perfect woman to have an abortion,” Tisdale said. “‘You can’t afford it.’ ‘You’re too old.’ ‘Your husband is sick.’ ‘You already have kids.’ ‘You work too hard.’

“My now 9-year-old daughter is the sunshine in our family. She has been a tremendous blessing during some very difficult moments. I’m so glad God planned her.”

For now, across from Planned Parenthood, Tisdale is praying for a greater influx of women who are in desperate need of help.

“We are telling them the truth with grace—grace so they won’t despair, truth so they won’t be deceived,” Tisdale said. “They are told, ‘You are not condemned. God can restore you. He can make anything beautiful.’”